Renowned linguist and public intellectual MIT Professor Noam Chomsky offers his take on the Trump administration and its troubles with Russia. 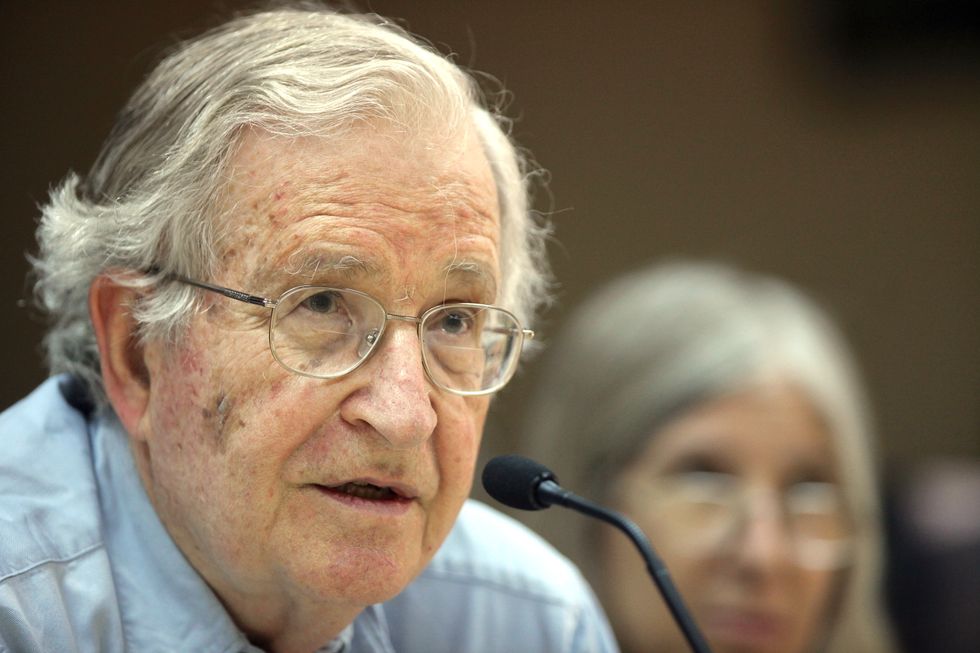 Noam Chomsky has generally been one of the strongest intellectual voices of the left for decades. But he has an unexpected take on the growing scandal around President Trump and the alleged “collusion” with Russia. The 88-year-old MIT professor Chomsky, a celebrated linguist and philosopher, thinks that the Russia story is a major distraction and it’s wrong for Democrats to focus their energies on it.

In an April 6th conversation, organized by the American Association of Geographers, Chomsky characterized President Trump as not having a strong center of beliefs, while “his only ideology is ‘me’. What is instead happening is that Republicans, led by Paul Ryan, whom Chomsky called “the most dangerous and savage group in the country," are implementing “savage” programs that they planned for decades designed to favor the rich and “kick everyone else in the face.”

This kind of planned attack is supported by how Trump’s cabinet was designed, according to Chomsky.

“Every cabinet official was chosen to destroy anything of human significance in that part of the government. It’s so systematic that it can’t be unplanned. I doubt that Trump planned it,” says Chomsky in the conversation.

And to distract attention from their real agenda, the Trump team is running a “two-tiered operation,” claims Chomsky, with advisor Stephen Bannon in charge of “the effort to try to make sure you capture the headlines.” With one outrageous incident at the White House or incendiary tweet succeeding another, President Trump is keeping the media occupied and people talking. And what happens is that they very soon forget whatever the latest scandal was and move on, while the real issues get left unexplored.

See the segment of the interview on Trump and Ryan here:

Chomsky also called out Democrats for “cooperating in a very striking way”. The biggest part of that cooperation is their insistence on stoking the Russian scandal and making it a major distraction from more significant problems. Chomsky thinks that finding a common language with Russians is essential even if you believe they hacked the 2016 elections. The United States has not only influenced elections, it has even installed military dictatorships overseas and cannot claim moral high ground here, explains the professor.

A better way would be to look at what happened through the prism of diplomacy, even if members of the Trump team met with Russians, including the now-infamous meeting between Donald Trump Jr. and a Russian lawyer. In fact, President Trump’s attempts to improve relations with Russia is “one of the few decent things Trump has been doing,” says Chomsky.

“So maybe members of his transition team contacted the Russians. Is that a bad thing?” expounds Professor Chomsky. “Recent ambassador to Russia, Jack Matlock, had a blog where he pointed out that ‘It’s exactly what you should be doing. It’s the job of ambassadors and diplomats coming in. There are serious problems and tensions you want to talk over to see if there’s anything you can do about them. Instead of just building up force and violence.’ That’s what the democrats are focusing on, and meanwhile all these other things are going on and they’re not saying anything about them.”

In a recent interview with RT, Chomsky doubled down on his criticism of the Republican Party, which he previously called an organization “dedicated to the destruction of organized human life on Earth.”

"The position of the savage wing of American capitalism, the Republican Party, is really striking, they are really racing toward a precipice. Has there really been an organization in history that has dedicated itself to the destruction of human life?" said Chomsky. ”The US is racing toward the precipice, while the world is trying to do something.”

Here’s the full interview with Professor Chomsky at the American Association of Geographers: