From Living Inside Asteroids to Solar Arks, a Scientist Designs the Space Colonies of the Future

New research explains how to build different types of outposts in space. 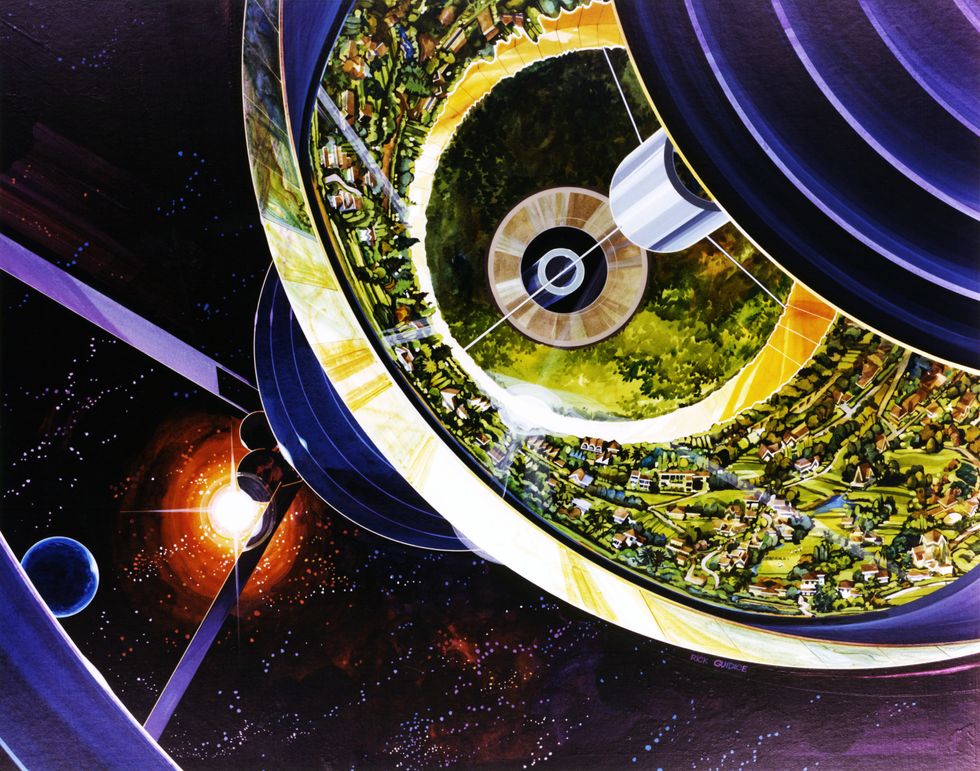 The next several decades are likely to be revolutionary in humanity’s relationship with space. Instead of just the select few astronauts, a much larger portion of the planet’s population, perhaps hundreds of thousands, could start traveling into the cosmos. They would go on long journeys to faraway planets like Mars, staff the first colonies on the moon and beyond, become asteroid miners and engage in many other professions that will be necessary as we explore this new frontier. But what will these first outposts in space look like and how will they work?

Grandl provides a clear imperative for the humans to go to space, calling planet Earth "just the cradle of mankind.” According to Grandl, if we want to survive as a species, we need to “stretch the concept of nature beyond the biosphere” and understand “cosmic evolution”. And within that larger cosmic view, there is no reason to stay put on Earth, with all its dangers and scarcities.

The first place we should go? You guessed it - the moon.

Grandl thinks that humans will return to the moon in the 2020s, building a lunar base on and below the surface. The purpose of the outpost would be both for research and for learning to utilize the moon’s resources. Helium-3 (a rare isotope of helium), iron, aluminum, titanium and more can be extracted from lunar materials. Farther down the line, the moon base would produce fuel for spaceships on their way to intergalactic destinations.

Initial modular lunar base. The figure shows the initial stage of six modules with one additional module (to the left). Credit: Werner Grandl.

The initial lunar base would consist of 6 cylindrical modules made of lightweight aluminum, 17 meters long and 6 meters in diameter. One module would house 8 people. The modules would each have different functions in the base - one would would be dedicated to generating energy and communications. There would also be modules for a central gathering area, an airlock, laboratory, living quarters with private rooms for each person, and a spare module for enlarging the base.

Urban structure on the Moon, built of standardized modules (Grandl, 2010)

Another possibility for a lunar base location and design - put it into an underground “lava tube” - a natural cave under the surface, for example into the Mare Tranquilitatis Hole (MTH). Advantages of an underground base can be numerous, from providing water within their soil, to reducing the effects of cosmic rays and offering better temperature conditions.

Grandl envisions that another place where humans might eventually find themselves would be in colonies dedicated to mining asteroids. Near Earth Asteroids could provide rare-earth elements and metals like platinum, which would be easier to extract than on Earth, without worrying about environmental pollution or politics. One kind of colony that would spring up to support this mining would be a manned space station connected to the asteroid. The station would have all the necessary equipment and staff for the mining process.

Once a particular asteroid has been tapped out, if it’s larger than 400m in diameter, its hollowed-out insides could be big enough to support a rotating human colony of more than 2,000 inhabitants. Water, oxygen and building materials would be extracted from the asteroid itself.

The premiere space colony envisioned by Grandl and his team is the Solar Ark. It would be cylindrical in shape and have artificial gravity. This idea of needing to create gravity was actually first proposed by the Russian scientist Konstantin Tsiolkovsky, one of the founding fathers of rocketry and astronautics, who was also the first to advocate creating large colonies around Earth.

Why would we need artificial gravity? The lack of gravity in space can be dangerous to human health, with such issues as bone demineralization and atrophying of muscles. In order to avoid these negative effects, gravity could potentially be simulated in space by employing “centrifugal forces.” According to calculations by the NASA engineer Jesco von Puttkamer, a space station that’s 50 meters in radius and rotates at the spin rate of 4.2 rpm would create an artificial gravity of 1G.

The Solar Ark would be one such massive colony that could range in length from 2.3 km to 8km, with its diameter ranging from 900 m to 3.2 km. The larger colony could be home to up to 250,000 inhabitants.

The Ark would also feature an artificial climate, and would be illuminated by capturing sunlight via a system of parabolic mirrors (hence its name Solar Ark). Its hull would be covered by an outer and inner aluminum "membrane", with external thrusters adjusting the rotation and direction of the colony. The outer membrane would also be shielded by layers of foamglass with little thermal conductivity, protecting against meteorites and radiation.

A free-floating structure near the colony would protect it from solar flares.

How far in the future are these plans? Most technologies needed to make such ideas a reality, other than artificial gravity, are already available, says Grandl.