Have you ever considered controlling a group of animals with your thoughts? You could have them attack your enemies, protect you, pull off heists, and just in general, do your bidding. We marvel when characters, like Aquaman, Vixen, Cinderella, Willard, or the Rat King, communicate with animals, and send them off on missions. But could such a power ever exist in real life?

Perhaps we couldn’t form human-like alliances with other organisms. But we could control their movements with our mere thoughts, which in a way, is even more astounding. This was made evident in a study published recently, in the Journal of Bionic Engineering.

Here, South Korean researchers developed a system, using a brain-computer interface (BCI), to make an animal obey the thoughts of its controller. The scientists likened it to the 2009 movie Avatar, where a human controls an alien body with his mind.

Researchers at the Korea Advanced Institute of Science and Technology (KAIST), proved that with their system, they could control the movements of a turtle. Sure, it’s not a man eating tiger or a pair of shoplifting ferrets. Not even a vicious snapping turtle that could say, cleave a tree branch in two. Just your average, run-of-the-mill turtle. But hey, science has to start somewhere.

The truth is, the ability to control another organism with your mind is still pretty amazing. Thanks to advances in computing and electronics, previous studies have shown that we can control machines with our thoughts, such as a prosthetic limb, a car, a drone, or even a robot. It’s also been used to read another’s thoughts—through a series of Morse code flashes that were projected behind the “listener’s” eyes. 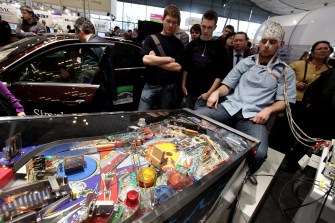 Man controls a pinball machine with his mind. Getty Images.

There’s been work in inter-species mind control too, involving insects. Experiments with cockroaches and locusts have shown some success. Scientists are currently working on being able to hack a dragonfly and control where it goes. Equip it with a little digital camera and you’ve got a pint-size spy. Still, those methods are invasive.

Professor Pil, Seung-Lee, of the Mechanical Engineering Department and colleague Sung, Ho-Jo of the Computing School, decided to take a different approach. They created “a conceptual system that can guide an animal’s moving path by controlling its instinctive escape behavior,” according to the press release. They chose to work with turtles specifically, because it has a certain level of cognitive ability. Also, they can recognize white light and instinctively move toward it. So how does the system work?

KAIST scientists decided to tap into the turtle’s instincts, in order to control it, its escape behavior. Turtles naturally move away from obstacles or hazards and towards white light. So researchers decided to hack this predictable behavior with a BCI.

Their system includes a swiveling half-cylinder that surrounds the turtle’s head, only letting a small window of light through. The semi-cylinder can move up to 36 degrees in either direction. By placing white light in the direction in which the operator wants the turtle to go, he or she can “drive” and “steer” it. 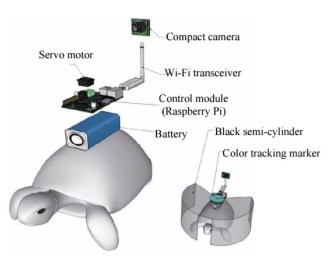 The BCI-HMD system. By: KAIST.

The operator in this study wore a rig, composed of a brain-computer interface (BCI) combined with a head-mounted display (HMD), now known as the BCI-HMD system. Meanwhile, the turtle wore a “cyborg system,” mounted on its shell. This includes a computer control module (a Raspberry-Pi), a servo motor, a battery, a Wi-Fi transceiver, and a video camera.

So how does it work? The operator can see the live video feed from turtle-mounted camera, through the HMD. Using the feed, the operator decides where the turtle should go. Here’s the really amazing part.

Through thought commands alone, electroencephalography (EEG) waves, or brain waves, the operator can move the cylinder, altering the direction the light comes from, and so telling the turtle to move left or right, go forward, or remain stationary. This signal travels through the BCI to the turtle’s rig, via Wi-Fi.

Researchers tested it on a variety of surfaces including grass and gravel, and with a number of different obstacles in the turtle’s path, such as trees or shallow water. In each test, the operator was able to maneuver the turtle expertly. Scientists believe these findings could help improve virtual and augmented reality, and also be used in surveillance and military reconnaissance. After all, who would suspect a friendly, nonchalant turtle? One drawback though, it isn’t exactly the fastest critter, which counts when it comes time to making a clean getaway.

It’s the very closest stars to us that hold the key to unlocking the possibilities for life in star systems all throughout the Universe.
Up Next
The Present

A team of researchers analyzed 1,280 suicide notes written between 2000 and 2009 to seek a new prevention strategy.