Artificial intelligence has so far replaced more menial labor, but could it one day soon come for the more analytical positions in the economy like writers and reporters? What will become of journalism? 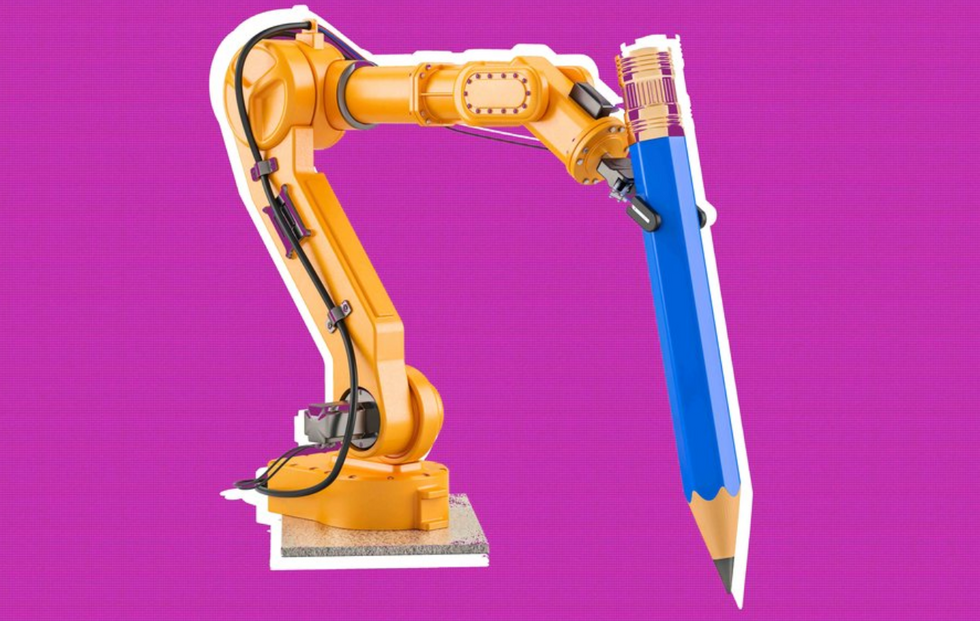 An automated robot holding a pencil, ready to file on deadline. (Shutterstock/Big Think)

At his desk a few years ago in the Bloomberg newsroom, Damon Kovelsky sensed the change coming: automation, artificial intelligence. Bots, crawlers, borg. Would it come for his job, he wondered? To stay relevant as well as employed, the married New York father made a choice.

“Automation was reaching a point where it could do what I was doing, and I tried to get more involved in the process’’ said Kovelsky, 42, who wrote headlines, breaking news blasts, and combed Securities and Exchange Commission filings at the financial newswire. “There were some short-term projects. It didn’t pan out.”

Earlier this year Kovelsky was let go from Bloomberg News. AI, he believes, had a part in ending his 12-year employment. He estimates that one-quarter of his tasks were taken by software that crawled filings and press releases for news and flashed headlines automatically. Another recently unemployed journalist, who requested anonymity to speak on the record, said that as much as 60% of her tasks had become automated over the past few years.

Bloomberg is hardly alone in taking headline and story-writing functions from humans and turning them over to AI-powered systems. Rival wires Associated Press, Dow Jones and Reuters, papers including the Washington Post and New York Times and online providers like Yahoo and Quartz are relying more on computer-driven, automated journalism.

Competition is in part driving the surge in automated reporting. News is a nonstop cycle that has to be delivered fast, and technology that meets this need will be adopted. Automated reporting, which relies on computers filling in pre-written templates and bots crawling documents to flash headlines faster than humans can ever do, gives news agencies an edge. This is critical when wins are measured in milliseconds.

Big newsrooms, in addition to battling each other, have a newer challenge that doesn’t necessarily play by the rules: upstarts whose journalists need little more than a Twitter account to get their stories out. Anyone with a phone can break news, and AI can help corporate newsrooms beat bloggers and hungry independents who can post items for free on YouTube and Facebook.

Despite AI’s steady march, measuring the impact on the careers of writers and editors is little-studied, according to those watching from the outside. Teri Hayt, Executive Director of the American Society for News Editors at the Missouri School of Journalism, said that if there’s a discussion about automation causing job losses, then “I’m not aware of it.”

Chris Roush, editor and founder of TalkingBizNews, in Chapel Hill, N.C. and professor of business journalism at University of North Carolina, Chapel Hill says “There’s no evidence AI is leading to cuts in reporting jobs.”

The AI story told by news agencies says that reporters are being liberated from the more data-driven stories like sports and quarterly corporate earnings to focus on more investigative pieces. “Most wire services -- AP, Bloomberg, Reuters and Dow Jones -- are using AI to find news or write basic types of stories. Still, Roush says, newsroom journalists are aware of coming automation. “Reporters are concerned their jobs are on the line.”

“For us, AI is an additive tool that enhances our journalism and our products, but not something that could replace the sophisticated analysis of our reporters," Dow Jones spokeswoman  Colleen Schwartz wrote in an email. “We are eager to continue making use of AI in the newsroom.”

Jay Miller says he’d been warily watching as newsrooms adopted more automation since he started in news at Dow Jones in 1997. Miller moved to Bloomberg in 2010 and was laid off in late 2016. He’s not sure AI cost him his job but says his layoff coincided with increasing use of automation on Bloomberg’s First Word desk. Bloomberg Editor-in-Chief John Micklethwait announced in April 2016 that automation is crucial to the future of journalism. Bloomberg didn’t reply to requests for comment for this article.

“Anything that has to do with numbers that can be plugged into a template, that’s the low-hanging fruit,” Miller, 47, of Jersey City, N.J. said. “If you’re in that area, I don’t know … I’d advise people to be multi-dimensional.”

Seth Lewis, associate professor at the University of Oregon School of Journalism and Communication, said that he, too, hadn’t been aware of automation taking newsroom jobs. Nevertheless, “In the aggregate, it leads to displacement. If the machine is doing a greater share of that task there will be replacement.”

Despite AI’s looming shadow, Miller says computers won’t completely replace humans. Rather, he sees an uneasy truce where machines handle the data-driven stories and people, well, write about people. “Anything that can be commoditized will be. We’ll never be as fast as computers. But the things that require more color I don’t ever see being automated.”