There seems to have been a profound difference in cognitive abilities between early Homo sapiens and our immediate predecessor, Homo erectus. Sure, erectus stood upright — a big, um, step forward — but with the emergence of Homo sapiens, we see traces of art, pictography, and tool usage, and we believe humankind made its first forays into language.

In the early 1990s, psychedelic advocate and ethnobotanist Terence McKenna published his book Food of the Gods in which he surmised that Homo sapiens‘ cognitive leap forward was due to their discovery of magic mushrooms. The scientific community never took McKenna’s theory very seriously, considering it mostly trippy speculation — these days, his ideas have largely been relegated to the spacier corners of Reddit. Now, however, the idea has acquired a new advocate, psilocybin mycologist Paul Stamets, who’s suggesting McKenna was right all along. 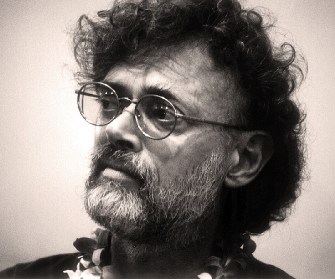 In McKenna’s Stoned Ape hypothesis,” he posited that as humans began to migrate to new areas, at some point they came upon psychedelic mushrooms growing in cow droppings, as is their wont, and then ate them. After ingesting them, and more specifically the psilocybin they contained, their brains kicked into overdrive, acquiring new information-processing capabilities, and a mind-blowing expansion of our imaginations in the bargain. Many modern users of psychedelics claim the world never looks the same again after such an experience. As McKenna put it, “Homo sapiens ate our way to a higher consciousness,” and, “It was at this time that religious ritual, calendar making, and natural magic came into their own.” 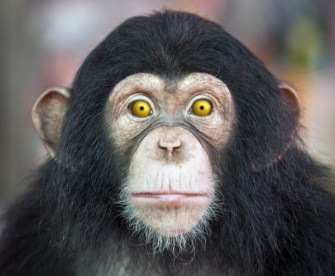 The return of the stoned ape

Regarding this theory, Stamets presented “Psilocybin Mushrooms and the Mycology of Consciousness” at Psychedelic Science 2017. In his talk he sought to rehabilitate McKenna’s hypothesis as a totally plausible answer to a longstanding evolutionary riddle. “What is really important for you to understand,” he said, “is that there was a sudden doubling of the human brain 200,000 years ago. From an evolutionary point of view, that’s an extraordinary expansion. And there is no explanation for this sudden increase in the human brain.”

Why not mushrooms? Stamets portrayed a group of early humans making their way through the savannah and happening across “the largest psilocybin mushroom in the world growing bodaciously out of dung of the animals.” It needn’t have been unusually large to have its effect, of course. In any event, he invited the crowd to suspend their disbelief and admit that McKenna’s idea constitutes a “very, very plausible hypothesis for the sudden evolution of Homo sapiens from our primate relatives,” even if it’s an unprovable one.

The audience’s response was reportedly enthusiastic, though it’s fair to note that these were people attending a conference on psychedelic science, and thus pre-disposed toward such chemicals’ importance. 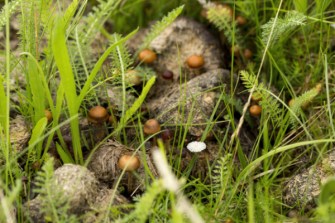 Certainly, there’s general agreement on the mystery Stamets cited, if not so much on timing details. And consciousness, the “hard problem” even in its modern form, is an area rife with unanswered questions. What is consciousness, anyway? Is it a simple enough thing that it could have a single root cause as McKenna and Stamets say? Many experts suspect our brains gained new capabilities as the result of early community ties and the requirements of social interaction, but when?

Anthropologist Ian Tattersall tells Inverse that the where seems obvious enough: Africa, “For it is in this continent that we find the first glimmerings of ‘modern behaviors’. . . But the moment of transformation still eludes us and may well do so almost indefinitely.”

There are other researchers who’ve studied early humanity’s use of drug plants but who are skeptical of the stoned ape notiion. Elisa Guerra-Doce, an expert in the field, considers the idea too simplistic, potentially a reduction of a complex evolutionary process into a single “aha” — or maybe “oh, wow” — moment. She’s also troubled by there being little evidence of such a pivotal moment, or of drug use at all, so early in the archeological record.

Amanda Feilding of the psychedelic think tank Beckley Foundation says, however, that the stoned ape theory is at the very least a valid reminder that humans have always been drawn to and fascinated by mind-altering substances: “The imagery that comes with the psychedelic experience is a theme that runs through ancient art, so I’m sure that psychedelic experience and other techniques, like dancing and music, were used by our early ancestors to enhance consciousness, which then facilitated spirituality, art, and medicine.”

Just how early our love affair with hallucinogenic states began may have something to say about the plausibility of McKenna’s hypothesis, but, alas, we don’t know when that would have been. And, as the saying about the 1960s goes, even if any of these people were still around to ask, anyone who was really there wouldn’t be able to remember.

Tags
apesarcheologyconsciousnessevolutionevolutionary psychologyintelligencelanguagemushroomspsilocybin
In this article
apesarcheologyconsciousnessevolutionevolutionary psychologyintelligencelanguagemushroomspsilocybin
Related
13.8
Why the origin of life and the Universe itself might be forever unknowable
There might be a hard limit to our knowledge of the Universe.
The Past
Riddle solved: Why was Roman concrete so durable?
An unexpected ancient manufacturing strategy may hold the key to designing concrete that lasts for millennia.
What psychedelics can’t explain
Can psychedelics solve the ‘hard problem’ of consciousness? A Johns Hopkins professor explains.
▸
4 min
—
with
Matthew W. Johnson
The Past
Giant “toothed” birds flew over Antarctica 40 million to 50 million years ago
The spikes in their mouths would have helped them catch squid or fish.
Neuropsych
The hypersane are among us, if only we are prepared to look
Carl Jung was one such person.
Up Next
Life
Remembering Peregocetus pacificus — modern whales’ otter-like ancestor
The new fossil offers insight into when whales returned to the oceans millions of years ago.