A lot of attention has been given to the negative consequences of social media on the human psyche. Likewise, specific and long overdue workplace issues are under dissection: gender discrimination and sexual harassment, fair pay, and surviving in the “gig economy.” One lesser discussed yet pervasive topic is now being looked at: incivility.

Given all of the incivility in social media, that it seeps into our workplace is not surprising; it was there long before we could tweet out unthinking nonsense at strangers. In some ways we’re becoming, by the day, a less empathetic culture. A recent study, published in the Journal of Occupational Health Psychology, pinpoints one major issue arising from rudeness at work: sleep problems.

The team, comprised of researchers in Oakland, Portland, and Missoula, Montana, used a microcosm to better understand macro effects. Their research is based on a survey of 699 U.S. Forest Service employees. Specifically, they wanted to know if rude co-workers caused them to have trouble falling or staying asleep. The answer was a resounding yes.

The team notes that a lot of research on this topic has focused on antecedents and outcomes, yet there is a dearth in the literature on why incidences of rudeness are associated with detrimental outcomes. By identifying these relationships, they feel that they might effectively pinpoint solutions for buffering yourself from the negative effects of dour attitudes.

Likewise, attention has been given to negative health outcomes, such as cardiovascular disease, negative mood, and increased blood pressure, while less has been devoted to how incivility affects sleep. When workers disengage from work, more health problems pile up, such as increased strain, burnout, depression, and reduced life satisfaction.

Lack of sleep contributes to the aforementioned health problems. By zeroing in on that particular issue and offering techniques for shielding yourself, these downstream effects can be reduced.

Oakland University assistant professor Caitlin Demsky, one of the authors of the study, became interested in the topic after observing how incivility affected her own mental well-being, as well as that of family and friends. As she says:

“Workplace incivility is an extremely common workplace stressor, unfortunately, and I have devoted much of my work to understanding how and why incivility affects employees both at work and outside of work. Given the prevalence of incivility, I am also interested in understanding ways in which organizations and employees can protect themselves from the negative effects of incivility.”

To understand why incivility results in sleep issues, the researchers used two psychological models. The perseverative cognition model of stress posits that rumination over negative events leads to negative health outcomes. A co-worker is rude and you mentally play out the instance over and over, creating a negative feedback loop. This model has been shown to reduce cortisol and cardiovascular recovery time, implying that the fight-flight-freeze mode of your nervous system remains ramped up, hours and days after the event has occurred.

The effort-recovery model states that recurring workplace stressors add up over time. Isolated incidents repeat, contributing to chronic health problems. Being preoccupied with work when work is no longer happening perpetuates, adding to your cognitive load.

The combination of these two models appears to contribute to insomnia. Not only does rudeness set off your nervous system in a detrimental fashion, it also leads to increased self-blame and higher levels of rumination. Despite your attempts to “let go” of troubling instances, they remain in your consciousness well into the midnight hour.

The researchers suggest that the key to dealing with this problem is creating psychological detachment from incivility. Translation: Engage in activities between work and bedtime that reduce stress and take your mind off these issues. Ruminating and escape mechanisms, such as drinking alcohol and scrolling through social media late at night, do not contribute to positive health outcomes. Instead, the authors offer one word: relaxation. 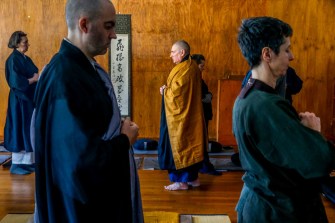 (Photo by: Godong/UIG via Getty Images)

Numerous means for relaxing exist. In the paper, the researchers mention five to help build a psychological buffer:

Exercise. There is no shortage of literature supporting the fact that moving your body relaxes you. Cardiovascular exercise stimulates the production of endorphins while reducing levels of cortisol and adrenaline—one of the exact problems that rumination causes.

Volunteering. I’m currently reading Trillion Dollar Coach, an homage to the legacy of Silicon Valley coach, Bill Campbell. The authors note that while bookshelves are lined with endless “self-help” books, few are “help-others” focused. Volunteering has been shown to lower blood pressure and elongate life span. Often, it isn’t all about you, and you can benefit by moving out of your own way in the service of others.

Meditation. Reducing blood pressure and pain; tamping down certain psychological disorders; reducing anxiety, depression, and insomnia—these are just a few of the benefits of meditation. This is one of the most well-studied and verified techniques for calming an overactive nervous system.

Taking a walk. As Rebecca Solnit writes in her tribute to walking, Wanderlust: A History of Walking, “Thinking is generally thought of as doing nothing in a production-oriented culture, and doing nothing is hard to do. It’s best done by disguising it as doing something, and the something closest to doing nothing is walking.” In other words, a great way to get your mind off of it by putting it elsewhere. And yes, walking reduces stress and boosts creativity as well.

Listening to music. The journal that published this study is run by the American Psychological Association, a resource rich in details on the relaxing power of music. From pain treatment and stress reduction to sleep aid, identifying the right music can do wonders to a person. For a deep dive on this topic, check out neuroscientist Dan Levitin‘s work.

While the emphasis of this study is placed on buffering techniques utilized by the worker, Demsky notes that employers also play a role in mitigating the effects of stress on their employees as well. She concludes:

“While our research focused on specific employee behaviors that can help protect victims of incivility from sleep problems (i.e., psychological detachment from work, relaxation), organizations play an important role in addressing workplace incivility as well as encouraging employees to take time away from work to recover. This may be through explicit policies or modeling strategies such as supervisors avoiding sending work-related communications outside of work hours.”

Tags
bullyingcommunicationdepressionemotionspsychologysleepworkwork-life balance
In this article
bullyingcommunicationdepressionemotionspsychologysleepworkwork-life balance
Related
Sponsored
4 misleading personal finance tips
Personal finance advice is often over-simplified and fails to consider economic research or people’s unique circumstances.
Thinking
Bonhoeffer’s “theory of stupidity”: We have more to fear from stupid people than evil ones
Evil is easy to identify and fight against; not so with stupidity.
Health
What decades of research tells us about living the good life
Warm relationships protect your mind and body from the slings and arrows of life.
Neuropsych
Shopping with your nose: How body odors influence your buying behavior
Sniffing out a deal.
Sponsored
How to change the subtle money habits that shape your daily spending
These 5 research-backed tips can turn bad habits into financial gain.
Up Next
Starts With A Bang
Fantasy Genetics Is The Most Important, And Worst, Science In Game Of Thrones
Who should sit atop the iron throne? Let your DNA decide.Here on Earth, we hold one important truth to be self-evident above all others: that all humans are created equal. There […]