Caught in a whirlwind of passion, Justin Bieber tattooed Selena Gomez on his wrist—ink he now regrets. He’s not alone: Johnny Depp had to reimagine his affirmation to Winona Ryder on his shoulder. There are other reasons for tattoo regret. Demi Lovato needed a cover-up when her vagina tat no longer inspired, while Adam Levine can’t stand the “cauliflower sun” on his right shoulder.

Tattoo regrets are not only for celebrities. Revenue from tattoo removal services have increased 440 per cent over the last decade; this particular service is projected to hit $83.2 million next year. It is an especially incredible number given that exactly zero tattoos are mandatory. These are all self-inflicted wounds creating an entire business model based on regret.

According to New Yorker staff writer Kathryn Schulz, 17 per cent of Americans regret their tattoo decisions. One 2015 study in Colorado found that a third of tattooed adolescents would change their minds, though that number does appear to decrease as we age.

“Older respondents report less regret, and this part of the finding perhaps is more telling because at least some of these respondents got their tattoos when they were younger,” write the authors of the 2015 study. “Men report more regret, and this finding most likely is due to their tendency to get larger tattoos and to get them in places that cannot be covered as easily as tattoos on women.” 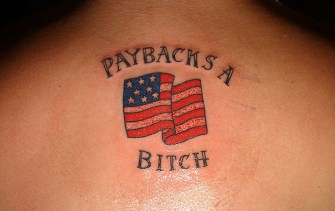 A brand new tattoo on a woman’s back expresses her desire for revenge. In 2001, Addictions Tattoo in Midway City, CA, was giving away free tattoos that express the feelings of nationalism that swept the US in anticipation of America’s retaliation for the 9/11 terror attacks. (Photo by David McNew/Getty Images)

Schulz certainly regrets her tattoo. Unlike Bieber and Depp, who probably only regretted their decision when the serotonin and oxytocin dried up, she felt remorse the moment she walked out of the shop.

Schulz uses tattoos as an entry point for discussing regret, which she defines as an emotion we feel when we believe the present can be better if only we’d done something differently in the past. While the quasi-New Age, quasi-hyper-masculine notion that humans should live without regret persists in our culture, she advocates for a more compassionate approach.

According to Schulz, regret requires agency and imagination. That is, we have to realize we made a decision and we have to imagine a different choice could have existed. The more we have of either of these, the more acute the regret will be.

Tattoos rank fifth in overall regrets. Parenting decisions rank fourth at 10 per cent; romantic decisions, 15 per cent; career is at second at 22 per cent; the winner is education, 32 per cent. Nearly a third of all regrets have to do with what we studied (or didn’t study).

The four psychological components of regret are denial, bewilderment, punishment, and perseveration, which is when you focus on the same thing over and over and over. Schulz recalls lying in bed the evening after permanently sketching a compass on her shoulder. In her bewildered mind she repeated a common mantra of the aggrieved: “Make it go away.” Saying it once is not unusual; having it play on loop is perseveration.

Instead of letting it fester, Schulz decided upon a different tack. She finds it healthier to expose yourself “to your own vulnerability in the face of an indifferent universe.” Staring at your regret in the mirror, painful as it seems, is better medicine than pretending it doesn’t exist.

Modern society makes it easy for us to avoid our problems. We simply need to unfriend or unfollow those we don’t agree with. Tech companies are even doing this job for us with filters that allow you to block words you don’t enjoy seeing or reaffirm your biases by repeating posts you enjoy. It’s much harder to not only investigate opposing ideas, but to make peace with them. 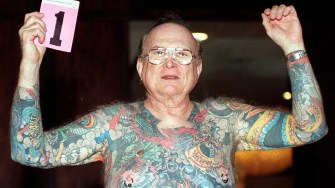 Larry Happ, 68, raises his arms to show his tattoos as he competes for the senior man largest tattoo during the Los Angeles Tattoo Convention. (Photo MATHILDE DE L’ECOTAIS/AFP/Getty Images)

Schulz offers three avenues for making peace with regret. First, take comfort in its universality. Unless you’re sociopathic (or have had a lobotomy), you’ll regret something, or many things. How you react to your reactions is indicative of your character. A life of remorse is not ideal.

Laughing at yourself is her second remedy. This is often easier in hindsight, though some have trouble even entertaining the idea. A Buddhist approach—the simultaneous development of humility and compassion—is warranted in this regard. Laughter softens us, removes any perfectionist stain we’ve built up over time.

Which leads to the third: time heals all wounds, even permanent ink etched on your skin. These errant tattoos become reminders of a previous moment when that decision did in fact make sense. You learn how to chart progress based on your marks rather than dwell in their persistence.

I have over 60 hours of tattoo work on my body, which leaves a lot of room for error. Yet I long ago decided to never regret any of them, even those small Chinese characters I added at age 18 in a questionable New Jersey establishment. While I have had one cover-up that ended up working out—due to a terrible job, not at the idea itself—I’ve yet to regret any tattoo decision thanks to a mental reframing.

Would I have chosen some differently? Perhaps. But that wouldn’t have represented who I was at the moment I walked into the parlor. Each piece represents a stage of my life. I’m not alone in this regard: Pen & Ink is dedicated to narratives people build around their ink.

Schulz’s larger point goes beyond the repetitive punches of a tattoo gun. It’s a reminder to feel pain, to open yourself up to being vulnerable and remind yourself it’s okay to make poor decisions so long as they help you mature along the way.

Research sheds light on social behavior of these mysterious predators.
Up Next
Technology & Innovation

10 Companies That Control Just about Everything You Eat

It might surprise you that the majority of items in American supermarkets are owned by about 10 companies.