While it’s long been suggested that religious believers consume more pornography (alongside engaging in other solicitous acts), it’s difficult to gather reliable data. Pornography is not a topic of general discussion, especially in America. Our Puritanical mindset runs so deep that white supremacists and Holocaust deniers maintain social media handles while you risk getting banned if you show a female nipple.

A team of researchers—Nicholas Borgogna and Ryan McDermott at the University of Southern Alabama and Anthony Isacco at Chatham University—wanted to better understand the relationship between religiosity and problematic pornography in heterosexual men. Their study, published in Sexual Addiction & Compulsivity, sheds light on the psychology of these religious individuals.

What is problematic pornography? One longstanding notion involves the “orgasm gap.” A 2014 study notes men climax in 85 percent of sexual encounters; women, 63 percent. As most pornography focuses on male pleasure, this psychology seems to translate into actual bedrooms.

There’s also disappointment. In 2017, I traveled to a pornography convention in Las Vegas to discuss the future of sex through the lens of virtual reality. Brian Shuster, founder of HoloGirlsVR, warned about the dangers of believing screens translate to real life. Speaking about teenage boys grappling with newfound sexuality, he says,

The team focused on three principles: scrupulosity, an obsessive-compulsive disorder centered on guilt or obsession around religious perfectionism; traditional masculine ideology; and self-compassion, or maintaining an “emotionally positive self-attitude.” Before reading responses, they hypothesized scrupulosity and masculine ideology would positively correlate to problematic pornography viewing (with the former providing a strong correlation) while volunteers with high self-compassion scores would not be ridden by guilt. 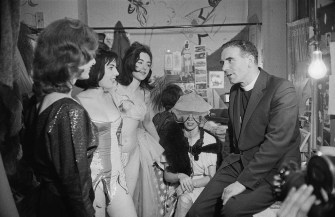 The reverend Vernon Mitchell talks to women at a strip club as part of a process to determine which segments of the show should be censored, London, 1st November 1960.Photo by Peter Dunne/Daily Express/Hulton Archive/Getty Images

They were partly right. Scrupulosity showed the highest correlation. Self-compassion did not negatively correlate, however. They guessed higher self-compassion, being the antithesis of the rigid, perfectionistic model of scrupulosity, would allow for self-forgiveness. “Unfortunately,” they conclude, “our data suggested the relationships to be non-significant.” Traditional masculine ideology did not correlate positively either.

Interestingly, Borgogna found general religiosity is not associated with viewing frequency. Being religious does not mean you view more pornography. Yet for a subset of religious believers there is increased distress. They believe religiosity could be a “protective factor” against viewing frequency for a certain segment of the religious population.

The team hopes therapists use this information as pornography addiction is an under-discussed topic in clinical settings. They advise mental health practitioners to focus on religious-based obsessive thoughts leading to scrupulosity, the constant impulse to access pornography, and cyclical feelings of guilt and shame.

They also note viewing frequency is not necessarily correlated to relationship or mental health problems. Even a little can trigger negative feelings and psychological distress in those suffering from scrupulosity, while many in the Bible Belt (and beyond) feel no shame, religious or not.

Tags
communicationmoralityrelationshipsSexsexual violenceSexuality
In this article
communicationmoralityrelationshipsSexsexual violenceSexuality
Related
The Future
How a device transmits radio waves with almost no power
Apart from the energy needed to flip the switch, no other energy is needed to transmit the information.
The Well
How to articulate your thoughts effectively
Make it simple. Make it clear. Make it stick. Alan Alda on how to get everyone to understand your thoughts.
▸
5 min
—
with
Alan Alda
Life
How artificial intelligence is helping us decode animal languages
Communication among cetaceans, like whales and dolphins, looks especially promising.
Neuropsych
About 1 in 100 people stutter. What causes it?
The majority of children who stutter will spontaneously recover from it without intervention, but some 20% of people do not.
Neuropsych
How do lie detectors work?
Experts explain how lie detectors work, what happens in the brain when we tell lies and how accurate polygraph tests are.
Up Next
The Present
The DMT ‘elves’ people meet while tripping
Why do so many people encounter these ‘elves’ after smoking large doses of DMT?