Over 8 percent of Americans will suffer from post traumatic stress disorder (PTSD) at some point in their lives, which is double the global average. Considering the current world population, that means roughly 308 million people will experience short-term or chronic PTSD from a variety of triggers: war, sexual assault, bullying — an entire list of invasive assaults. We’re simply not equipped to handle such cognitive and emotional overload.

Which is why treatments are so badly needed. Last year, the Multidisciplinary Association for Psychedelic Studies (MAPS) published a study in The Lancet Psychiatry showing a 68 percent efficacy rate in PTSD symptom reduction; patients in that trial no longer needed ongoing treatment. It was another step on a decades-long battle to remove MDMA from Schedule 1 by proving its therapeutic value.

Now a new study, this one published in Psychopharmacology on May 7, combines the research of six Phase 2 studies on MDMA in order to move the research onto Phase 3. The tortoise-like approach that MAPS has taken since its 1986 founding has been critically important in opening a dialogue about the value of psychedelics. Of course, governmental oversight of these substances has not exactly been progressive.

But there is forward movement. As Michael Pollan notes in his opus on this topic, How to Change Your Mind, given the lack of continual efficacy and troublesome side effects of current pharmacological treatments, governmental agencies are now taking a hands-off approach to substances like psilocybin and MDMA. In fact, research is being requested.

How MDMA and psychedelic drugs can assist mental health

How MDMA and psychedelic drugs can assist mental health

Fortunately, MAPS is happy to provide it. As study author Allison Feduccia, who began testing MDMA in rats in 2004, notes regarding her understanding of the substance,

“I… learned about the unique effects of MDMA and why it was used in couple’s therapy prior to being placed on Schedule 1 list. Using a drug only a few times to enhance therapeutic processing to resolve underlying issues that cause PTSD symptoms seemed like an approach worth investigating.”

MDMA increases the amount of serotonin, dopamine, and noradrenaline neurotransmitters in certain regions of the brain. Though ecstasy became victim to a bad public image in the ’90s for being associated with kids at raves not drinking enough water while dancing all evening, little attention was paid to dosage and environment. As with many mind-altering substances, fear mongering usurped a levelheaded, rigorous clinical approach to better understanding how these drugs can benefit us.

The six trials included in this study were conducted between 2004–2017. A total of 103 volunteers took part. Participants underwent two or three 90-minute psychotherapy sessions prior to ingesting MDMA to establish a baseline for their conditions. This was followed by two to three supervised MDMA (or placebo) sessions. Volunteers remained overnight; a 90-minute “integration” session followed.

In total, half of the volunteers no longer met the clinical criteria for PTSD after their MDMA sessions. This is compared to 23 percent in the placebo group. This remained true after a year of follow-ups, which is especially important given that many pharmaceutical treatments require daily usage to remain effective.

Researchers are not certain why substances in the serotonin-producing family “reboot” people’s psychological condition. One speculative idea is perspective. For example, LSD has shown efficacy in treating addiction issues. While on the psychedelic journey, a new worldview is introduced. When the subjects realize how their addictions destroy their bodies, they vow to change after the journey is over. Something about the realization coupled with neurochemistry makes the changes stick. 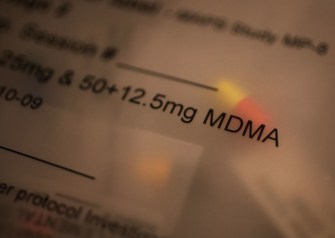 A dose of MDMA in the office of Dr. Michael Mithoefer, a psychiatrist, who has studied the use of MDMA as a treatment for PTSD in Mount Pleasant, SC, USA on August 24, 2017.

Photo by Travis Dove for The Washington Post via Getty Images

For some reason, psychedelics offer, at least in parts of the population, a “wake-up” powerful enough to reorient their relationship to reality. MDMA appears to have a similar function: experiencing the “bliss” associated with the substance, volunteers integrate the experience deeply enough to shift their outlook. The trauma of the past no longer holds as much power over them.

How this correlates on a neurochemical level remains to be seen. Yet as the study authors note, the efficacy of these Phase 2 trials is dependent upon MDMA and psychotherapy. Taking the substance but not being offered professional guidance might not prove as effective in long-term integration regardless of chemical interactions. As has long been espoused in the psychedelic community, set and setting are equally important factors in the experience; drugs alone will not do the trick.

Minor side effects were recorded during the sessions, including anxiety, dizziness, jaw clenching, nausea, and lack of appetite. Still, given the overwhelming and profound nature of the experience, the team notes that MDMA has “a low potential for abuse.” None of the volunteers reported craving more; a number of respondents said they did not find pleasure, and that it was “rather difficult therapeutic work delving into their traumatic memories.”

As Feduccia says of the research, the road ahead is long. But this is an important step in overturning decades of misinformation about substances like MDMA and their therapeutic potential. If Phase 3 trials hold up, an entirely new — and more importantly, sanctioned — line of treatment could open up.

“It has taken many decades to reach this point for MDMA drug development,” she says. “We are seeing a shift in public opinion as scientific evidence builds support for use of MDMA and psychedelics for treating mental health conditions. These are exciting times we live in, and could very well likely be on the cusp of a new paradigm for psychiatric medicine.”

Tags
cognitive scienceemotionshealthmental healthpsychologyptsd
In this article
cognitive scienceemotionshealthmental healthpsychologyptsd
Related
Health
What happens when regular porn watchers abstain for a week?
Researchers watched for signs of withdrawal — but didn’t find any.
Thinking
Why you should laugh at yourself, according to Seneca and Nietzsche
“It is more human to laugh at life than to lament it.”
Sponsored
4 misleading personal finance tips
Personal finance advice is often over-simplified and fails to consider economic research or people’s unique circumstances.
Thinking
Bonhoeffer’s “theory of stupidity”: We have more to fear from stupid people than evil ones
Evil is easy to identify and fight against; not so with stupidity.
Health
What decades of research tells us about living the good life
Warm relationships protect your mind and body from the slings and arrows of life.
Up Next
The Future
Hyperdimensional computing discovered to help AI robots create memories
New computing theory allows artificial intelligences to store memories.