What explains the stark differences in the life outcomes of psychopaths? Consider that one in five CEOs is a psychopath. That same rate also applies to prisoners. Of course, not all psychopaths are business leaders and criminals. But researchers have long struggled to explain why some psychopaths are relatively “successful,” and others engage in antisocial behavior that ruins lives.

Now, a new study — set to be published in the journal Personality Disorders: Theory, Research, and Treatment — aims to shed light on the factors that control psychopathic behavior.

“Psychopathic individuals are very prone to engaging in antisocial behaviors but what our findings suggest is that some may actually be better able to inhibit these impulses than others,” lead author Emily Lasko, a doctoral candidate in the Department of Psychology at Virginia Commonwealth University, told VCU News. “Although we don’t know exactly what precipitates this increase in conscientious impulse control over time, we do know that this does occur for individuals high in certain psychopathy traits who have been relatively more ‘successful’ than their peers.”

The study notes that psychopathy exists on a spectrum in society, and it can manifest through a variety of personality traits, such as interpersonal manipulation, impulsivity, callousness, grandiosity, and boldness. Some traits may help psychopaths become “successful,” defined as those who adapt to social norms and avoid incarceration.

The researchers hypothesized that psychopaths who are able develop impulse-control skills are more likely to be successful. The team suggested that successful psychopaths develop a mechanism that gives them greater control over their behavior, helping them thwart their heightened antisocial impulses.

Conscientiousness is the trait that predicts whether a psychopath will develop this mechanism, according to the study.

“The compensatory model posits that people higher in certain psychopathic traits (such as grandiosity and manipulation) are able to compensate for and overcome, to some extent, their antisocial impulses via increases in trait conscientiousness, specifically impulse control,” Lasko said. 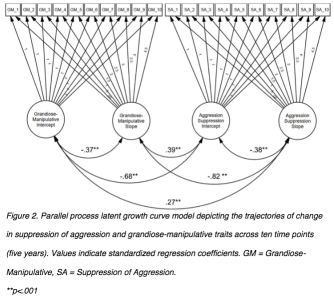 To test the hypothesis, the researchers examined data from a seven-year longitudinal study on adolescent criminals in Arizona and Pennsylvania.

“Although these participants are not objectively ‘successful,’ this was an ideal sample to test our hypotheses for two main reasons,” the researchers wrote. “First, adolescents are in a prime developmental phase for the improvement of impulse control. Allowing us the longitudinal variability we would need to test our compensatory model. Second, offenders are prone to antisocial acts, by definition, and their rates of recidivism provided a real-world index of ‘successful’ versus ‘unsuccessful’ psychopathy phenotypes.”

The study found that adolescents who scored high in grandiose-manipulative psychopathic traits early in the study were more likely to develop better impulse control and less aggression over time. Psychopaths who scored higher in impulsivity didn’t see as much of an increase.

The findings support the idea that psychopathy isn’t just about personality deficits, but rather a combination of heightened and diminished traits, some of which compensate for each other over time.

“Our findings support a novel model of psychopathy that we propose, which runs contradictory to the other existing models of psychopathy in that it focuses more on the strengths or ‘surpluses’ associated with psychopathy rather than just deficits,” she said. “Psychopathy is not a personality trait simply composed of deficits — there are many forms that it can take.”

The findings also suggest that the Big Five model of personality — of which conscientiousness is part — is an important tool for understanding psychopathy.

“Together, these results point to the consequential nature of the development of conscientious traits for psychopathic individuals, which may promote adaptive re-entry into society. Indeed, even ‘unsuccessful’ offenders in our sample exhibited associations between their grandiose-manipulative traits and greater impulse control (albeit to a substantially lesser degree).”

The use of AI within mental health services could be a game-changer.
Up Next
Hard Science

If you were awaiting screaming death from the skies, you can relax. For now.