Ask someone why they play video games, and they’ll likely say it’s a fun way to spend an evening. Watch that same person as they play, and you’ll doubt they possess an inkling of self-understanding.

Fully engaged, a player’s face doesn’t register mirth but the focused eyes and pursed lips of deep mental exertion. Losing one round may result in an exasperated sigh, but as the losses stack up, you can see the teeth-gnashing, controller-smashing scrublord begin to emerge. Push some people far enough, and the rage-quits are truly a sight to behold.

And players submit themselves to this for fun? As a way to chill out? Really?

Danish game designer Jesper Juul doesn’t think so. While enjoyment certainly plays a part, it is failure, not fun, Juul argues, that ultimately keeps players returning to the battle royale or going another round against a baleful boss. 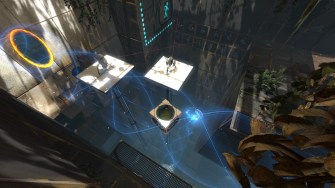 Before playing a game in the Portal series, we probably did not consider the possibility that we would have problems solving the warp-based spatial puzzles.

The paradox of failure

Failure feels awful, so people avoid it as often as they can. Even when we fail out of sight from others, our minds try to maintain our self-image by elaborating excuses for why the failure either wasn’t our fault or was completely unavoidable (i.e., motivated reasoning).

It’s interesting then that players seek out a pastime in which they are guaranteed to fail and willingly pay the price for that failure—whether it’s another quarter, lost time, or being forced to reassess one’s skills. In his short book The Art of Failure, Juul labels this phenomenon the paradox of failure, the clash between a player’s desire to avoid failure and their drive to seek it out.

When failing a game’s challenge, Juul notes, a player discovers a deficiency in their ability or approach. Although having little importance outside the game, these deficiencies, like all inadequacies, are unpleasant to discover. Ironically, a player is never required to explore these personal inadequacies as they relate to a skill set they would never need had they not pressed start:

Before playing a game in the Portal series, we probably did not consider the possibility that we would have problems solving the warp-based spatial puzzles that the game is based on—we had never seen such puzzles before! This is what games do: they promise us that we can repair a personal inadequacy that they produce in us in the first place.

The same goes for slaying dragons, commanding hordes of space marines, or discovering our princess is in another castle.

Have game players simply learned to not mind failure? Not at all. Many players engage in vocal motivational reasoning after choking the win, complaining about lag, controls, or hacks in blatant attempts to save face. And let’s not forget the aforementioned rage-quits.

Rather, failure is a key part of the experience. A survey performed by Juul found that players prefer games where they feel responsible for failure, not games in which success is guaranteed. In fact, many handicap themselves, either by selecting a higher difficulty or creating self-imposed rules, should a game’s challenge grow too stale. 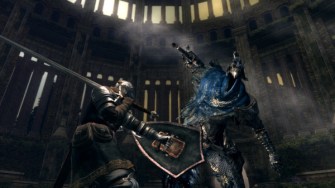 Dark Souls is the epitome of Juul’s failure-improvement cycle.

The psychology of failure

One reason players crave failure is that success without that possibility is tasteless. “Failure,” states Julie Muncy at Wired, “offers texture, complexity, and a chance for growth on the part of the player and character alike.” Games that can beat you are worth engaging with.

Imagine playing a game that only requires you to move a virtual avatar from one side of the screen to the other. “You win,” the game exclaims. A pointless victory, no?

Conversely, a game that does not offer the player a fair chance—either by presenting an insurmountable obstacle or by not informing the player of its internal rules—is considered broken. E.T. the Extraterrestrial for the Atari 2600 is disparaged as one of the worst games of all time, because it dropped players into the experience with no understanding of its goals, how to achieve them, or how to learn its mechanics (short of blind luck).

Between these extremes, Juul posits a psychological loop in which players engage fruitfully with failure. In this loop, a player is first introduced to a goal, fails at the goal to reveal an inadequacy, and then searches for a solution. The player tries various approaches until discovering the solution, at which point the cycle resets. Juul calls this the failure-improvement cycle.

“Failure in games tells us that we are flawed and deficient,” Juul writes. “As such, video games are the art of failure, the singular art form that sets us up for failure and allows us to experience and experiment with failure.” [Emphasis original]

A good example of the failure-improvement cycle is Dark Souls, a game that garnered a cult following for providing players many, many opportunities to fail. (The game’s tagline is “Prepare to die.”) Here’s Mark Serrels of Kotaku describing his victory over the game’s most notoriously difficult sections, Ornstein and Smough:

The most common reaction, for me at least, is the calm, zen-like focus of understanding. You’ve fought this boss many times. You are now aware of his/her/its patterns and you know how to react to each one. You are currently in the zone. You are having the dream run of dream runs and you feel utterly invincible. [Emphasis original]

Notice Serrels’ and Juul’s emphasis on the concept of understanding. The point of improving at Ornstein and Smough is not that Dark Souls teaches hard skills to be used in some profession. The point is simply to prove that improvement is possible. Success in a game is fun, true, but more importantly it shows us that failure can be overcome.

“This basic trick of learning and improvement is that we have to accept the painful answer (this is my fault, and a failure of me [not] being who I want to be) in order to be motivated to become who we want to be,” Juul writes. “This is how each moment-to-moment attempt to avoid failure has existential significance for us.” 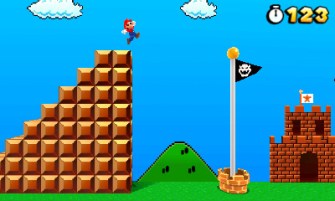 With video games, children can see measurable improvement in real time and learn that skills, knowledge, and abilities are not fixed but open to growth.

(Photo from Nintendo of America)

The mindset of failure

By embracing the failure-improvement cycle, we may be able to extract real-world advantages from the paradox of failure. As Juul notes, a well-designed video game provides us with clear goals, a fair chance at success, and rewards us for achieving, such as a triumphant tune for winning a battle or revealing more of the narrative. The real world, in contrast, makes no such promises. Goals can be opaque, success perpetually out of reach, and rewards ill-defined.

Still, we need to engage with the real world in productive ways, and through games we can help develop growth mindsets within ourselves. Children in particular can see their improvement in real time and may be taught to understand that skills, knowledge, and abilities are not fixed but open to growth.

A study by Dr. Kurt Squire, former director of Games, Learning and Society Initiative at the University of Wisconsin-Madison, found that video games may be able to counter the sense of “learned helplessness” among students.

“In my study, failure was not only a ‘problem’ but also a critical precondition for learning. Failure forced students to confront gaps or flaws in their current understandings through cycles of recursive play,” Dr. Squire writes. [Emphasis original.]

This is why people play video games to fail: because they provide us a safe space with which to experiment with failure. And learning how to fail is a necessary step in learning to succeed.

There is no long-term beneficial effect of medication on standardized test scores.
Up Next
Health

More and more research points to a serious mistake we made in how biomechanics works.