Should we really be surprised by a study entitled, “Perfectionism Is Increasing Over Time?” Though written in 2017, this research from Thomas Curran and Andrew P. Hill was recently republished by the American Psychological Association. Though previous surveys have mentioned “authenticity” as a defining feature of the target age group—millennials—it’s hard to imagine an absence of mimicry given our social media environment.

This research is unique in approach. The team opens with a discussion of neoliberal governance being responsible for creating the conditions for rampant individualism to spread. An unchecked free market is placing undue stress on younger generations, forcing them to battle for screen space on a regular basis. Sleep becomes impossible when the entire planet is your schoolyard.

While the correlates and consequences of perfectionism are well-documented, the authors believe less research exists on the cultural conditions that fertilize it. Most research deals with parental and immediate environmental influences, not the governing economic and cultural forces. They consider perfectionism “a cultural phenomenon,” and treat it as such.

“In its broadest sense, then, perfectionism can be understood to develop through the messages that young people internalize from their immediate social environments, the resulting view of themselves, especially how they construe self-worth and how it is established, and their sense of self in relation to others.”

While this line of thought might be new to studies on perfectionism, differences between communal and individualist societies are understood. Better or worse is not the point of this work. Pressures associated with first thinking of yourself instead of your group have grave consequences on your mental health. Rates of anxiety, depression, and suicide are all increasing in this younger cohort.

The Problem With Perfectionism

The Problem With Perfectionism

The authors define perfectionism as “excessively high personal standards and overly critical self-evaluations.” They employ a cross-temporal meta-analysis of American, Canadian, and British college students’ replies to the Multidimensional Perfectionism Scale. Totaling 41,641 students between 1989 and 2016, three types of perfectionism were considered:

Self-oriented perfectionism is considered the most complex. They base self-worth on achievements. Satisfaction never comes. Over the long run, clinical depression, eating disorders, and early death are a few of the results.

Socially prescribed perfectionism is the most debilitating, resulting in major bouts of anxiety and depression; it can lead to suicide when unchecked.

Other-oriented perfectionism is the least studied. Recent research ties it to higher levels of vindictiveness, hostility, and a tendency to blame others for, well, everything, but mostly for personal shortcomings. Low levels of altruism, compliance, and trust follow, as well as, in relationships, more fighting and less sexual satisfaction.

In a neoliberal environment, levels of narcissism, extraversion, and self-confidence increase as communal traits spiral. Collectively, we’ve become less caring about the welfare of others, while blaming others has gone through the roof. Ironically, we didn’t need a study for this. We only need Twitter.

These trends are apparent in influencer culture, where a premium is placed on experiences, many of which are fabricated to begin with. This glorification of experience is why recent generations spend more money on status possessions and image goods well above their parents and grandparents. Add a dash of FOMO for a toxic cocktail. 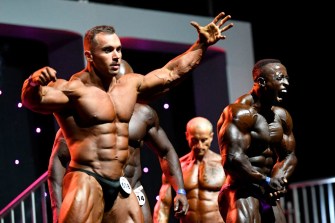 Worldwide Professional Bodybuilders during the Arnold Sports Festival Africa 2019 at Sandton Convention Centre on May 18, 2019 in Johannesburg, South Africa.

As we’ve known since biblical times (and likely before), more stuff equals less satisfaction. Our impatience with stuff translates into dissatisfaction with self. Cortisol boils.

“Yet rather than alleviate presentational and interpersonal anxieties, studies indicate that exposure to others’ perfect self-representations within social media can intensify one’s own body image concerns and sense of social alienation.”

One real-world example: The UK has experienced a 30 percent increase in body dysmorphia and eating disorders in young girls since the advent of social media.

In a meritocracy, those with the highest status and most possessions are treated as winners, though little information about their prior conditions is shared. We only see the lifestyle, not the trust fund; we don’t know what clothing gets shipped back to the rack. A pompous display: those with less feel less deserving. Material wealth is too often linked with low self-esteem.

Not only is the schoolyard infected, but so is the classroom. Teens are being taught that an education is designed to make money, not to enrich their lives and deepen their knowledge. American society no longer rewards the culture it created—wage premiums associated with degrees have stagnated for the last 20 years—yet we’re left with the mental weight of school as a means of financial success, or, as it goes, “getting ahead.”

This translates into parents—part of the neoliberal, meritocratic groundswell—transferring their own failed expectations onto the shoulders of their children. The youth internalize these pressures. Parents spend far more time today than a few decades ago focusing on educational endeavors and far less time on leisure and hobbies.

“Should a young person be unable to navigate an increasingly competitive social milieu, then it is not just their failure, it is also the parents’ failure too.”

Interestingly, American students showed higher levels of self-oriented perfectionism and lower levels of socially prescribed perfectionism. This is, in part, due to shrinking budgets for communal-oriented funding faster than other countries. Regardless of geography, all three cohorts claim to be victims of demanding social expectations.

The kids are not alright. Neither are the parents.

It’s always been nature and nurture. While parental influences are powerful, this research shows how forceful the weight of society is on our outlook. Just as anti-Semitism is rising in a populist-focused America, the endless barrage of people (seemingly) having more fun and stuff than you is taking its toll. The screen is a mirror of failed expectations and we’re all paying the price.

“In our studies, people who are more intelligent don’t mind wander so often when the task is hard but can do it more when tasks are easy.”
Up Next
The Present

A 2019 ranking of all 50 states’ education systems shows the Sunshine State serves its college students well.