It seems as if we’ve reached another milestone in our continual march forward towards human machine symbiosis. Recently, a 29-year-old man from Wisconsin, Jered Chinnock, who’d been paralyzed below the waist for four years was able to briefly walk again thanks to an exciting new surgery.

Jered slowly regained his ability to stand and walk through spinal cord stimulation combined with months of physical therapy. The aftermath of the harrowing accident initially left Jered with no hope. But thanks to some advances in neuroscience and a study he was part of since 2016, he was able to walk at one point over 100 yards – the length of an American football field!

Chinnock had an electrode implanted into his spine by a neurosurgery team led by Dr. Kendall Lee, the director of Mayo Clinic’s Neural Engineering Laboratories. Once the stimulator was turned on, Jered was able to slightly move his legs.

One hundred and thirteen rehabilitation visits later, Chinnock dazzled researchers with feats such as: a combined 16 minutes of walking, 111 yards walked and a step speed of 13 yards a minute. These things have never been seen before with a patient who’s been diagnosed with complete paraplegia.

This electronic-spinal control connection is taking scientists into a thrilling and new space. 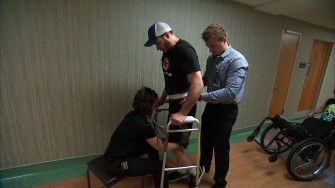 The electrode implant was surgically inserted into the outermost part of the spinal canal and, in this case, right underneath the injured area. It connects to a pulse generator device which was installed below the skin of Chinnock’s abdomen. The battery in the abdomen was connected by a wire to the electrode, which was also laid underneath his skin. The two pieces communicate wirelessly with an outside controller.

This new electrode mechanism working successfully is a big deal, because there’s no need for a physically intrusive brain surgery in order to change the function of the limbs. In a sense it’s all happening through thoughts alone.

Dr. Lee stated that, “The reason why this is important is because the patient’s own mind, thought, was able to drive movement in his legs. Just as important is that we were able to get him to stand independently and take his own steps.”

Although he was able to walk at length during these sessions, there were some caveats to the experiment. Once the remote controlled electrode was turned off, he’d become paralyzed again. He also did not have renewed sensation in his legs.

This innovative surgery was published in a recent issue of Nature Medicine. This could be just the beginning for utilizing this new electrode mechanism inside the body. Doctors are ecstatic about this medical breakthrough, but there’s still a lot that they don’t understand about how an electrical stimulation was able take a severed spinal cord and restore movement.

“Now I think the real challenge starts, and that’s understanding how this happened, why it happened, and which patients will respond,” said Dr. Kristin Zhao, a co-principal investigator.

In the closing notes of the paper, the authors confidently state:

We have demonstrated that human spinal networks can be transformed years after SCI to reach physiologic states that generate coordinated and robust spinal motor outputs to generate independent stepping and standing.

These results support the concept that these types of rehabilitation efforts can be used in the future to help brave paralyzed people, such as Chinnock, regain their ability to walk and function again.

Quantum mechanics + consciousness: There is nothing better than mixing two great mysteries to produce an even bigger one.
Health

The cause of Alzheimer’s is still not fully understood, but we might be able to vaccinate against it anyway.
Neuropsych

Scientists want to use dream hacking devices to improve your creativity and memory.
Neuropsych

Research shows that psilocybin leads people away from materialism and toward transcendentalism. Apparently, mushrooms teach metaphysics.
Up Next
Health

Will hospital food ever get better?

New York–area chefs are working on the problem. More need to follow their lead.