Liane Young is an associate professor of psychology at Boston College, where she is the director of the Morality Lab, which specializes in moral psychology. Dr. Young's current research focuses[…]
Go to Profile
In Partnership With
John Templeton Foundation 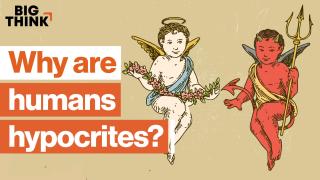 As morally sturdy as we may feel, it turns out that humans are natural hypocrites when it comes to passing moral judgment.
▸
5 min
—
with
Liane Young

LIANE YOUNG: What makes morality unique is that a lot of times people experience a moral judgment as a flash of intuition or feeling, good or bad. But underneath that feeling is complex moral psychological structure.

NARRATOR: We think that our morals are steadfast, as if they were set in stone or inscribed in ink, but it turns out our morals are far more fluid than we'd like to believe.

YOUNG: Studying moral psychology allows us access to other's perspectives, that others could have different values. And so just knowing that there is this complex space of moral psychology could help us to understand where other people are coming from.

I'm Liane Young. I'm a psychology professor at Boston College. And in my lab, we study human moral decision-making. A key question in our lab right now is what the role of reasoning is for moral psychology. So, when do people and how do people think about different principles for making moral decisions?

NARRATOR: Morality might seem like a compass needle, always guiding us north. But as we start to add information and context that trigger biases, the needle begins to spin.

YOUNG: Moral cognition depends hugely on context. So, if I tell you about somebody who helped a stranger, you would say, they're much better than the person who helped their brother. But if I told you about a person who helped the stranger instead of the brother, you wouldn't think they're very good at all. And it turned out through the research that we did, it was really people's intuitions about familial obligation that structured people's moral intuitions across all of these different cases.

NARRATOR: We may say adultery is wrong, but if it's a friend who we know well, who had a troubled marriage, maybe we're more forgiving. We say stealing is wrong, but we might be more understanding of our favorite politician when they're caught lining their pockets. We do this all the time.

YOUNG: The point is that there are lots of different contextual influences that contribute to people's moral judgments.

NARRATOR: Morality has evolved with our species because of human's practical and psychological need for social bonds, but even early human societies began codifying morality into laws and norms that were meant to be applied universally.

YOUNG: Back in evolutionary time, people didn't interact with others across the world. We interacted with the people in our family, the people that we could see. It's because of that, moral psychology has developed these sorts of biases that have to do with social distance. So, we think that the harm that is being done up close and personal, right in front of us matters more than the harm that is being done to somebody across an ocean.

NARRATOR: So, it shouldn't surprise us that the biases our minds exhibit are pragmatic. The moral judgments we make about our close associates are more forgiving and nuanced than the judgments we make of strangers.

YOUNG: The evolutionary origin of morality is coordination or cooperation; to help people get onto the same page by pointing to common normative principles that we can use to negotiate relationships, to organize interactions across many different social contexts.

NARRATOR: When we examine the moral judgments of others, it's tempting to think that we live in different worlds, but there's only one.

The challenge today is that our social contexts are far more global and complicated. So, can our sense of tribal morality evolve to encompass people outside of our tribe?

YOUNG: And so I think learning about the psychology that drives that experience for individuals, thinking about what to do and also individuals thinking about how to evaluate others is going to be a really important process for negotiating complex social interactions. I think that clarifying the value that you are consulting for a particular problem is really critical.

NARRATOR: We are all connected in some way. Between any two people in the world, there's some common value or experience. Finding that commonality could be the best path towards a more morally consistent world.