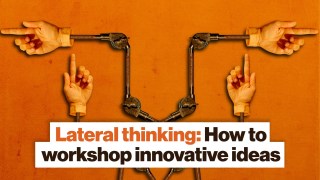 Don't underestimate the power of play when it comes to problem-solving.
▸
7 min
—
with
Dan Seewald

DAN SEEWALD: As we get older, it becomes a real benefit to have a long history and tradition, the work that you do. It builds what you might call patterns or rivers of thinking. And the more experience we glean, the more education we acquire. We build deeper and deeper rivers. And those rivers are really valuable. Those patterns are important.

But the challenge is that as those patterns get deeper, we get locked into them. And it becomes hard to change our minds. It becomes hard to do things differently. That's why children are absolutely amazing at their lateral thinking, or the ability to think across different domains within an instant. It's because they haven't built those patterns or gone deep into those rivers yet.

And while a river can be really valuable for you as an expert in an area of neuroscience, let's say, or it can be really useful if you're building a product forecast or doing market research, when you need new ideas, when you need to break with the past, it could be really challenging. Because we know what we know, and it's hard for us to diverge or jump out of those rivers.

Think about it this way for a moment. How many times have you gone to work the same exact way, walking across the same city blocks or driving across the same roads? When have you said to yourself, I'm going to go a longer route, I'm going to try something different? Maybe I'll even bike to work. Maybe I could skateboard-- maybe not skateboard. But you know what I mean, doing things differently. Because when you do things differently, it actually starts to rewire our brain, and it pushes us in a very deliberate way to think what we've never thought before.

And there's a lot of different lessons and little secret ingredients that I think that could help prime or set people up to be able to think different. So one, the battle is usually one or lost before you ever step foot on the battlefield. I think it was George Patton who said that. And it really is true, not just in war or in sports, but in innovation.

The reason I say that is that it primes you. It gets you ready. You've already premeditated on the subject. And while that might put you in a pattern of thinking, it also readies you to come in and to start thinking deeply on a subject. Often, we'll throw out things in the moment, in the instant, to people and hope that miraculously, they'll have a great idea. It requires incubation time, which is a term that's used in neuroscience, where we allow for ideas to percolate before we actually start to try to do something with it. So preparation is absolutely essential when you want to achieve a big success in any type of workshop or design sprint or ideation session.

The second thing that I believe wholeheartedly in is this idea of play. So play is not something new, but it's often frowned upon in most of adult working states. Now, some companies have done an awesome job of trying to change the story, Google, and Apple, and other companies that are a bit more tilted towards the millennials. But us older folk also really like to play. When we were kids, we were all awesome at play. It's something that we did every day.

And I like to bring play and game mechanics back into workshops. Why is that? Because we can simulate what we're going to do through play, in game. And then, after we've done it with no risk, no fear of failure, then we can actually have people do it on serious subjects. But we've built patterns. We've built a pathway in which people have now played, and they've gone through the steps. And now they're ready to do real and serious work with a little bit more of a playful mindset.

And you know what's most important about the play, about play and also about game mechanics? It's that it puts us into a different mindset. From a neuroscientific standpoint, we are not in the busy perturbations, the ups and downs instantly, in which we are thinking in a transactional mindset, when you're trying to make a quick decision, or you're in the office, and you've got to get through a project. It's the more relaxed and loose waves. Those more relaxed and loose brainwaves allow for longer thinking, slow thinking, as Daniel Kahneman, a famous economist, had described it. And we need slow thinking as much as we do fast thinking. Game mechanics are a great way to do it.

The last I'll just throw in-- there's many, many other things that I would hint at. But one that I really love is about going to the outside. If you want to fine art work, don't go to a gallery. Go to a junk yard. Go to a classroom with children. Why is that? Because innovation and bright ideas often can be found in the different domains that we don't usually go hunting in. We need to find different hunting grounds or different places to search. So go somewhere unexpected.

Borrow people from unexpected domains. Bring in children. Bring in a teacher. Bring in an ethnography. Bring in somebody who does salvage work, who may have an insight that could apply differently to your problem. When you bring in different people and different solutions from outside worlds, that's what accelerates problem-solving.

And this is nothing new. This concept has been around for nearly 60 plus years. The Soviet cosmonauts had used it. It was used in the Russian science, something called TRIZ. And the TRIZ-nics were out there and would borrow scientific solutions from all different domains. They would reapply them to new problems, and then they would see how that might actually enlighten or open our eyes to solutions that we wouldn't have normally encountered, by using that approach. So it's nothing new, but it's really powerful. So those are a few things that you can apply to be able to make your workshop or your solutions completely different than what you would normally do in a workshop.