From Netflix documentaries about notorious serial killers to dramatized TV shows with murders who have a certain charismatic appeal, many of us have some kind of fascination with true crime stories. Even beyond television, true crime books and podcasts are extremely popular. In fact, the “Wine and Crime” podcast gets around 500,000 downloads per month, with around 85 percent of those people being female.

Why do we love true crime stories? 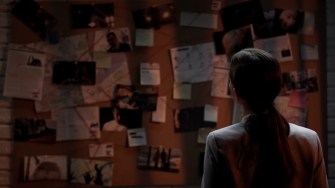 Several experts and psychologists weigh in on why we could be so fascinated by violence, destruction and true crime stories…Photo by Motortion Films on Shutterstock

Several experts have weighed in on this topic over the years, as the spike in popularity of true crime media has continued at an astonishing rate.

One of the defining qualities of a psychopath is that they have “superficial charm and glibness”, which could explain part of our fascination with podcasts, TV shows, and movies that cover the lives of famous serial killers like Ted Bundy.

Our psychology demands we pay attention to things that could harm us.

Psychology can play a large role in why we like what we like, and our fascination with true crime stories is no exception. When it comes to potential threats or things that could be threatening to humanity, perhaps we’ve been conditioned to pay those things extra attention.

According to Dr. John Mayer, a clinical psychologist at Doctor on Demand who spoke about the process in an interview with NBC News, seeing destruction, disaster, or tragedy actually triggers survival instincts in us.

“A disaster enters into our awareness – this can be from a live source such as driving by a traffic accident or from watching a news report about a hurricane, a plane crash or any disaster,” Mayer said. “This data from our perceptual system then stimulates the amygdala (the part of the brain responsible for emotions, survival tactics and memory). The amygdala then sends signals to the regions of the frontal cortex that are involved in analyzing and interpreting data. Next, the brain evaluates whether this data (awareness of the disaster) is a threat to you, thus judgment gets involved. As a result, the ‘fight or flight’ response is evoked.”

Could it just be morbid curiosity?

Dr. Katherine Ramsland, Ph.D., a professor at De Sales University, explained in an interview with Bustle:

“Part of our love of true crime is based on something very natural: curiosity. People reading or watching a true crime story are engaged on several levels. They are curious about who would do this, they want to know the psychology of the bad guy, girl, or team. They want to know something about the abhorrent mind. They also love the puzzle – figuring out how it was done.”

Perhaps it’s a way of facing our fears and planning our own reactions without risking immediate harm.

In an interview with NBC News, psychiatrist Dr. David Henderson suggested that we may be fascinated with violence, destruction, or crime as a way of assessing how we would handle ourselves if put into that situation:

“Witnessing violence and destruction, whether it is in a novel, a movie, on TV or a real life scene playing out in front of us in real time, gives us the opportunity to confront our fears of death, pain, despair, degradation and annihilation while still feeling some level of safety. This sensation is sometimes experienced when we stand at the edge of the Grand Canyon or look through the glass at a ferocious lion at the zoo. We watch because we are allowed to ask ourselves ultimate questions with an intensity of emotion that is uncoupled from the true reality of the disaster: ‘If I was in that situation, what would I do? How would I respond? Would I be the hero or the villain? Could I endure the pain? Would I have the strength to recover?’ We play out the different scenarios in our head because it helps us to reconcile that which is uncontrollable with our need to remain in control.”

A 2008 study published by the American Psychological Association found that humans react to and learn more from negative experiences than we do positive ones. The term “negative bias” is the tendency to automatically give more attention (and meaning) to negative events and information more than positive events or information.

A forced perspective may trigger empathy and act as a coping mechanism.

Viewing destruction (or listening to/watching true crime stories) could be beneficial. According to Dr. Mayer, “the healthy mechanism of watching disasters is that it is a coping mechanism. We can become incubated emotionally by watching disasters and this helps us cope with hardships in our lives…” Dr. Stephen Rosenburg points out, however, that this empathetic response can also have a negative impact. “Being human and having empathy can make us feel worried or depressed.”

Dr. Rosenberg goes on to explain that this can also impact the negativity bias. “We tend to think negatively to protect ourselves from the reality. If it turns out better, we’re relieved. If it turns out worse, we’re prepared.”

Perhaps the adrenaline of fear that comes from listening to or watching true crime can become addicting.

Similarly to how people get a “runners high” from exercise or feel depressed when they have missed a scheduled run, the adrenaline that pumps during our consumption of true crime stories can become addictive. According to sociology and criminology professor Scott Bonn, in an interview with Psychology Today: “The public is drawn to these stories because they trigger the most basic and powerful emotion in us all: fear.”

Tags
braincuriositydepressionemotionsfearmindpsychologyviolence
In this article
braincuriositydepressionemotionsfearmindpsychologyviolence
Related
Neuropsych
Psychology studies that go viral are likelier to be bogus
A new 20-year analysis of over 14,000 psychology studies finds that a study’s media coverage is negatively linked to its replicability.
The Learning Curve
Why do high IQ people stagnate in their careers? Emotional intelligence
Research suggests that emotional intelligence is more vital for success than IQ.
How to live after your soulmate has died
Astronomer Michelle Thaller explains the healing power of physics after losing her husband.
▸
7 min
—
with
Michelle Thaller
The Future
Space travel will radically change human psychology and spirituality
We are traveling in a realm that once exclusively belonged to the gods. Space travel will force humanity to rethink everything.
Neuropsych
Memory and the benefits of forgetting
Forgetfulness isn’t always a “glitch” in our memories; it can be a tool to help us make sense of the present and plan for the future.
Up Next
The Present
Churches received up to $10 billion in stimulus funding. They want more.
Apparently the Catholic Church is a small business.