This article was first published on Big Think in October 2018. It was updated in December 2022.

I love books. If I go to the bookstore to check a price, I walk out with three books I probably didn’t know existed beforehand. I buy second-hand books by the bagful at the Friends of the Library sale, while explaining to my wife that it’s for a good cause. Even the smell of books grips me, that faint aroma of earthy vanilla that wafts up at you when you flip a page.

The problem is that my book-buying habit outpaces my ability to read them. This leads to FOMO and occasional pangs of guilt over the unread volumes spilling across my shelves. Sound familiar?

But it’s possible this guilt is entirely misplaced. According to statistician Nassim Nicholas Taleb, these unread volumes represent what he calls an “antilibrary,” and he believes our antilibraries aren’t signs of intellectual failings. Quite the opposite. 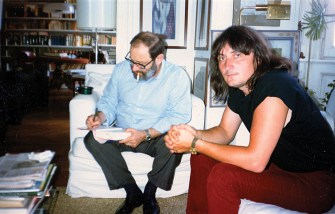 Umberto Eco signs a book. You can see a portion of the author’s vast antilibrary in the background.

Taleb laid out the concept of the antilibrary in his best-selling bookThe Black Swan: The Impact of the Highly Improbable. He starts with a discussion of the prolific author and scholar Umberto Eco, whose personal library housed a staggering 30,000 books.

Eco stated as much. Doing a back-of-the-envelope calculation, he found he could only read about 25,200 books if he read one book a day, every day, between the ages of ten and eighty. A “trifle,” he laments, compared to the million books available at any good library.

Read books are far less valuable than unread ones. [Your] library should contain as much of what you do not know as your financial means, mortgage rates, and the currently tight real-estate market allows you to put there. You will accumulate more knowledge and more books as you grow older, and the growing number of unread books on the shelves will look at you menacingly. Indeed, the more you know, the larger the rows of unread books. Let us call this collection of unread books an antilibrary. [Emphasis original]

The antilibrary’s value stems from how it challenges our self-estimation by providing a constant, niggling reminder of all we don’t know. The titles lining my own home remind me that I know little to nothing about cryptography, the evolution of feathers, Italian folklore, illicit drug use in the Third Reich, and whatever entomophagy is. (Don’t spoil it; I want to be surprised.)

“We tend to treat our knowledge as personal property to be protected and defended,” Taleb writes. “It is an ornament that allows us to rise in the pecking order. So this tendency to offend Eco’s library sensibility by focusing on the known is a human bias that extends to our mental operations.”

These shelves of unexplored ideas propel us to continue reading, continue learning, and never be comfortable that we know enough. Jessica Stillman calls this realization intellectual humility.

People who lack this intellectual humility — those without a yearning to acquire new books or visit their local library — may enjoy a sense of pride at having conquered their personal collection, but such a library provides all the use of a wall-mounted trophy. It becomes an “ego-booting appendage” for decoration alone. Not a living, growing resource we can learn from until we are 80 — and, if we are lucky, a few years beyond. 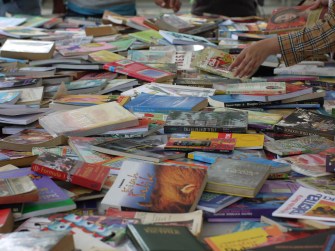 Book swap attendees will no doubt find their antilibrary/tsundoku grow.

I love Taleb’s concept, but I must admit I find the label “antilibrary” a bit lacking. For me, it sounds like a plot device in a knockoff Dan Brown novel — “Quick! We have to stop the Illuminati before they use the antilibrary to erase all the books in existence.”

Writing for the New York Times, Kevin Mims also doesn’t care for Taleb’s label. Thankfully, his objection is a bit more practical: “I don’t really like Taleb’s term ‘antilibrary.’ A library is a collection of books, many of which remain unread for long periods of time. I don’t see how that differs from an antilibrary.”

His preferred label is a loanword from Japan: tsundoku. Tsundoku is the Japanese word for the stack(s) of books you’ve purchased but haven’t read. Its morphology combines tsunde-oku (letting things pile up) and dokusho (reading books).

The word originated in the late 19th century as a satirical jab at teachers who owned books but didn’t read them. While that is opposite of Taleb’s point, today the word carries no stigma in Japanese culture. It’s also differs from bibliomania, which is the obsessive collecting of books for the sake of the collection, not their eventual reading.

The value of tsundoku

Granted, I’m sure there is some braggadocious bibliomaniac out there who owns a collection comparable to a small national library, yet rarely cracks a cover. Even so, studies have shown that book ownership and reading typically go hand in hand to great effect.

One such study found that children who grew up in homes with between 80 and 350 books showed improved literacy, numeracy, and information communication technology skills as adults. Exposure to books, the researchers suggested, boosts these cognitive abilities by making reading a part of life’s routines and practices.

Many other studies have shown reading habits relay a bevy of benefits. They suggest reading can reduce stress, satisfy social connection needs, bolster social skills and empathy, and boost certain cognitive skills. And that’s just fiction! Reading nonfiction is correlated with success and high achievement, helps us better understand ourselves and the world, and gives you the edge come trivia night.

In her article, Jessica Stillman ponders whether the antilibrary acts as a counter to the Dunning-Kruger effect, a cognitive bias that leads ignorant people to assume their knowledge or abilities are more proficient than they truly are. Since people are not prone to enjoying reminders of their ignorance, their unread books push them toward, if not mastery, then at least a ever-expanding understanding of competence.

“All those books you haven’t read are indeed a sign of your ignorance. But if you know how ignorant you are, you’re way ahead of the vast majority of other people,” Stillman writes.

Whether you prefer the term antilibrary, tsundoku, or something else entirely, the value of an unread book is its power to get you to read it.

Tags
bookslifelong learningpsychology
In this article
bookslifelong learningpsychology
Related
Neuropsych
Psychology studies that go viral are likelier to be bogus
A new 20-year analysis of over 14,000 psychology studies finds that a study’s media coverage is negatively linked to its replicability.
The Present
Radical idea: Redraw the U.S. map as a nation of city-states
While cities drive national economic growth, their political geography means they cannot effectively deal with inequality, poverty, and other socioeconomic problems.
The Learning Curve
Why do high IQ people stagnate in their careers? Emotional intelligence
Research suggests that emotional intelligence is more vital for success than IQ.
How to live after your soulmate has died
Astronomer Michelle Thaller explains the healing power of physics after losing her husband.
▸
7 min
—
with
Michelle Thaller
The Future
Space travel will radically change human psychology and spirituality
We are traveling in a realm that once exclusively belonged to the gods. Space travel will force humanity to rethink everything.
Up Next
Leadership
What causes burnout, and how to prevent it
The concept of burnout is nothing new. But there are ways to prevent burnout and promote greater engagement with work.