You’re preparing for an important meeting, and the pressure’s on. If it’s bad now, how will you cope when you actually have to perform? Will you fly? Or will you sink?

Psychologists have a lot to say about how to cope under pressure… both the chronic kind, which might involve ongoing high expectations at work, for example; and the acute, single-event variety such as a vital meeting, a make-or-break presentation, or a sports match.

A concept that’s increasingly recognised as important in relation to pressure is your “stress mindset”. If you recognise that stressful challenges can sharpen your focus, strengthen your motivation, and offer learning and achievement opportunities, then you have a “positive” stress mindset. In contrast, viewing stress as unpleasant, debilitating and negative constitutes a “negative” stress mindset. And there’s evidence that this is harmful. A 2017 study led by Anne Casper found that when faced with a day that they know is going to be challenging, people with a positive stress mindset come up with coping strategies, boost their performance, and end the day feeling more energised. For people with a negative stress mindset, the opposite happens.

Alia Crum at Stanford University is one of the best-known advocates of the positive stress mindset. She’s found that it’s not just adults who benefit. In a study of adolescents, Crum and her colleagues found that those who believed in the potential benefits of stress were less prone to feeling stressed in the wake of difficult life events. “These findings suggest that changing the way adolescents think about stress may help protect them from acting impulsively when confronted with adversity,” the researchers concluded.

If you do have a negative stress mindset, there are ways to turn it around. In another study, Crum’s team found that adult participants who’d watched a film clip that focused on the “enhancing” nature of stress, and were then put into a stressful social situation, afterwards felt more positive and showed greater cognitive flexibility than participants who’d first watched a “stress is bad” clip.

If you’re feeling anxious because you’re under increased pressure at work, or there’s a particularly challenging opportunity/stressful event (you now know which adjective you should pick…) coming up, one short-term fix might be to go and watch a horror movie. Deliberately scaring ourselves can calm the brain, leading to a “recalibration of our emotions,” according to a US study led by Margee Kerr which involved visitors to an immersive theatre attraction at the ScareHouse in Pittsburgh. Those volunteers who were more stressed or tired beforehand showed the biggest emotional benefits afterwards.

There is also some tentative evidence from Heidi Fritz and others that taking a cheerful perspective on life is associated with less stress over time, while self-defeating humour — the sort that involves disparaging yourself — is associated with more distress.

The evidence from this particular study is not strong. But some support for the idea that trying to big yourself up, rather than to put yourself down, can help in high pressure situations comes from a study in which Sonia Kang at the University of Toronto and her team studied a group of MBA students. The researchers put some into positions of low power in a negotiating situation, and found that these participants performed worse under pressure than those who’d been given more power over the outcome. However, when “low power” students first spent five minutes writing about their most important negotiating skill, this neutralised the power differential effect on performance. “Anytime you have low expectations for performance, you tend to sink down and meet those low expectations,” Kang observed. “Self-affirmation is a way to neutralize that threat.”

However, if you are going into a negotiating situation, you may also want to bear this in mind: when put under time pressure, people tend to act more like themselves, according to a recent paper in Nature Communications. Researchers Fandong Chen and Ian Krajbich, based in China and the US, found that when there was little time available to make a decision about how to divide a pot of money, selfish people tended to act more selfishly than usual, while pro-social people behaved even more pro-socially. In theory, either could be useful — depending on what you want out of an interaction.

However, time pressure can also improve decision-making, according to a simulation of a realistic disaster event overseen by Liverpool’s Centre for Critical and Major Incident Psychology. It’s thought that this is because it forces people to make tough decisions — and when these people are experts, they’re more likely to be the right ones. 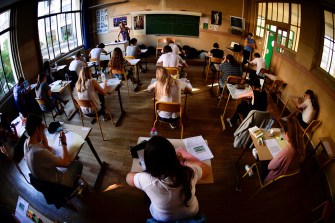 Whether you’re a hospital manager awaiting an influx of injured patients, or a lecturer or a student about to go into a vital meeting or exam, you’re likely approaching the point of maximum pressure. What can help?

You might hope for a text message from a friend or romantic partner. Recent research from Emily Hooker and colleagues confirms that sending a text to a partner confronted with a difficult task really can make them feel more supported. This particular study involved 75 women who were asked to do a set of stressful tasks, including mental maths and public speaking, while their blood pressure and heart rate were recorded. While they were waiting to perform, some received text messages from their romantic partner, who was waiting in another room. These scripted texts were either explicitly supportive (for example, “Don’t worry. It’s just a psych study. You’ll be fine”), whereas others were more mundane (“It’s cold in here”).

Analysis of the physiological data revealed that the mundane texts, though not the “supportive” ones, reduced the women’s blood pressure during both preparation and the task itself. When you’re under psychological pressure, being reminded that there’s someone out there who really cares for you seems to be more helpful than receiving targeted advice. In fact, the potential risks of offering “helpful” advice have been highlighted in other work. A recent meta-analysis of 142 studies looking at how to help struggling employees concluded that simply making job-related support available — for example, new equipment or career counselling — is often helpful, but overtly discussing a problem can backfire. “That finding might be because not all support is good support,” said Michael Mathieu at San Francisco State University, who led the study. For example, reaching out to try to help a co-worker might be taken as an insult, he suggests.

If your partner somehow neglects to send a simple reminder of their implicit support before you go into your important meeting, or stand up to give that paper, they may still be able to help you. Just visualising your partner can moderate your body’s physiological response to stress, according to research at the University of Arizona led by Kyle Bourassa. (In this study, the stressor was physical – volunteers had to submerge their feet into cold water – but in theory, the same effect could hold for other forms of stress.) In some trials, participants actually had their partner in the same room. These people reported less pain than those who just imagined that their partner was there, but the blood pressure data for the two groups were statistically equivalent. “The results suggest that accessing the mental representation of a romantic partner and a partner’s presence each buffer against exaggerated acute stress responses to a similar degree,” the researchers write.

It’s possible that, in modulating physiological arousal, this kind of technique may reduce the risk of choking under pressure. This phenomenon is familiar to many of us. When the pressure gets “too much”, our skills suddenly deteriorate, and we perform more poorly than we, or anyone else, expected. Unsurprisingly, this phenomenon has been extensively studied in sport. One analysis of the performance of elite tennis players, led by Danny Cohen-Zada, concluded that the male players were about twice as adversely affected by high pressure as the female players, perhaps because men typically show a bigger spike in levels of the stress hormone cortisol when under pressure than women do. (“Our robust evidence that women can respond better than men to competitive pressure is compelling,” the researchers noted.)

The opposite to choking under pressure is sometimes called “clutch performance”. A group led by Christian Swann at the University of Wollongong, Australia interviewed 16 top athletes and asked them to describe what they were thinking and feeling during a recent outstanding “clutch” performance. This led them to identify 12 characteristics associated with excelling under pressure. Six were similar to the state of flow (they became so involved in their task they became unaware of the crowd, for example). But six were different. They included being deliberately focused on the task in hand, maintaining intense effort over a period of time, feeling high arousal levels, and not thinking about what would happen if they failed. The athletes talked about making a big effort to monitor their own performance as they played, to raise their game. (It’s worth noting that though the athletes talked about feeling high levels of arousal, their actual physiological arousal was not monitored. There’s certainly work finding that arousal helps with performance — only to a point.)

It’s interesting that the athletes mentioned not thinking about the negative consequences of failure. Because this brings us back to mindsets. Work published earlier this year (led by Vikram Chib) found that simply altering how you view what’s at stake in a high-pressure situation can dramatically reduce the risk of choking.

The participants in this study were asked to play a computer-based game in which they could win money. But when they were instructed to imagine that they already had the high prize money on offer, and were playing for the chance to keep it, rather than to gain it, they were much less likely to choke. (The researchers tied this to altered levels of activity in a region of the brain called the ventral striatum.) A skin conductance measure also showed that this reappraisal prevented heightened stress when they failed. Playing make-believe had, it seems, taken the pressure out of the situation.

More work needs to be done to explore the potential benefits of this approach, as well as the positive stress mindset, in real-world situations. But next time you’re under pressure to perform, why not try embracing the opportunity to achieve — and imagine that you’ve already succeeded?

Reprinted with permission of The British Psychological Society. Read the original article.

There are many things in life that cannot be improved with greater effort. Sometimes, life requires that you step back.
Health

It’s the clitoris, stupid!
Up Next
Neuropsych

Most of us can’t imagine wanting absolute control over a nation or feeling compelled to commit mass murders — so then what is it about a dictator’s psychology that makes them different?