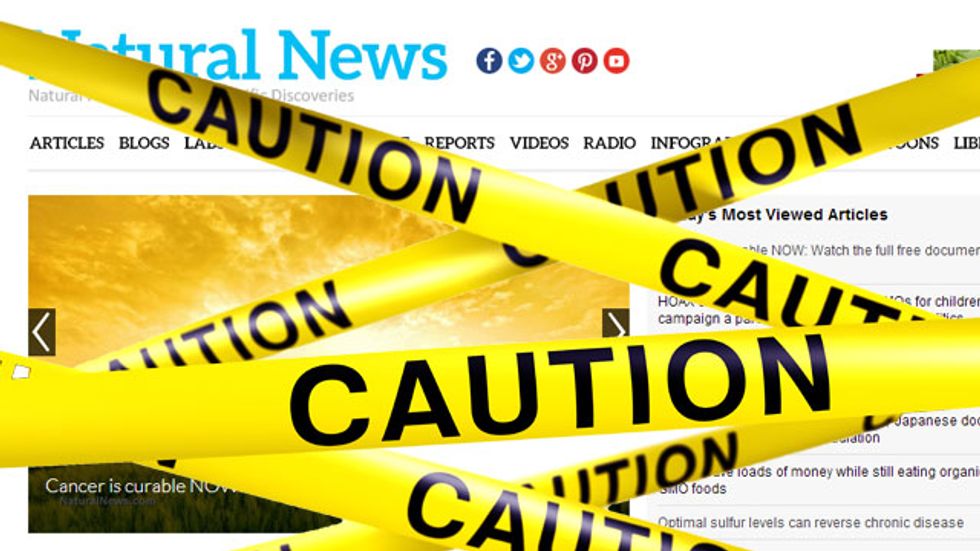 If there was an award for the single greatest hub of pseudoscience on the internet, the website Natural News would well and truly take the crown tin foil hat. Expect to find anti-vaccine paranoia which extends not only to your garden variety antivaxxer favorites such as the debunked link to autism but to crackpot claims that vaccines caused the "cancer epidemic" and were even responsible for the "origin" of AIDS. According to Natural News, Microsoft is developing "eugenics vaccines that target specific races and nationalities with infertility-inducing pharmaceuticals". Alongside this you'll also find full blown AIDS denialism:

According to Natural News, "HIV does NOT cause AIDS. HIV does not cause anything. A staggering statement given the hype and acceptance by the scientific establishment and, through them, the public that the HIV virus is the only cause of AIDS. HIV is a weak virus and does not dismantle the immune system. Nor is AIDS passed on sexually."

It is worth noting that the above blog post is authored by David Icke, the man who believes that the world is controlled by a race of reptiles from outer space who reside in underground tunnels. If you thought things couldn't get much darker than AIDS denialism, you'd be wrong. Natural News reached dangerous new levels of hysteria when it published a post indirectly calling for the deaths of journalists, publishers and scientists who have worked on the topic of genetically modified organisms. In this latest post Mike Adams, the creator of Natural News, calls for the creation of a list of pro-GMO "publishers, journalists and scientists":

"Just as history needed to record the names and deeds of Nazi war criminals, so too must all those collaborators who are promoting the death and destruction caused by GMOs be named for the historical record. The true extent of their collaboration with an anti-human regime will all become readily apparent once the GMO delusion collapses and mass global starvation becomes an inescapable reality."

In the same blog post, Adams states (apparently with no relevance to his statements describing scientists, journalists and publishers as guilty of "genocide") the following "fundamental philosophical truth": "It is the moral right -- and even the obligation -- of human beings everywhere to actively plan and carry out the killing of those engaged in heinous crimes against humanity."

Shortly after publishing this, Adams updated his post, linking to a website which he writes was "inspired by a suggestion from this story" which lists the names of journalists (whose names I won't repeat here) and publishers including Discover Magazine, Alternet, National Geographic and Forbes. The list of scientists is ominously labelled "under construction".

Adams appears careful to distance himself from his justification of the murder of journalists, publishers and scientists, following his case with the disclaimer:"Do not misinterpret this article as any sort of call for violence, as I wholly disavow any such actions. I am a person who demands due process under the law for all those accused of crimes"

In a classic "I'm not racist but..." style remark, Adams immediately follows his disclaimer against violence with a line that seems designed to encourage the reader to conclude for themselves that violence against journalists, publishers and scientists is the only way to save the world from the "evil" scientists: "But what is the appropriate punishment for the criminal act of unleashing genetic pollution across our planet, contributing to mass crop failures, collapsing indigenous seed diversity, instigating widespread human starvation, suppressing scientific knowledge and dousing the world's farmlands with the toxic chemical glyphosate? How do you even decide on a punishment that can fit the scale and magnitude of such a collection of crimes?"

In what appears to be an attempt to backtrack, perhaps due to the realisation of the severity of what he has written, Adams has now updated his story yet again, claiming the list, which he suggested be created: "...is a bait-and-switch trap engineered by the biotech industry in an effort to lure in support from GMO skeptics and then discredit them with some sort of insane "call to action" of some kind".

In a few short days we've witnessed the creation of yet another brand new conspiracy theory from start to finish. To further complicate matters, the hit list that Adams claims he has nothing to do with, was created hours before Adams' blog post calling for its creation and evidence has now emerged that the website was created by the same person that created Natural News.

Back to the less extremist but no less deluded beliefs that have been put forward on the website; Natural News once claimed that a paper in Nature Neuroscience provided evidence for astrology (yes the belief that the position of planets at the time you were born affects your personality), spoiler: it didn't and for that matter it had nothing whatsoever to do with planets, let alone astrology. Other obviously made up stories include that “People Who Grow Their Own Food (are) Labeled 'Extremist' by Dept. of Defense” as one Natural News headline put it. Five months after Slate's request for evidence for this claim Natural News remains silent. Mike Adams' views on Skeptiks are so absurd, fanatical and plainly made up, that it's almost impossible to believe that you're not reading The Onion.

Coincidentally, alongside the conspiracy theories on Natural News, you will find an assortment of miracle cures (which conveniently happen to be sold on the site). Earlier this year Natural News set up a "laboratory" that so far seemingly consists of nothing whatsoever except a lone mass spectrometer and a white lab coat:

Since then, Natural News have pumped out "findings" of heavy metals in various health foods. They've also claimed to have discovered heavy metals in flu vaccines - which they would have discovered far more easily if they'd.. erm.. simply read the label of the vaccine. The relevance of this information is parodied in an amusing blog post by skeptical blogger Paul Gallagher.

Predictably, the evidence to back up this claim is nonexistent. Adams' response to skeptics is even more staggering: "The only people who argue with this are those who are already mercury poisoned and thus incapable of rational thought. Mercury damages brain function, you see, which is exactly what causes some people to be tricked into thinking vaccines are safe and effective"

So if you're not on board Natural News' express train to cloud cuckoo land, you are obviously already brain damaged by mercury,  well now it all makes perfect sense. If the implications of Adams' website weren't so serious, the whole affair would be comical; however, the reach of Natural News is really quite staggering. Adams claims 7 million unique readers per month, to put that figure in context, even conservative estimates by a third party ratings service, of 1.7 million visitors per month puts Natural News into the same range of influence as the Mayo Clinic, with double the monthly readership of the US government's official website about cancer - Cancer.gov and twenty times the readership of the US government website about alternative medicines. With over a million Facebook likes it is more than likely that you know at least one person who inadvertently liked their page, perhaps after reading one of Natural News' more innocuous articles. Thanks to Facebook's new graph search you can click here to see which of your Facebook friends like their page. You might like to take this opportunity to send them this blog post to let them know exactly what it is they have subscribed to.

Postscript: If you ever feel the need to link for whatever reason to Natural News' content please link via a service such as Do Not Link (or use a Nofollow tag), one reason Natural News can claim millions of visitors per month is the number of websites that debunk their content but inadvertently increase their Google Ranking by providing links in. Using the Nofollow HTML attribute allows you to debunk the content of sites like Natural News without helping them in the process.