How autonomous weapons will be utilized in our military is uncertain. Paul Scharre shares why their future use on the battlefield should be carefully considered. 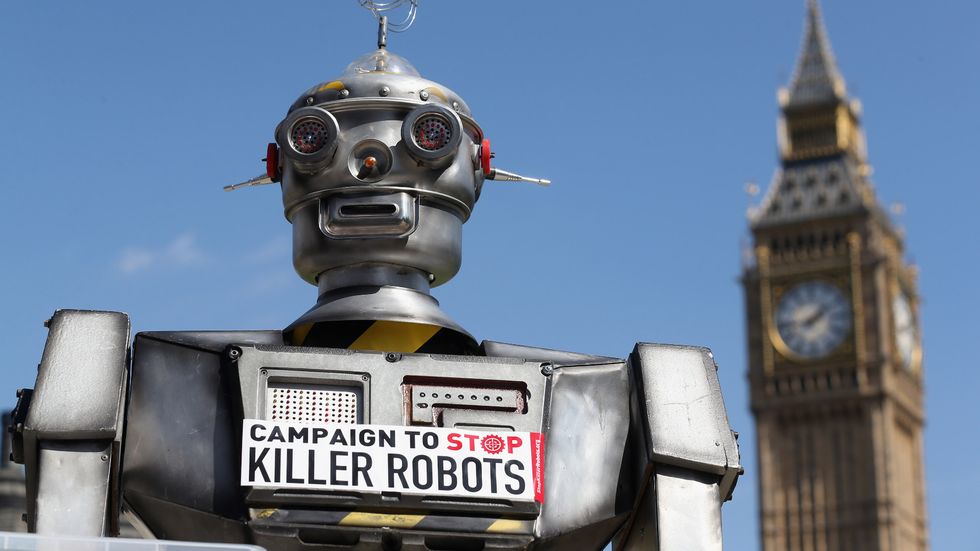 Autonomous weapons may be the future machines of war. However, their use “raise novel questions of risk,”writes former Pentagon official, Paul Scharre, which is why their future use on the battlefield should be carefully considered.

Scharre directs the 20YY Future of Warfare Initiative at Center for a New American Security (CNAS), a policy research group in Washington, D.C. In the report Autonomous Weapons and Operational Risk, Scharre discusses the kinds of failures that could ensue should the military implement fully autonomous systems.

Scharre admits that much of our fears pertaining to automated systems are driven by what we've read in science-fiction novels. In truth, robot systems have a ability to lead to a utopic society. Autonomous cars are a perfect example of how robots can create a better future.

“I think 100 years from now, people will look back and say, 'Really? People used to drive their cars? What are they, insane?' Humans are the worst control system to put in front of a car,” says Peter H. Diamandis, the chairman and CEO of the XPRIZE Foundation.

Robot systems lack the flexibility to adapt to new situations that arise. They do exactly as they're programmed and lack the ability to “step outside their instructions and employ 'common sense.'”

“Anyone who has ever been frustrated with an automated telephone call support helpline, an alarm clock mistakenly set to ‘p.m.’ instead of ‘a.m.,’ or any of the countless frustrations that come with interacting with computers, has experienced the problem of ‘brittleness’ that plagues automated systems,” Mr. Scharre writes.

Scharre advocates for what he describes as “Centaur Warfighting”--a human-machine team working together. The human would act as the fail-safe, moral compass, and overseer of the machine's operations. While the robot would execute commands made by the human with more precision and accuracy. “[T]eaming cognitive architectures can leverage the predictability, reliability, and speed of automation while retaining the robustness and flexibility of human intelligence. Whenever possible, human-machine teaming will be preferred.”

“The AIs can analyze possible moves and identify vulnerabilities or opportunities the human player might have missed, resulting in blunder-free games,” Scharre explains. “The human player can manage strategy, prune AI searches to focus on the most promising areas, and manage differences between multiple Ais. The chess AI, or multiple AIs, gives feedback to the human player, who then decides what move to make.”

How autonomous weapons will be utilized in our military is uncertain. It's an ongoing discussion, but an important one to be aware of. Many of the world's brightest minds have already weighed in, and they're worried the development of AI is out-pacing our ability to regulate it. Technology should be used to benefit humanity—not create a Skynet dystopia. Stephen Hawking and Elon Musk have made their mistrust of artificial intelligence well-known. Even the Bulletin of the Atomic Scientists warned that if disruptive technological advancements continue to go unchecked, humanity could face a global catastrophe.

Peter Warren Singer, senior fellow and director of the 21st Century Defense Initiative at the Brookings Institution, has interviewed a number of experts about the possibility of a robot apocalypse. He found many of them thought it wasn't possible or it was a silly idea. However, Singer recalls what one Pentagon scientist said to him; he said, “'You know, I’m probably working on something that’s either going to kill or enslave my grandkids, but, you know, it’s really cool stuff, so why stop?'”