Scientists pick up signals from an explosion of electromagnetic energy that occurred when a black hole ripped apart a passing star. 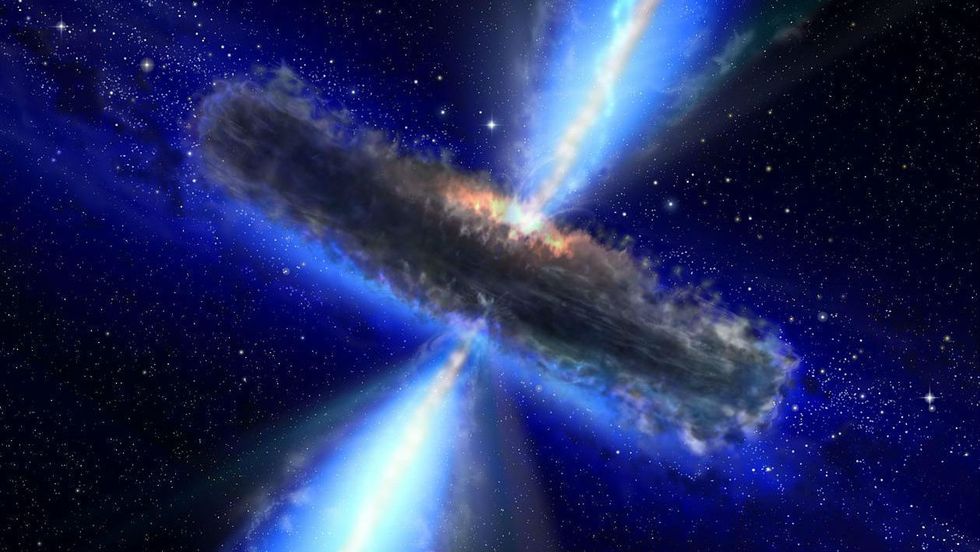 In this handout from NASA/ESA, an artist's concept illustrates a quasar, or feeding black hole. (Photo by NASA/ESAvia Getty Images)

Signals suggest black hole emits a jet of energy proportional to the stellar material it gobbles up.

On Nov. 11, 2014, a global network of telescopes picked up signals from 300 million light years away that were created by a tidal disruption flare — an explosion of electromagnetic energy that occurs when a black hole rips apart a passing star. Since this discovery, astronomers have trained other telescopes on this very rare event to learn more about how black holes devour matter and regulate the growth of galaxies.

Scientists from MIT and Johns Hopkins University have now detected radio signals from the event that match very closely with X-ray emissions produced from the same flare 13 days earlier. They believe these radio “echoes,” which are more than 90 percent similar to the event’s X-ray emissions, are more than a passing coincidence. Instead, they appear to be evidence of a giant jet of highly energetic particles streaming out from the black hole as stellar material is falling in.

Dheeraj Pasham, a postdoc in MIT’s Kavli Institute for Astrophysics and Space Research, says the highly similar patterns suggest that the power of the jet shooting out from the black hole is somehow controlled by the rate at which the black hole is feeding on the obliterated star.

Pasham says scientists have suspected that black hole jets are powered by their accretion rate, but they have never been able to observe this relationship from a single event.

“You can do this only with these special events where the black hole is just sitting there doing nothing, and then suddenly along comes a star, giving it a lot of fuel to power itself,” Pasham says. “That’s the perfect opportunity to study such things from scratch, essentially.”

Pasham and his collaborator, Sjoert van Velzen of Johns Hopkins University, report their results in a paper published this week in the Astrophysical Journal.

Based on theoretical models of black hole evolution, combined with observations of distant galaxies, scientists have a general understanding for what transpires during a tidal disruption event: As a star passes close to a black hole, the black hole’s gravitational pull generates tidal forces on the star, similar to the way in which the moon stirs up tides on Earth.

However, a black hole’s gravitational forces are so immense that they can disrupt the star, stretching and flattening it like a pancake and eventually shredding the star to pieces. In the aftermath, a shower of stellar debris rains down and gets caught up in an accretion disk — a swirl of cosmic material that eventually funnels into and feeds the black hole.

This entire process generates colossal bursts of energy across the electromagnetic spectrum. Scientists have observed these bursts in the optical, ultraviolet, and X-ray bands, and also occasionally in the radio end of the spectrum. The source of the X-ray emissions is thought to be ultrahot material in the innermost regions of the accretion disk, which is just about to fall into the black hole. Optical and ultraviolet emissions likely arise from material further out in the disk, which will eventually be pulled into the black hole.

However, what gives rise to radio emissions during a tidal disruption flare has been up for debate.

Some scientists propose that, in the moments after the stellar explosion, a shockwave propagates outward and energizes the plasma particles in the surrounding medium, in a process that in turn emits radio waves. In such a scenario, the pattern of emitted radio waves would look radically different from the pattern of X-rays produced from infalling stellar debris.

“What we found basically challenges this paradigm,” Pasham says.

Pasham and van Velzen looked through data recorded from a tidal disruption flare discovered in 2014 by the global telescope network ASASSN (All-sky Automated Survey for Supernovae). Soon after the initial discovery, multiple electromagnetic telescopes focused on the event, which astronomers coined ASASSN-14li. Pasham and van Velzen perused radio data from three telescopes of the event over 180 days.

The researchers looked through the compiled radio data and discovered a clear resemblance to patterns they had previously observed in X-ray data from the same event. When they fit the radio data over the X-ray data, and shifted the two around to compare their similarities, they found the datasets were most similar, with a 90 percent resemblance, when shifted by 13 days. That is, the same fluctuations in the X-ray spectrum appeared 13 days later in the radio band.

“The only way that coupling can happen is if there is a physical process that is somehow connecting the X-ray-producing accretion flow with the radio-producing region,” Pasham says.

It was only when electrons traveled downstream of the jet that the radio waves could escape — producing the signal that the researchers eventually detected. Thus, they say, the strength of the jet must be controlled by the accretion rate, or the speed at which the black hole is consuming X-ray-emitting stellar debris.

Ultimately, the results may help scientists better characterize the physics of jet behavior — an essential ingredient in modeling the evolution of galaxies. It’s thought that galaxies grow by producing new stars, a process that requires very cold temperatures. When a black hole emits a jet of particles, it essentially heats up the surrounding galaxy, putting a temporary stop on stellar production. Pasham says the team’s new insights into jet production and black hole accretion may help to simplify models of galaxy evolution. “If the rate at which the black hole is feeding is proportional to the rate at which it’s pumping out energy, and if that really works for every black hole, it’s a simple prescription you can use in simulations of galaxy evolution,” Pasham says. “So this is hinting toward some bigger picture.”