Results are among the strongest evidence yet for “spooky action at a distance.”\r\n\r\n 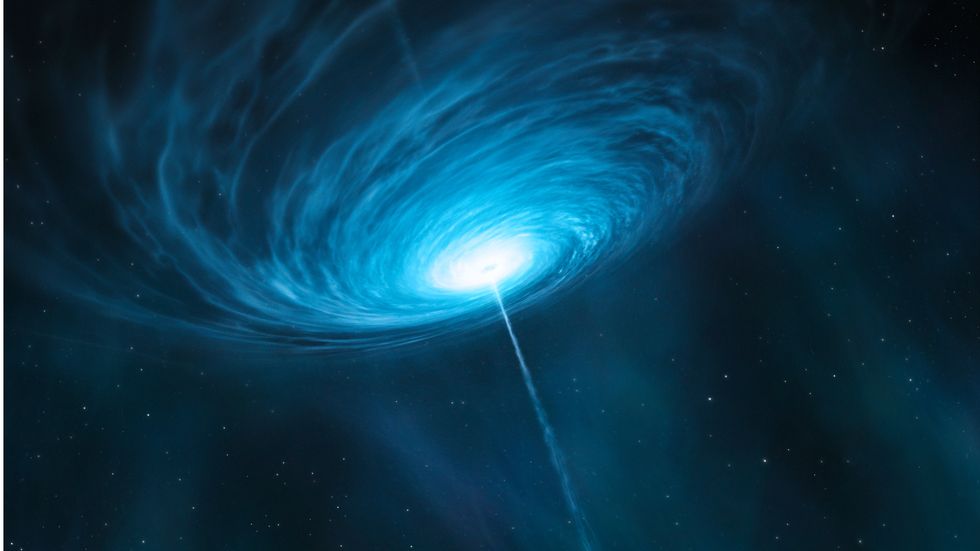 An artist’s impression of the quasar 3C 279. Image credit: ESO/M. Kornmesser, via Wikipedia.

Results are among the strongest evidence yet for “spooky action at a distance.”

Last year, physicists at MIT, the University of Vienna, and elsewhere provided strong support for quantum entanglement, the seemingly far-out idea that two particles, no matter how distant from each other in space and time, can be inextricably linked, in a way that defies the rules of classical physics.

Take, for instance, two particles sitting on opposite edges of the universe. If they are truly entangled, then according to the theory of quantum mechanics their physical properties should be related in such a way that any measurement made on one particle should instantly convey information about any future measurement outcome of the other particle — correlations that Einstein skeptically saw as “spooky action at a distance.”

In the 1960s, the physicist John Bell calculated a theoretical limit beyond which such correlations must have a quantum, rather than a classical, explanation.

But what if such correlations were the result not of quantum entanglement, but of some other hidden, classical explanation? Such “what-ifs” are known to physicists as loopholes to tests of Bell’s inequality, the most stubborn of which is the “freedom-of-choice” loophole: the possibility that some hidden, classical variable may influence the measurement that an experimenter chooses to perform on an entangled particle, making the outcome look quantumly correlated when in fact it isn’t.

Last February, the MIT team and their colleagues significantly constrained the freedom-of-choice loophole, by using 600-year-old starlight to decide what properties of two entangled photons to measure. Their experiment proved that, if a classical mechanism caused the correlations they observed, it would have to have been set in motion more than 600 years ago, before the stars’ light was first emitted and long before the actual experiment was even conceived.

Now, in a paper published today in Physical Review Letters, the same team has vastly extended the case for quantum entanglement and further restricted the options for the freedom-of-choice loophole. The researchers used distant quasars, one of which emitted its light 7.8 billion years ago and the other 12.2 billion years ago, to determine the measurements to be made on pairs of entangled photons. They found correlations among more than 30,000 pairs of photons, to a degree that far exceeded the limit that Bell originally calculated for a classically based mechanism.

“If some conspiracy is happening to simulate quantum mechanics by a mechanism that is actually classical, that mechanism would have had to begin its operations — somehow knowing exactly when, where, and how this experiment was going to be done — at least 7.8 billion years ago. That seems incredibly implausible, so we have very strong evidence that quantum mechanics is the right explanation,” says co-author Alan Guth, the Victor F. Weisskopf Professor of Physics at MIT.

“The Earth is about 4.5 billion years old, so any alternative mechanism — different from quantum mechanics — that might have produced our results by exploiting this loophole would’ve had to be in place long before even there was a planet Earth, let alone an MIT,” adds David Kaiser, the Germeshausen Professor of the History of Science and professor of physics at MIT. “So we’ve pushed any alternative explanations back to very early in cosmic history.”

A decision, made billions of years ago

In 2014, Kaiser and two members of the current team, Jason Gallicchio and Andrew Friedman, proposed an experiment to produce entangled photons on Earth — a process that is fairly standard in studies of quantum mechanics. They planned to shoot each member of the entangled pair in opposite directions, toward light detectors that would also make a measurement of each photon using a polarizer. Researchers would measure the polarization, or orientation, of each incoming photon’s electric field, by setting the polarizer at various angles and observing whether the photons passed through — an outcome for each photon that researchers could compare to determine whether the particles showed the hallmark correlations predicted by quantum mechanics.

An artist’s impression shows the material ejected from the region around the supermassive black hole in the quasar SDSS J1106+1939. Image credit: ESO/L. Calçada via Wikipedia.

The team added a unique step to the proposed experiment, which was to use light from ancient, distant astronomical sources, such as stars and quasars, to determine the angle at which to set each respective polarizer. As each entangled photon was in flight, heading toward its detector at the speed of light, researchers would use a telescope located at each detector site to measure the wavelength of a quasar’s incoming light. If that light was redder than some reference wavelength, the polarizer would tilt at a certain angle to make a specific measurement of the incoming entangled photon — a measurement choice that was determined by the quasar. If the quasar’s light was bluer than the reference wavelength, the polarizer would tilt at a different angle, performing a different measurement of the entangled photon.

In their previous experiment, the team used small backyard telescopes to measure the light from stars as close as 600 light years away. In their new study, the researchers used much larger, more powerful telescopes to catch the incoming light from even more ancient, distant astrophysical sources: quasars whose light has been traveling toward the Earth for at least 7.8 billion years — objects that are incredibly far away and yet are so luminous that their light can be observed from Earth.

On Jan. 11, 2018, “the clock had just ticked past midnight local time,” as Kaiser recalls, when about a dozen members of the team gathered on a mountaintop in the Canary Islands and began collecting data from two large, 4-meter-wide telescopes: the William Herschel Telescope and the Telescopio Nazionale Galileo, both situated on the same mountain and separated by about a kilometer.

One telescope focused on a particular quasar, while the other telescope looked at another quasar in a different patch of the night sky. Meanwhile, researchers at a station located between the two telescopes created pairs of entangled photons and beamed particles from each pair in opposite directions toward each telescope.

In the fraction of a second before each entangled photon reached its detector, the instrumentation determined whether a single photon arriving from the quasar was more red or blue, a measurement that then automatically adjusted the angle of a polarizer that ultimately received and detected the incoming entangled photon.

“The timing is very tricky,” Kaiser says. “Everything has to happen within very tight windows, updating every microsecond or so.”

The researchers ran their experiment twice, each for around 15 minutes and with two different pairs of quasars. For each run, they measured 17,663 and 12,420 pairs of entangled photons, respectively. Within hours of closing the telescope domes and looking through preliminary data, the team could tell there were strong correlations among the photon pairs, beyond the limit that Bell calculated, indicating that the photons were correlated in a quantum-mechanical manner.

Guth led a more detailed analysis to calculate the chance, however slight, that a classical mechanism might have produced the correlations the team observed.

He calculated that, for the best of the two runs, the probability that a mechanism based on classical physics could have achieved the observed correlation was about 10 to the minus 20 — that is, about one part in one hundred billion billion, “outrageously small,” Guth says. For comparison, researchers have estimated the probability that the discovery of the Higgs boson was just a chance fluke to be about one in a billion.

“We certainly made it unbelievably implausible that a local realistic theory could be underlying the physics of the universe,” Guth says.

And yet, there is still a small opening for the freedom-of-choice loophole. To limit it even further, the team is entertaining ideas of looking even further back in time, to use sources such as cosmic microwave background photons that were emitted as leftover radiation immediately following the Big Bang, though such experiments would present a host of new technical challenges. “It is fun to think about new types of experiments we can design in the future, but for now, we are very pleased that we were able to address this particular loophole so dramatically. Our experiment with quasars puts extremely tight constraints on various alternatives to quantum mechanics. As strange as quantum mechanics may seem, it continues to match every experimental test we can devise,” Kaiser says.

This research was supported in part by the Austrian Academy of Sciences, the Austrian Science Fund, the U.S. National Science Foundation, and the U.S. Department of Energy.