In 1930, Upton Sinclair’s wife, Mary, was experiencing serious depression. The couple became dedicated to the occult during this time; Upton believed Mary to have psychic abilities. His resulting book, Mental Radio, documented the tests he administered to test her mind-reading skills.

Sinclair published many important books across multiple genres, most famously The Jungle, which changed how Americans view the meatpacking industry—today’s vegetarian movement has his investigative journalism to thank. But Mental Radio was not received well. After he initially self-published the book, critics denounced his work as not serious science (there was no control; it was not a double-blind study) and for expressing an uncritical faith in telepathy.

Clairvoyance has never done well in clinical settings, yet that has not stopped an entire contingent of mediums and psychics from claiming to possess such skills. Even Sinclair’s data expresses little more than chance, but considering the circumstances he likely wanted to believe his hypothesis to be true, perhaps as a way of helping his wife deal with her psychological disorder. 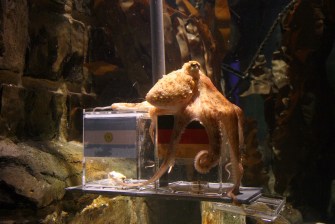 An octopus named Paul sits on a box decorated with a German flag and a shell inside on June 29, 2010 at the Sea Life aquarium in Oberhausen, western Germany. (Photo by Patrik Stollarz/AFP/Getty Images)

Telepathy in the traditionally used sense is suspect—the notion I can “see” inside your brain and pick out thoughts or images. We’re so fascinated with telepathy some had faith in an octopus named Paul predicting the winner of World Cup games. This is different from intuition, whose mechanisms are better understood. A hunch has a basis in observation skills and psychology. Outright mind reading, especially across space and time, has never yielded positive results.

Maybe we need to redefine what mind reading entails. At least that’s the consensus from a team of neuroscientists at the University of Toronto Scarborough, which recently reconstructed images based on data gathered from EEG scans. The study, published in eNeuro, could have broad implications in our understanding of how we construct images and remember events, or, in this case, faces.

The recognition of faces is an important social skill that relies upon near-instantaneous visual processing. The researchers wanted to find out if they could reconstruct faces from neural data provided by brain scans. As they conclude in their study, “the present work accounts for the time course of face individuation through appeal to its underlying visual representations while, also, it provides a first demonstration regarding the ability to reconstruct the appearance of stimulus images from electroencephalography data.”

For the study, thirteen healthy adults—six males, seven females, between the ages of 18-27—with normal vision were shown 140 images of seventy individuals. Their brain activity was recorded and used to reconstruct the faces based on the machine’s algorithms. While similar studies have been conducted using fMRI, that method is more expensive and requires more equipment. fMRI also captures images over seconds, while EEG registers information in milliseconds. 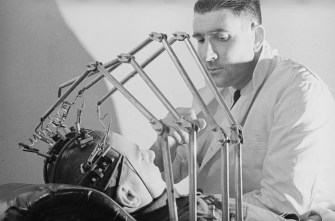 December 1940: A doctor measuring the brainwaves of a military casualty at Sutton Emergency Hospital. (Photo by Fox Photos/Getty Images)

As postdoctoral fellow Dan Nemrodov, who developed this technique, says,  “When we see something, our brain creates a mental percept, which is essentially a mental impression of that thing. We were able to capture this percept using EEG to get a direct illustration of what’s happening in the brain during this process.”

This could provide an important step forward in our justice system, as law enforcement officials will be able to better construct faces from data collected through scans of victims’ brains. As assistant professor Adrian Nestor, whose lab Nemrodov works in, states,

“What’s really exciting is that we’re not reconstructing squares and triangles but actual images of a person’s face, and that involves a lot of fine-grained visual detail. The fact we can reconstruct what someone experiences visually based on their brain activity opens up a lot of possibilities. It unveils the subjective content of our mind and it provides a way to access, explore and share the content of our perception, memory and imagination.”

Though we might not have discovered the mind palace yet, this fascinating breakthrough brings us one step closer to understanding the mechanisms of consciousness. The applications of this technique will be limited only by our imagination, which we are now also closer to understanding. So the next time you visit a psychic, ask for their EEG machine. That way you might actually get what you pay for.

Related
Thinking
“Give a f***, actually”: The surprising benefits of being grateful for things you dislike
Radical Emotional Acceptance calls on you to celebrate all of life’s emotions — even the negative ones.
Thinking
Visual thinking: How to understand the inner lives of animals
Humans are good visual thinkers, too, but we tend to privilege verbal thinking.
Strange Maps
The world’s longest straight line connects Portugal to China
It’s nearly 20,000 miles long.
The Well
This is what the fourth dimension looks like
Left–Right, Back–Forth, Up–Down. What’s the fourth dimension?
▸
3 min
—
with
Brian Greene
The Past
How the death of alchemy gave birth to modern science
Far from practicing witchcraft, the experimentation of medieval alchemists helped bring about the Scientific Revolution.
Up Next
Culture & Religion
We need the singular ‘they’ – and it won’t seem wrong for long
“Enforcing language norms is a way of enforcing power structures.”