I have a confession to make, I think I’m pretty smart. And I know I’m not alone here. Our savviness with modern technology helps to support this notion. But how old is human-like thinking, anyway? And is it something we can measure?

A neuroarchaeologist contends that human-like thinking is up to 1.8 million years-old and took root in our ancient hominid ancestor, Homo erectus (“upright man”). The study was published in the journal Nature Human Behavior.” Shelby S. Putt conducted the study. She’s a postdoctoral researcher with The Stone Age Institute at Indiana University.

Putt said, “This is a significant result because it’s commonly thought our most modern forms of cognition only appeared very recently in terms of human evolutionary history.” She added, “But these results suggest the transition from apelike to humanlike ways of thinking and behaving arose surprisingly early.”

Neuroarchaeology is a new field which seeks to understand how ancient hominids and humans evolved cognitively. This is achieved through studying modern humans. A difficult field of study to be sure, as no trace of prehistoric thought can be discovered, outside artifacts left behind, and us, the living remnants of our ancestors lives and actions. In this study, Dr. Putt used brain imaging technology on ordinary people while having them make primitive stone tools. 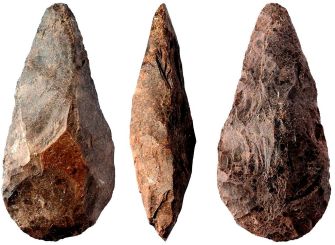 She found evidence that this type of thinking could have appeared as far back as 1.8 million years ago. Homo erectus,sometimes called Homo ergaster, was the first really human-like hominid on the scene. It walked upright and had bodily proportions similar to us.

These would include physical features such as longer legs and shorter arms compared to the abdomen, changes indicating a ground-dwelling species, rather than the longer arms and shorter legs necessary for life in the trees. H. erectus could walk upright and run, cared for the sick and the weak, and even covered significant territory. They were also around for a really, really long time, nine times longer than modern humans. This was one of the longest lived hominid species. 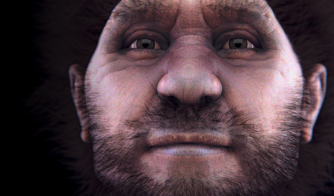 Dr. Putt was able to date human-like cognition thanks to advances in brain imaging technology. Before, a subject would have to lie in an FMRI machine for a scan. A cramped, metal tube is an impossible place to fashion stone tools in. In this study, Putt and colleagues used near-infrared spectroscopy. They essentially put volunteers into a lightweight cap with wires sprouting out of it.

Each wire carries a sensitive laser which taken together, can monitor brain activity. 31 individuals volunteered for the study. They gained some instruction and then commenced fashioning the tools. 15 volunteers heard instructions and watched a video on how to construct said tools, while another 16 were given nonverbal instructions only.

Both groups were asked to make Oldowan-era “flake tools,” stones with a flat, jagged edge, and Acheulian-era hand axes—essentially a large arrowhead. Oldowan tools date back some 2.6 million years. These are the earliest tools ever used. Acheulian hand axes go back 1.8 million to 100,000 years ago. Both types are made by flint-knapping, or smashing one rock against another. 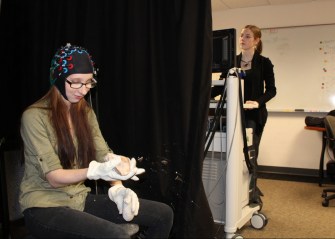 Experiments were conducted in the lab of John P. Spencer at the University of Iowa, where Putt earned her PhD. What they discovered was that the parts of the brain used to create Oldowan tools are responsible for motor control and visual attention. The more intricate Acheulian tools, required a lot more of the brain’s real estate. Fashioning one activates the superior temporal cortex, ventral precentral gyrus, and supplementary motor areas.

These are responsible for visual working memory, integrating visual and auditory sensorimotor information, and higher-order action planning. In the paper, researchers wrote, “Our data suggest this cognitive network was probably necessary for early Homo to make Acheulian hand axes and might also have been important for other learned, complex behaviors.”

The fact these more advanced forms of cognition were required to create Acheulean hand axes – but not simpler Oldowan tools – means the date for this more human-like type of cognition can be pushed back to at least 1.8 million years ago, the earliest these tools are found in the archaeological record. Strikingly, these parts of the brain are the same areas engaged in modern activities like playing the piano.

According to study co-author John Spencer, now at the University of East Anglia, the same brain networks help humans today in creative pursuits, such as playing a musical instrument. So perhaps Homo erectus was making music as well.

To learn about the earliest stone tools ever discovered, click here:

How strong was a T. rex’s bite, anyway? Science has an answer.

Your bones would “explode.”