According to psychologist Arthur Aaron, four minutes of eye contact between two people can create feelings of intimacy. In one famous experiment, over 20 years old now, Dr. Aaron had two strangers in his lab gaze into each other’s eyes and they fell in love. Writer Mandy Len Catron at the University of British Columbia, decided to try the technique on her own. But she added a twist, a list of 36 questions which get increasingly more intimate as the process rolls along.

The questions along with the four minute eye gazing session is supposed to make you fall in love. She and her male suitor, outlined in a popular piece for The New York Times, went through the questions, then practiced the eye contact technique. Catron insists by the end that she and her beau decided to fall in love. They weren’t merely pushed together by outside forces. But the process they went through may have served as a catalyst.

Ten years ago, researchers at Cambridge discovered that we can in fact, read the thoughts and emotions of others accurately by gazing into their eyes. From this, they developed what they called the “Reading the Mind in the Eyes” test, which can also accurately measure one’s cognitive empathy, or the ability to read the others emotions. Some people are naturally better at it than others. Researchers also found that women tend to be more attuned to other people’s emotional status than men. 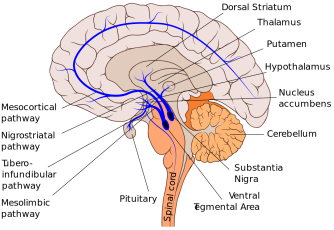 The striatum is the area of the brain responsible for cognitive empathy. Wikipedia Commons.

Now, Cambridge researchers, Along with some international colleagues, just completed a follow-up project, where they discovered another piece of the puzzle. Besides Cambridge, colleagues from France, Australia, and the Netherlands, along with scientists at the firm 23andMe, contributed. The team has now identified the genetic underpinnings of cognitive empathy. The results were published in the journal Molecular Psychiatry.

Varun Warrier, a Cambridge PhD student, led the study, along with Professors Simon Baron-Cohen at Cambridge and Thomas Bourgeron, of the University Paris Diderot and the Institut Pasteur. According to Warrier, “This is the largest ever study of this test of cognitive empathy in the world.” He added, “This is also the first study to attempt to correlate performance on this test with variation in the human genome.” The findings could help researchers determine why there’s such variation in cognitive empathy across our species.

Investigators tested nearly 89,000 people from around the globe. Most of those who underwent “The Eyes Test” were already 23andMe customers, who opted to become a part of this study. These results support the original finding that women generally score better in cognitive empathy.

The real nuance here is that researchers identified genes which influence Eyes Test performance. Genetic variants on chromosome 3 allow women to read another person’s thoughts and feelings through their eyes. What’s interesting is, the same chromosomal location in males was not associated with cognitive empathy. This research was cross-referenced with the Brisbane Longitudinal Twin Study. It included 1,500 participants and showed the same results. An area on chromosome 3 is responsible for cognitive empathy. Wikipedia Commons.

The striatum is the area of the brain which deals with cognitive empathy. Those who had high scores on the Eyes Test, through brain scans, were shown to have greater volume in the striatum. A small segment of chromosome 3, called LRRN1 (Leucine Rich Neuronal 1), is highly active in this part of the brain. So researchers believe that this area of chromosome 3 is responsible for cognitive empathy, but only in women.

In the past, The Eyes Test has been administered to anorexics and those with autism. Both groups score very low. Those genetic variants which translate into higher scores, increase one’s likelihood of becoming anorexic, but doesn’t seem to affect the autistic. Some experts speculate that it may be because autism has both social and biological components.

In the wider view, Prof. Bourgeron said, “This new study demonstrates that empathy is partly genetic, but we should not lose sight of other important social factors such as early upbringing and postnatal experience.” According to Harvard’s Howard Gardner, interpersonal awareness, or being able to understand the thoughts and feelings of others, is a form of intelligence. Now we know that there are genetic influences at play. Future findings based off of this study, might lead to novel treatments for anorexia and even ASD.

Want to see how well you can read someone’s emotions through their eyes? Take a quiz here.

Related
Starts With A Bang
The Universe’s most unbreakable symmetry
The combination of charge conjugation, parity, and time-reversal symmetry is known as CPT. And it must never be broken. Ever.
13.8
The weirdness of quantum mechanics forces scientists to confront philosophy
Though quantum mechanics is an incredibly successful theory, nobody knows what it means. Scientists now must confront its philosophical implications.
Neuropsych
Why is a Starbucks loyalty rewards program making customers so angry?
The rewards price to get a free cup of hot coffee at Starbucks is going up.
Empowering growth
7 essential management training topics for every team leader
From emotional intelligence to problem solving, these management training topics will set team leaders up for success.
Thinking
What if you could rewire your brain to conquer suffering? Buddhism says you can
For Buddhists, the “Four Noble Truths” offer a path to lasting happiness.
Up Next
Mind & Brain
Pig Brain Cells May Reduce Parkinson’s in Humans
A new study suggests implanted pig cells may alleviate symptoms of Parkinson’s disease.