Before New Zealand biotech company Living Cell Technologies can be sure of what they’re seeing, they need to do some placebo testing, but they seem to have discovered something that could offer new hope to sufferers of Parkinson’s disease. It has to do with cells taken from pathogen-free pigs descended from a herd discovered in the remote sub-Antarctic Auckland Islands. Preliminary tests suggest that when the cells are implanted in people, they may alleviate symptoms of Parkinson’s. 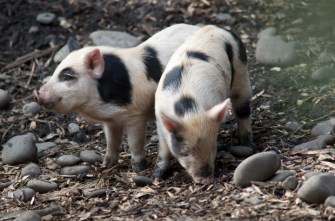 Living Cell Technologies has a product called NTCELL®, which is an seawaeed-alginate-coated capsule that contains clusters of neonatal porcine choroid plexus cells. The cells are coated with another one of the company’s products, IMMUPEL™ to protect them from attack by the immune system of subjects into which they’ve been implanted.

According to the company:

Choroid plexus cells are naturally occurring “support” cells for the brain and secrete cerebrospinal fluid (CSF), which contains a range of factors that support nerve cell functions and protective enzymes that are crucial for nerve growth and healthy functioning.

Living Cell’s Ken Taylor tells New Scientist, “It’s putting in a little neurochemical factory to promote new nerve cell growth and repair.” The hope is that they’ll help patients produce dopamine more effectively, since the problem with Parkinson’s is that it kills the cells that produce it. Earlier trials of the therapy in rats showed promise, though human testing so far has involved only four human subjects. Each of the subjects had 40 half-millimeter-wide NTCELL capsules implanted in one side of their brain, with each capsule holding about a thousand pig cells. Cells are implanted in the brain’s choroid plexus.

Eighteen months after the implantation surgery, subjects reported a significant improvement in symptoms. The treatment “Improved every rating scale in first 4 patients,” according to Living Cell.

Living Cell is a little skeptical of the results, since other studies of Parkinson’s patients suggest they’re susceptible to the placebo effect: Subjects want to believe they’re improving and so they report to researchers that they are. In this test, patients said their symptoms improved immediately after surgery. But, as University of Bristols’ Steve Gill told New Scientist, “Nerve cells don’t regrow that fast.”

Still, 18 months later, the subjects’ symptoms retained the 14-point improvement, a promising sign considering that, as Parkinson’s patients, they’d have been expected to worsen over an extended period. Gill wonders if they didn’t exaggerate their symptoms to be be included in the trial.

A second, larger, placebo-controlled trial was undertaken by Living Cell in May 2017, with 18 subjects. Up to 120 capsules were implanted in both sides of subjects’ brains this time. The results of this trial are expected in November.

Pig cells are also being tested in treatments for other diseases involving nerve-cell death, such as Alzheimer’s and Huntington’s. There is, of course, always the concern that pig cells could transfer porcine disorders to humans, but so far, at least, this hasn’t proven to be the case for diabetes treatments that depend on porcine pancreas cells.

It’s the very closest stars to us that hold the key to unlocking the possibilities for life in star systems all throughout the Universe.
Up Next
Politics & Current Affairs

Education executive Jeff Livingston  makes the case that our old higher-educational model is obsolete for our current reality.