There are some things that you presume science already knows and may be surprised to learn it doesn’t. One seemingly simple thing was resolved this week, as scientists finally put an age range on whale sharks by dating the slightly radioactive carbon-14 isotope their bones collected after Cold War atomic bomb tests.

Majestic whale sharks, the gentle giants of the shark family.

Weighing in at 9 tons (20,000 pounds) and typically growing to around 10 meters (32 feet) long, the whale shark is the largest living species of fish. Despite the name, it is not a whale, though it is the size of one. Like many kinds of whales, it filter feeds on plankton.

Many things about the whale shark have remained unknown to science; how long they can live, their mortality rate, and how exactly to determine the age of a specimen from its remains was chief among them. However, these questions are now a little closer to being settled. In a study recently published in Frontiers in Marine Science, scientists explain how they were able to date the bones of two whale sharks who met their fate earlier than they may have expected.

Like trees, whale sharks’ bones have growth rings. Scientists have known about these rings for a while, but how quickly the rings grow has been unknown. It is difficult to use them to estimate the age of a shark if you aren’t sure how much time each ring represents. 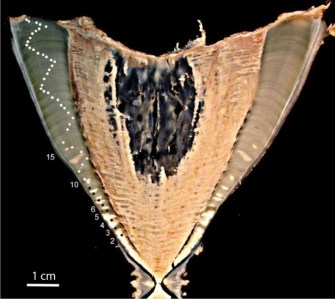 This is where carbon-14 comes in. As a result of nuclear bomb tests during the Cold War, large quantities of carbon-14 were put into the oceans. The isotope slowly made its way up the food web and into the bodies of larger animals. Knowing the yearly changes in the amount of carbon-14 in the oceans due to bomb testing, scientists merely had to compare that data with the changes seen in the sharks’ bones.

“We found that one growth ring was definitely deposited every year,” said Dr. Mark Meekan of the Australian Institute of Marine Science in Perth, a co-lead on the study. “This is very important, because if you over- or under-estimate growth rates you will inevitably end up with a management strategy that doesn’t work, and you’ll see the population crash.” This means the sharks used in this study were around 35 and 50 years old at the time of their deaths.

Working forward from there, the scientists were able conclude that the animals may have an age range of 100-150 years. “Earlier modelling studies have suggested that the largest whale sharks may live as long as 100 years,” Dr. Meekan explained in a statement. “However, although our understanding of the movements, behaviour, connectivity and distribution of whale sharks have improved dramatically over the last 10 years, basic life history traits such as age, longevity and mortality remain largely unknown. Our study shows that adult sharks can indeed attain great age and that long lifespans are probably a feature of the species. Now we have another piece of the jigsaw added.”

A “Fabric of Knowledge” To Save Our Seas

Whale sharks are an interesting species that many eco-tourists want to see. Conservation efforts for them rely on having accurate data on their longevity, mortality rate, and the age of specific animals. This information will help those managing ocean preserves keep the population stable for future generations to enjoy.

More than 90% of human faces are home to mites that live in our skin pores. These friendly guests might be merging with us.
Up Next
The Past

Scientists discovered footprints made by some of the largest creatures ever to walk the Earth.