The observed changes correspond to what Charles Darwin called the “domestication syndrome,” comprised of traits that go along with an animal’s transition from being wild, to tamed, to domesticated.

“What’s really fascinating here is that the foxes are doing this to themselves,” Parsons told the BBC. “This is the result of foxes that have decided to live near people, showing these traits that make them look more like domesticated animals.”

The researchers are not suggesting you should go out and get a fox as a house-pet just yet. But they are seeing the evolutionary process taking place that’s moving the urban foxes along the path towards becoming more like dogs and cats, explained the study’s co-author Dr. Andrew Kitchener from National Museums Scotland. 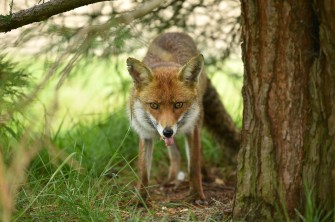 A fox beneath a tree in Greenwich park, south east London on May 14, 2020.Photo by Glyn KIRK / AFP

“Some of the basic environmental aspects that may have occurred during the initial phases of domestication for our current pets, like dogs and cats, were probably similar to the conditions in which our urban foxes and other urban animals are living today,” said Kitchener. “So, adapting to life around humans actually primes some animals for domestication.”

The specimen came from the National Museum Scotland’s collection of around 1,500 fox skulls. 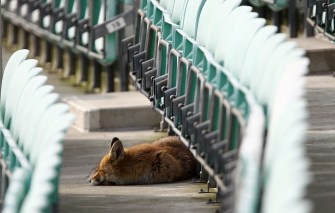 A fox at the LV County Championship, Division two match between Surrey and Derbyshire at The Brit Oval on April 9, 2010 in London, England.Photo by Clive Rose/Getty Images

The apes taught sign language didn’t understand what they were doing. They were merely “aping” their caretakers.
Up Next
Neuropsych