The Dutch city of Utrecht has set out on a new greenery initiative. Over 316 bus stop roofs were recently covered with grasses and a succulent plant called sedum. The shelters are meant to attract honey bees, bumblebees, and butterflies. Their hope is that new habitats will form and strengthen the biodiversity in the middle of the city.

Like many places in the world, the Netherlands insect population has dramatically dropped. Adding these tiny greenery patches could help foster a green urban environment and give the surrounding ecosystem all the benefits that come from having bees around.

The city believes that the green roofs will bring about a cleaner infrastructure. 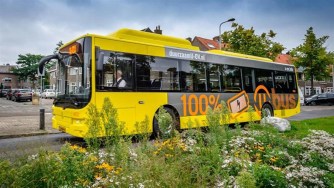 Heavy rains have been taking a toll on Utrecht’s infrastructure due to climate change. Patches of vegetative growth can help mitigate that problem to a certain extent and soak up the water. Increased greenery helps cool an area as well. With July being the hottest month on world record, European countries need to figure out better ways to keep their urban centers out of the heat.

Annelies Kieboom from Mobilane, a representative from the company behind the green roofs, stated that the tiny parks can also improve air quality. “The sedum filters the air, catches fine dust, and in this way, improves the quality of the air.

The city’s aim is to create an environment of healthy urban living. The roofs need minimal maintenance and are attended to by workers driving electric cars. People taking the bus can cool off and relax on bamboo benches.

They’re also working on rolling out 55 new electric buses by the end of the year. Planning to keep the renewable vision at all stages of the process, the electric buses will even be powered by Dutch windmill energy.

Utrecht also has incentives for homeowners to install green roofs on their houses. According to the research, this is a step forward in the right direction. Green roofs also earn credits toward a building receiving a LEED (Leadership in Environmental Energy and Design) certification. As noted, green roofs provide water control, miniature wildlife habitats, and increase urban air quality.

Bringing in bees has been found to better the environment as well, they serve an important agricultural role as pollinators.

Bees and the environment

A vast horde of bees have been dying off year after year. Bees are an integral force to local ecosystems and economies. Bees are crucial in helping the harvest of crops.

Among the many threats to wild bees, including climate change and rampant use of pesticides, habitat loss is one of the biggest factors affecting population — which is where the tiny parks come in. While there hasn’t been any scientific research into Ultrecht’s green roof plan, yet, that isn’t to say these parks couldn’t help.

Four years after the Lurie Garden opened in Chicago, Rebecca Tonietto, a biologist was surveying bees and discovered that some of the plants were harboring a native sweat bee that had never been found in Illinois before.

The research and essay titled: “The city as a refuge for insect pollinators,” found evidence that it’s beneficial for insects such as the bee to live in high density habitats with humans, where pesticides are not usually sprayed upon large swaths of land.

Surrounded by increasingly less hospitable rural and suburban landscapes, the city can become a refuge.”

Humanity’s most advanced tech still hasn’t unraveled the mysteries of the human mind. Can brain scans show us how we store memories?
▸
with
Lisa Genova
Life

Steel tires may be better for the planet and could replace rubber.
Up Next
The Present

Elizabeth Warren introduced a bill to cancel student debt — does it have any chance of passing?

Her plan to abolish most student debt has been put before Congress. But does it have any chance of passing?