Why have so many modern-day mammals evolved adaptations suited for the night? The answer might very well be dinosaurs, according to new research.

A study published in the journal Nature Ecology & Evolution suggests that the threat of dinosaurs, who ruled the world during the daytime more than 65 million years ago, encouraged mammals to only come out under the dark of night.

This idea – known as the “nocturnal bottleneck hypothesis” – has intrigued scientists for years, but it’s been difficult to prove by direct means. The new study explores the hypothesis further by analyzing the behavior patterns of 2,415 mammal species, and then using computer models to predict the behavior of their ancestors. The international team of researchers classified each species’ behavior into five categories:

Focusing on the first three categories – nocturnal, diurnal, and cathemeral – the team found that most of the ancestors of modern-day mammals were likely nocturnal, but probably switched to other activity patterns after the dinosaurs died off.

“On balance, our evidence suggests that mammals remained nocturnal throughout the Mesozoic,” the authors wrote, referring to the era also known as the Age of Reptiles, which ended about 66 million years ago. 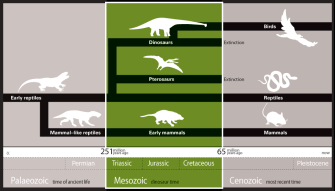 The first mammals to switch to a diurnal pattern (daytime only) appear to have been simian primates from about 52 to 33 million years ago. Primates are one of the few modern-day mammal species that have evolved key adaptations for daytime activity.

“Monkeys and apes (including humans) are the only diurnal mammals that have evolved eyes that are similar to the other diurnal animals like birds or reptiles,” study co-author Roi Maor of Tel Aviv University said to The Guardian. “Other diurnal mammals have not developed such profound adaptations.”

Although the threat of dinosaurs seems to have encouraged the small, scurrying mammals of prehistory to only come out at night, cathemeral activity — operating both during day and night — seems to have begun before the extinction began. So, why did some mammals risk being out in the light with the dinosaurs?

The researchers offered a few possibilities: these creatures were trying to avoid being eaten by nocturnal animals; they were taking advantage of relatively new flowering species of plants and the insects that liked them; or, as evidence suggests, the dinosaurs were simply beginning to die off before the massive extinction event, allowing for mammals to slowly emerge into the light of day.

Our brains believe $10 today is more tangible than $100 next year.
Life

The brain of an ancient bird offers clues to the survival of its modern-day relatives.
Up Next
Technology & Innovation