Elon Musk-led Tesla Motors unveiled a new truck yesterday – its first fully electric Tesla Semi. The slick truck has a giant battery which lets it go for 500 miles on one charge and can haul 80,000 pounds. It also comes with Enhanced Autopilot, a next-generation semiautonomous driving tech which will add automation to the truck’s braking, lane keeping and lane departure warnings.

Musk teased about the truck’s unveiling in tweets earlier in the week, saying the truck will “blow your mind clear out of your skull and into an alternate dimension.”

According to Wired, the truck features a carbon fiber cab on the outside, with special attention paid to aerodynamics. The driver seat has been moved to the middle of the cab. Two 15-inch touchscreen control most of the navigation. The battery is reinforced in case of fire or explosion.

The electric truck gives Musk an opportunity to do something concrete about the issue of climate change, which he has called “the biggest threat that humanity faces this century, except for AI” in previous interviews. As trucks are particularly toxic, making electric trucks a reality could make a direct impact on emissions.

In California, 20% of transportation-related of greenhouse emissions are due to buses and trucks. Electric truck fleets could have a significant effect on the situation. 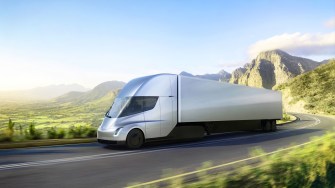 On the issue of autopilot, Musk said it will be the “standard” in every Tesla truck, adding that “this is a massive increase in safety.”

The automation can result in massive job losses in the industry, however, with Goldman Sachs predicting that up to 300,000 driving jobs per year will be lost when full automation hits. 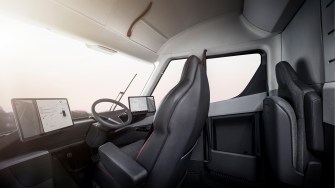 Along with the truck, Tesla also made a surprise announcement of a new sports car called Roadster. Available in 2020, it will accelerate at “world record” speed, according to Musk.CNBC reports the 0 to 60 acceleration will be in astounding 1.9 seconds.

Production of the truck is slated to start in 2019.

Related
Neuropsych
Asthma drug brings back “lost” memories
In a study involving mice, scientists used two different techniques — one optogenetic and one pharmacologic — to recover “lost” memories.
Stoicism: How to turn your sadness into strength
Chloé Valdary shares the ancient Stoic principle that can defeat modern despair.
▸
7 min
—
with
Chloé Valdary
Hard Science
3 new studies indicate a conflict at the heart of cosmology
The Universe isn’t as “clumpy” as we think it should be.
Starts With A Bang
The sober truth about finding the Universe’s first stars
The Universe certainly formed stars, at one point, for the very first time. But we haven’t found them yet. Here’s what everyone should know.
Life
Our antidepressant drugs are affecting animals and ecosystems
A toxicologist explains the impacts of antidepressants on fish — and no, they’re not getting any happier.
Up Next
Starts With A Bang
Professional Disagreement Over Galaxies Escalates Into Bullying And Harassment
No matter what the science says, there’s no excuse for cruel behavior to a colleague.Look out into the distant Universe as far as you possibly can, and you’ll come to […]