In 2009, a NASA researcher isolated a peculiar bacteria from Mono Lake in California. Mono Lake is hypersaline and rich in arsenic, making it a difficult place for life to eke out an existence with the exception of some hard-scrabbling brine shrimp, the migratory birds that feed upon them, and some very interesting extremophile bacteria.

The researcher believed that this particular bacteria, dubbed GFAJ-1, was capable of an incredible trick. All life on Earth — and consequentially, all life that humans know of — uses phosphorus in its DNA. But when GFAJ-1 had no phosphorus, it seemed able to grow using just arsenic. The closest analogy would be to say that the researchers had just discovered alien life right on Earth.

There was a flurry of excitement and activity amongst the scientific community, but it was unfortunately short-lived; further research failed to replicate the experiment, and it appeared that GFAJ-1 was simply remarkably resistant to arsenic and had been surviving on trace amounts of phosphorus that had contaminated the culture.

This episode raises a question that bothers molecular biologists and astrobiologists alike; why is life the way it is? Why couldn’t GFAJ-1 have used that arsenic molecule in place of the standard phosphorus molecule? There are plenty of hypothetical forms of life that simply couldn’t exist under the conditions on Earth, such as silicon-based life rather than our carbon-based one, but there are also many, many variations on Earth’s carbon-based life that should do fine.

These questions lead to another: What if there are indeed other forms of microbial life on Earth, unnoticed but existing in parallel with our own? This hypothetical scenario is referred to as the shadow biosphere. 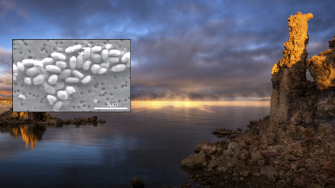 If Earth hosted not one, but two fundamentally different forms of life, it would substantially increase the odds of alien life existing out in the universe. If a shadow biosphere existed, then it would stand to reason that when a planet exists under the right conditions, life doesn’t just have a shot at emerging, it’s practically guaranteed.

But then again, this idea also seems extremely far-fetched. If a second form of life existed in parallel alongside our own, one would expect that we would have detected it by now. To that point, proponents argue that our techniques for detecting life are based on our current understanding of it. Hypothetical, alternate microbial life forms could go undetected.

It is important to note that the majority of biologists do not endorse the idea of a shadow biosphere. There is little evidence to suggest that such a biosphere exists, and it is extremely difficult to prove a negative, so we are left with assuming that ours is the only format that life takes. Still, contemplating the shadow biosphere is a useful exercise, as it may help us understand alien life. Not to mention that the shadow biosphere may in fact be real.

Another possible candidate for the shadow biosphere would be RNA-based life. Both DNA and RNA carry genetic information, and life on Earth uses both to function. Unlike DNA, RNA only has a single strand, uses the nucleobase uracil rather than thymine, and directly codes for amino acids.

Because RNA is structurally simpler than DNA, some scientists argue that predominantly RNA-based life evolved first on Earth, often referred to as the “RNA World.” Under a shadow biosphere, such life would have persisted, branching off from what would eventually become DNA-based life.

There could also be organisms with the opposite chirality to ours. Perhaps one of the most arbitrary characteristics that life on Earth exhibits is its chirality, or handedness. In molecular biology, the shape of a molecule plays a large part in its function, but some shapes are simply mirror images of the other, like our left hand is a mirror image of our right.

These molecules are functionally the same, they just need the right kind of molecular machinery to work. Life on Earth has somehow decided that left-handed amino acids make up proteins and right-handed sugars make up our DNA and RNA, but there’s no reason why this couldn’t be flipped. We may be exposed to molecular life with the opposite chirality to ours and not even know it; none of our cells could interact with a molecule using the “wrong” hand to ours.

Unfortunately, we will likely only be able to shut the book on the shadow biosphere if we find life that deviates from the formula that seems to work so well on Earth. Proving the absence of all other varieties of life on Earth is an impossible task, so we will likely be left to speculate. If, however, we do discover evidence of a shadow biosphere in some of Earth’s stranger nooks and crannies, we will have to look at life in the universe from an entirely new point of view.

Coupled with 3D printing, biomining the Moon or Mars with microbes could sustain human colonies without constant re-supply from Earth.
Life

Centuries ago, the plague forced people into quarantine for years. Isaac Newton and Galileo used the time to revolutionize the world.
13.8

Whether or not life exists elsewhere in the Universe, we can be assured of one thing: We are the only human beings in the cosmos.
Health

A small, Seattle-based study will look to see if the psychedelic can alleviate the pandemic’s mental health impact.
Up Next
The Present