Some animals waste no time developing. A baby giraffe, for example, can stand and even run from predators on its first day of life. A megapode chick can fly just hours after hatching. But human babies are late bloomers, requiring at least a couple years of care before they’re able to do much else besides stumble and cry.

This prolonged period of helplessness serves evolutionary functions, however. For one, it allows our comparatively large brains time to develop, enabling us to eventually learn complex skills, like the ability to manipulate objects with our hands. And it turns out that other primates share a similar development schedule in terms of handy abilities, called manipulative skills. 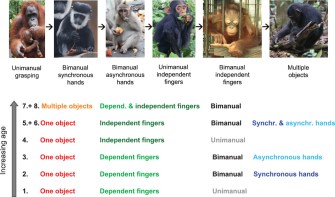 Fig. 1 Eight food manipulation categories and their order of emergence during ontogeny. Ninety-seven percent of all observed species (N = 36) and 82% of all observed individuals (N = 128) strictly followed this ontogenetic sequence.Heldstab et al.

“Our results show that the neural development follows extremely rigid patterns — even in primate species that differ greatly in other respects,” Sandra Heldstab, an evolutionary biologist in the Department of Anthropology at the University of Zurich, said in a press release.

For the study, the researchers observed 128 primates in 13 European zoos over seven years, recording more than 10,000 observations from the time the animals were born until they reached adult-level dexterity. The team found that smaller-brained primates, like lemurs, start learning simple motor skills at an earlier age than larger-brained primates, like chimpanzees.

But the wait pays off for larger-brained primates: They’re eventually able to perform more complex tasks with their hands, like using tools, or moving both hands simultaneously to move multiple objects.

“It is no coincidence that we humans are so good at using our hands and using tools, our large brains made it possible,” Heldstab said. “A big brain equals great dexterity.”

It seems inefficient that primates, like chimps and humans, undergo such a long period of learning and dependency. But the researchers suggest this represents a fitness tradeoff: primate parents and children spend more time on development, but it leads to complex skills that help them get more food, and survive longer. In other words, animals don’t evolve to perform complex manipulative tasks unless it significantly prolongs lifespan. 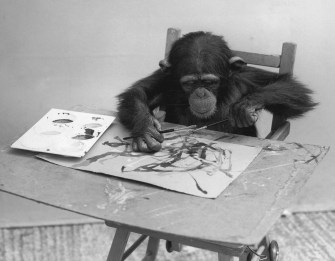 So, what does this mean for the evolution of other animals? The researchers say their findings imply that if a species is going to make and use tools, it needs to have “reached a sufficiently slow life history pace to permit such a change in their foraging niche.” In other words, the baby giraffe that hits the ground running might be good at escaping predators, but don’t expect it to do something like build a primitive fishing rod to “fish” for algae.

“Our study shows once again that in the course of evolution, only mammals that live a long time and have enough time to learn were able to develop a large brain and complex fine motor skills including the ability to use tools,” Heldstab said. “This makes it clear why so few species could follow our path and why humans could become the most technologically accomplished organism on this planet.”

Tags
animalsapesbiologybrainevolutionlearningmind
In this article
animalsapesbiologybrainevolutionlearningmind
Related
Thinking
Visual thinking: How to understand the inner lives of animals
Humans are good visual thinkers, too, but we tend to privilege verbal thinking.
Life
Scientists use CRISPR to insert an alligator gene into a catfish
Disease kills off 40% of farmed catfish. This gene protects them.
13.8
Why the origin of life and the Universe itself might be forever unknowable
There might be a hard limit to our knowledge of the Universe.
Hard Science
200 years of exploring Antarctica
What we’ve learning from the world’s coldest, most forbidding, and most peaceful continent.
Strange Maps
The great European house cat migration
Ancient bones reveal that domesticated felines were at home in Pre-Neolithic Poland around 8,000 years ago.
Up Next
Life
Scientists have revived 100-million-year-old marine microbes
In one of the ocean’s most lifeless places, scientists discover and resuscitate ancient organisms.