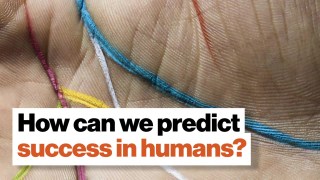 Michio Kaku explains the three main sections of the human brain and the trait that he believes to be a key indicator of success in life.
▸
5 min
—
with
Michio Kaku

So what is it that makes humans different from animals? And how is it related to success as a human? It's the ability to see the future, to see the future in all its messiness, to be able to re-create scenarios of the future which are realistic.

Now, let's go to a psychologist and ask him a simple question: Is there a test that correlates children with success in life? That's a big question. Success in life and childhood—is there a test that you can perform? It's not perfect, of course. But yeah, there is a test that's been done around the world. You test kids, and a few decades later, you try to find out if they're successful or not.

And you find that, yes, there's one characteristic that does seem to correlate with success in life, lower divorce rate, higher income, higher social status. What is that one characteristic? It's measured by the marshmallow test. The marshmallow test—you give children the option of eating a marshmallow now or two marshmallows a few hours later. And then you follow these kids for decades in different countries. Now, it's not perfect, of course. But you'll find that there is a measurable correlation.

Now, let's do a science experiment that all of us can perform. If you've graduated from school, and you meet your friends years later, like at a reunion, mentally, you ask yourself a simple question. Where are my friends now? After so many years, I haven't seen them. I think maybe they're successful. Or I know this guy. This guy's a loser. He's not going to go anywhere in the world.

And you meet them. And yeah, you make some mistakes. But I found that, when I go to my reunions, yeah, the people I thought would be successful became successful. And the ones I thought took shortcuts, yeah, they took shortcuts in life. And so that's why I think the measure of success is seeing the future, that is, running simulations of the future over and over again, day-dreaming: Should I go to college? Should I get a PhD? Should I become this? Should I do that? Working out all the different scenarios, versus the shortcut: I can cut corners. I can steal here. I can fudge this. I could lie about that. That, I think, is the criterion for success in life.

How are implicit biases holding us back?