A microscopic image of a coccolithophore, a kind of calcifying plankton. The disc-shaped objects surrounding the coccolithophore are its calcium carbonate plates.

For the majority of multicellular life’s 600-million-year history, the evolution of oceanic life was driven by dramatic swings in the climate and oceanic chemistry. But a new study published in Nature Geoscience revealed that starting 170 million years ago, that evolution has been instead driven by factors like the relationships between predators and prey. Strangely enough, this shift has to do with how much chalk covered the sea floor.

“Today,” said Ph.D candidate and lead author Kilian Eichenseer in a statement, “huge areas of the ocean floor are covered with the equivalent of chalk, made up of microscopic organisms that rose to dominance in the middle of the Jurassic period.”

The reason why this chalky floor could change the course of the ocean’s evolutionary history is because of its influence on shell-building creatures. Oceanic life makes its shells out of calcium carbonate, which comes in two primary flavors: calcite or aragonite. Though they are chemically identical, these minerals of calcium carbonate have different atomic structures, and they become more or less common depending on the ocean’s conditions. Specifically, the ratio of magnesium to calcium in the oceans determines whether the ocean contains more calcite or more aragonite. If there is more magnesium relative to calcium, then aragonite has an easier time forming than calcite.

Depending on the predominant conditions, the Earth’s oceans have cycled in and out of aragonite and calcite seas over the course of millions of years. Today, we have an aragonite sea. As these different regimes cycled in and out, so too were different kinds of shell-building creatures. Some preferred to build aragonite shells, but these were more difficult to construct in a calcite sea. Some preferred calcite shells, which would have been difficult to build in an aragonite sea.

The researchers confirmed this by analyzing a massive data set of 400,000 marine fossils dating from between 10,000 BC to 500 million years ago. Based on this analysis, the researchers were able to identify when the seas were mostly aragonite and mostly calcite as well as confirm that the marine animals who flourished during these periods tended to favor mostly aragonite or calcite shells. However, about 170 million years ago, something changed. 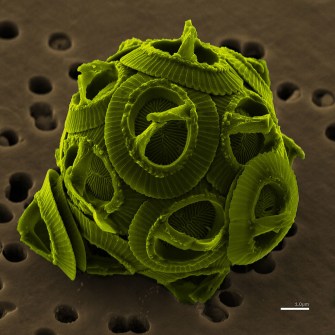 A microscopic image of a coccolithophore, a kind of calcifying plankton. The disc-shaped objects surrounding the coccolithophore are its calcium carbonate plates.

This massive spread of calcifying life helped contribute to the blanket of chalk over the ocean floor. This might not seem too significant: after all, how could the production of more calcium carbonate help other animals building calcium carbonate shells? Eichenseer explains:

“The chalky mass helps to balance out the acidity of the ocean, and, with that balance in place, organisms are less at the mercy of short-term perturbations of ocean chemistry than they might have been previously. It is easier to secrete a shell, regardless of its mineralogy, if the ocean chemistry is stable.”

Specifically, the excess calcium carbonate worked to counterbalance fluctuations in atmospheric carbon dioxide. As the level of carbon dioxide in the air increases, it also increases the carbon dioxide in the ocean. The difference is that in the ocean, carbon dioxide quickly transforms into carbonic acid. This eats away at shells, making it more difficult for shell-building creatures and especially difficult for shell-building creatures who were out of sync with the sea at the time. A creature that makes an aragonite shell would stand a better chance at surviving in a calcite sea without the added burden of dealing with carbonic acid.

As a result, diversity exploded. The environment could support more active shell-building creatures, which in turn could serve as a food source for other predators. Oceanic chemistry became less important for emerging life than its ability to seek out prey or evade predators. Today, we may be overloading the buffering system that calcifying plankton built for us. It could be that oceanic life adapts to an entirely new regime over the next few million years.

Tags
biodiversitychemistryevolutionmarine biologyoceans
In this article
biodiversitychemistryevolutionmarine biologyoceans
Related
The Present
The “maritime Indiana Jones” who salvages shipwrecks now wants to tow icebergs
Simple physics makes hauling vast ice chunks thousands of miles fiendishly difficult — but not impossible.
The Past
How the death of alchemy gave birth to modern science
Far from practicing witchcraft, the experimentation of medieval alchemists helped bring about the Scientific Revolution.
13.8
Why the origin of life and the Universe itself might be forever unknowable
There might be a hard limit to our knowledge of the Universe.
The Present
Top 10 most popular stories on Big Think in 2022
These were the stories you clicked on the most.
Hard Science
What dead whales can teach us about finding aliens on Mars
Dead whales inspire a way to find extraterrestrial life on Mars.
Up Next
Health
The market for wellness is more about capitalism than prolonging life
In Natural Causes, journalist Barbara Ehrenreich questions our obsession with wellness.