Fans of the “lifestyle” website Goop were recently disappointed by the company’s U.K. wellness summit. Apparently, the $5,700 entry price did not match the hype. Instead of offering credible post-summit customer service to deal with the blowback, Goop’s representative claims the “true value” of the summit was more than $8,000.

In other words, Goopies should be grateful for the bargain.

Gwyneth Paltrow’s oft-criticized company is an easy target. Day after day, the website churns out sciencey articles — that is, posts that state “science says” without any actual science behind the pushed claims. The replication problem in clinical trials is well known: results from one study are not repeatable. Yet companies such as Goop in particular, and the wellness industry as a whole, tend to find small sample sizes with questionable results and run with it.

Whether marketing the hottest “ancient healing herb” or pimping nootropics for brain optimization, the underlying catalyst for the multi-billion dollar wellness market is truly ancient: the fear of death. That much was true when Ernest Becker won the Pulitzer for making such a claim in 1973, and it is equally true when Barbara Ehrenreich published Natural Causes: An Epidemic of Wellness, The Certainty of Dying, and Killing Ourselves to Live Longer last year.

Ehrenreich wears her muckraking badge proudly. The author of 21 books, she wrote about living on minimum wage in the service industry in her 2001 book, Nickel and Dimed. For Natural Causes, she puts her Ph.D. in cell biology to use by exposing the façade the wellness industry uses to rake in massive profits.

Having successfully battled breast cancer, Ehrenreich notes that she’s sworn off annual physical exams and the battery of tests that go along with it. At 77, she’s just about reached the average life expectancy of American women. She’s ready to die when her time comes and has no further plans on extending her time here. Her contention isn’t with medicine, but the profit-making nature of its purveyors:

“How is a doctor — or hospital or drug company — to make money from essentially healthy patients? By subjecting them to tests and examinations that, in sufficient quantity, are bound to detect something wrong or at least worthy of follow-up.”

‘I am old enough to die’: Barbara Ehrenreich questions our longevity obsession

‘I am old enough to die’: Barbara Ehrenreich questions our longevity obsession

The small percentage of early detection successes does is not worth the massive costs of unnecessary tests, many of which lead to treatments that do more harm than good. Despite the seemingly good intentions of regular PSA screenings, she writes that there has been no overall decrease in mortality since that public health campaign began in the late ’80s.

What’s worse, the radiation and hormonal therapies attached to over-diagnosis leads to actual problems, such as cardiovascular disease and incontinence. A similar problem occurs with colonoscopies: at a cost of up to $10,000, they’ve been found no more effective at detecting cancerous polyps than the examination of feces for traces of blood.

Health care costs Americans $3.4 trillion. Hundreds of billions of dollars are spent in the last days and weeks of a patient’s life in what proves to be a futile attempt. Here Ehrenreich’s academic training shines. While the wellness industrial complex seeks out means for lengthening telomeres, she focuses on an overlooked cell: macrophages, “cheerleaders on the side of death.”

The focus of modern wellness is holism; Ehrenreich considers our bodies differently. We’re not a single system but rather a number of confederations, some of which want to wrest control from others. Cancer cells (as Siddhartha Mukherjee has so eloquently written) are not foreign invaders; they’re an inherent part of our biology. Should we not try to stop their incessant growth? Of course not. We need to understand them for what they are, however.

Ehrenreich spends chapters explaining the (sometimes) murderous plight of macrophages. They play life-threatening and -ending roles in many inflammatory processes, including cancer, as well as acne and arthritis, all well beyond the fold of conscious control. She even goes as far as to note that these cells have agency:

“Second by second, both the individual cell and the conglomeration of cells we call a ‘human’ are doing the same thing: processing incoming data and making decisions.” 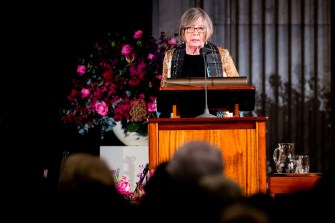 Writer and journalist Barbara Ehrenreich on November 27, 2018 in Amsterdam, Netherlands, where she was awarded the Erasmus Prize 2018. Photo credit: Patrick van Katwijk / WireImage

Every day, this body that I usually consider a unified “I” is really a battleground for competing forces. Humans assign agency to inanimate forces; we offer it freely to other species. At a cellular level, however, there is an agency we are not aware of. Instead of fighting it, understand it. Ehrenreich suggests the cultivation of an important quality to aid in this quest: humility.

“For all of our vaunted intelligence and ‘complexity,’ we are not the sole authors of our destinies or of anything else. You may exercise diligently, eat a medically fashionable diet, and still die of a sting from an irritated bee. You may be a slim, toned paragon of wellness, and still a macrophage within your body may decide to throw in its lot with an incipient tumor.”

Ehrenreich does not criticize staying healthy. She discusses her own struggles and triumphs with gym culture; even still, she exercises regularly. Her problem is treating the human body as a clumsy burden to be overcome; equally, as an infinitely wise biological organism primed for optimization. Many of our cells — what “I” is composed of — have no interest in sustaining our lives. A number of them even bet on and actively instigate our destruction.

Beyond her stretching regimen and time on exercise machines, Ehrenreich writes, “I pretty much eat what I want and indulge my vices, from butter to wine. Life is too short to forgo these pleasures, and would be far too long without them.”

Personally, I’m on team Grace Jones, who, until last month, was Britain’s oldest woman. Shortly before passing at 112, she revealed the true secret of longevity: a nightly shot of whiskey. Futurists can swallow copious amounts of resveratrol while their acolytes chug Soylent for optimal. . . indigestion? I’ll place my bets on something a bit more ancient, like fermented grain mash.

Leaders in the wellness industry thrive at the top of Maslow’s pyramid while their acolytes sell questionable goods down the steep divide. Those at the bottom shrug their shoulders at the scent of privilege. Culturally, we do need to spend more time engaging in healthier behaviors. We just have to educate ourselves to better understand the parameters. That begins, as Ehrenreich concludes, with redefining the place we are all assured to end up:

“You can think of death bitterly or with resignation, as a tragic interruption of your life, and take every possible measure to postpone it. Or, more realistically, you can think of life as an interruption of an eternity of personal nonexistence, and seize it as a brief opportunity to observe and interact with the living, ever-surprising world around us.”

How the media stokes compassion. And why it’s a double-edged sword.

Compassion is one of several news values that determine if a story is published.