We typically refer to grains of sand as uncountable tiny bits of rock whose most interesting characteristic is just how many of them there are. Like stars in the sky. We do them a disservice. Even the Oxford Dictionary defines them nearly as “A loose granular substance, typically pale yellowish brown…”

Scientist, author, teacher and photographer Gary Greenberg knows better. This doctor of developmental biology invents and patents high-definition, three-dimensional light microscopes. He’s the founder of Edge-3D, for which he develops innovative 3D imaging devices — some of his technology is currently in use on the International Space Station.

Since 2011, Greenberg’s been photographing everyday objects whose beauty and complexity is revealed only when they’re magnified. His photographs of sand reveal a world of fascinating shapes and colors which we had no idea existed. High-quality prints of his images are available for sale on his website.

Greenberg explains what we see in each of photo. (We’ve edited his text slightly.) 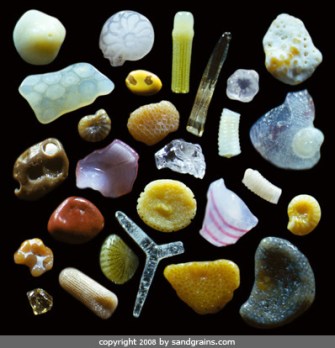 This image is a handful of sand grains selected from a beach in Maui and arranged onto a black background. The colors and shapes of these tiny grains of sand are surprisingly different and astonishingly beautiful, each with its own individual character. 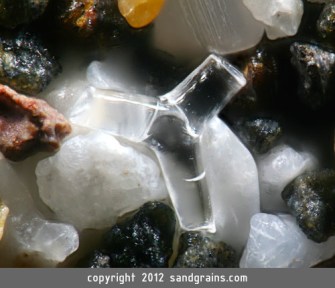 Elegant beauty in a sponge spicule fragment from a glassy sponge found in sand from Hamoa Beach, Maui, Hawaii. 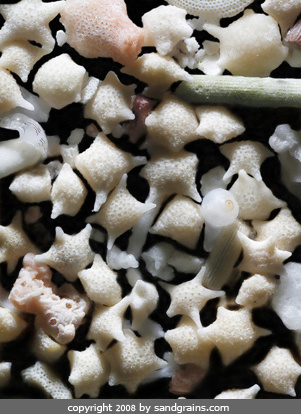 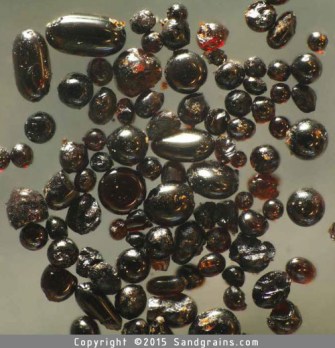 Apollo 17 astronauts discovered this “orange soil” on the rim of Shorty Crater in the Taurus Littrow Valley. These tiny, glassy orange spherules originate from a fire-fountain volcano that erupted over 3.8 billion years ago. 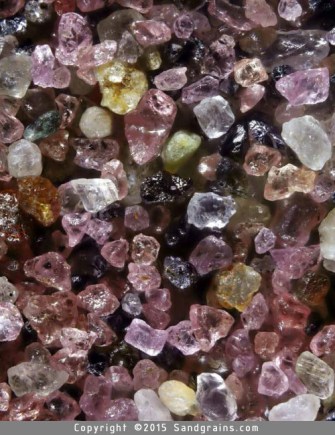 These come from Plum Island, Rowley, Massachusetts, the northernmost barrier island in the United States. Its beach gets its pink color from garnets in the sand. Denser than most other sand grains, they get left behind as the waves sweep less dense material away. 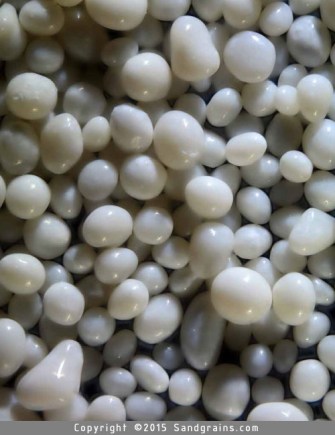 There are three areas in the world where ooids are created from tidal currents that keep mineral grains in constant motion. This results in carbonate precipitation forming around them. One of these locations is the Great Bahama Bank — these come from Joulter Cays, located about ten miles north of Andros Island in the Bahamas. 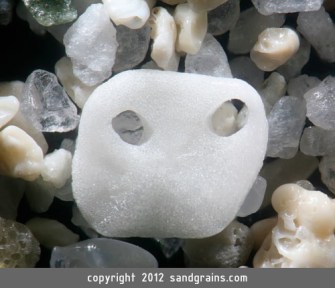 A single grain of sand from the island of Corsica, France, looks like a mask. Or an Angry Birds pig snout. 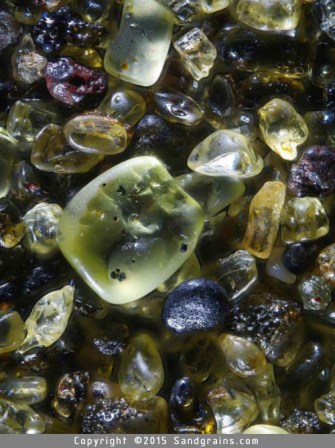 These grains are from South Point on the Big Island of Hawaii. The translucent green grains are olivine — at South Point on Mauna Loa’s southwest rift, the pounding surf erodes a forty-nine-thousand-year-old volcanic cinder cone made of olivine. The deep-red grain (upper left) is volcanic rock. 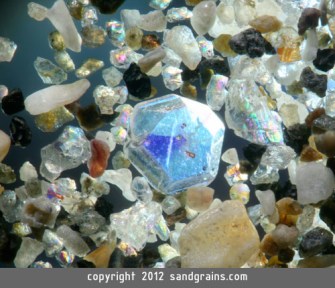 9. A tiny sapphire in Japanese sand

There appears to be sapphire crystal in this sand from Japan. Who knows what you’ll find under your feet if you look?

Surrounding Earth is a powerful magnetic field created by swirling liquid iron in the planet’s core. Earth’s magnetic field may be nearly as old as the Earth itself – and […]
The Future

Up Next
Think Again Podcasts

The 8th century AD was a tough time to be a genius from a poor family in China. Poet and novelist Ha Jin on the tortured life of the legendary drunken poet Li Bai. Also: panpsychism, the value of idleness, and humanities education in America today.