When oceanographers Lauren and Simon Freeman, a couple who work with the U.S. Naval Undersea Warfare Center in Rhode Island, first mentioned what they’d heard to others, the response was not exactly positive. They’d been listening to sounds they were certain had been made by marine macroalgae covering underwater coral reefs in Hawaii. Simon recalls, “We were told the sound was from snapping shrimp, end of story.” But, listening at a few locations, they saw a correlation between the amount of sound and the quantity of algae. Further research has pretty much confirmed their hunch, and they’ve introduced a new avenue for marine acoustic ecology: Assessing the health of reefs according to the sounds they make. 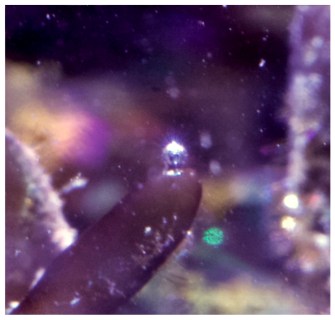 An oxygen bubble about to ping and float upward. (Freeman, et al)

Back up. Sounds the algae make?

Algae, like plants on dry land, convert sunlight and carbon dioxide to energy via photosynthesis. The process releases tiny bubbles of oxygen to the surface. As each bubble lets go of the plant that produced it, there’s a little “ping.” As the Freemans’ research states, “Many such bubbles create a large, distributed sound source over the sea floor.” This 2 kHz – 20kHz hiss made of pings is what the Freemans have been hearing and recording from reefs.

There’s actually quite a lot of acoustic goings-on underwater, between animal noises, human noises, waves, other bubbles and so on. Acoustic ecologist Erica Staaterman, not involved in the Freemans’ research, says, “When I put a recorder in the water, I’m usually surprised by some cool new fish sound that I’ve never heard before. There’s so much to discover.”

As a result, recording and listening to algae in the wild is challenging.

To verify that the telltale pings were indeed coming from algae and not some other source, the Freemans set up a tank containing the invasive Hawaiian algae Gracilaria salicornia — no fish or crustaceans welcome. Upon listening, they heard the same high-pitched noise they’d witnessed at degraded reefs that no longer supported fish or other animals. 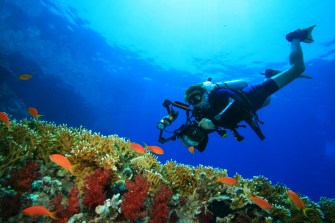 The value of this discovery

“Right now,” says Simon, “reefs are evaluated visually by divers.” Thorough research is an expensive and time-intensive endeavor, and findings are limited to what divers can see. The Freemans are hopeful that acoustic analysis of these environments will eventually reveal much more about reefs’ conditions.

“In the future, it might be possible to quickly listen to a coral reef soundscape, perhaps by using an autonomous vehicle, and evaluate how it may have changed from the previous year.”

Even now, a snapshot of a reef’s algae cover can be quickly gleaned from its sound. (Other researchers are acoustically monitoring beds of sea grass in Australia.)

As Staaterman sees it, “Making these kind of links between bioacoustics and biodiversity is an exciting field with a lot of promise.”

Symmetrical objects are less complex than non-symmetrical ones. Perhaps evolution acts as an algorithm with a bias toward simplicity.
Life

What plants can teach us about human suffering

Plants are very sensitive to touch, with research showing that touching a plant can change its genome and launch a cascade of plant hormones.
Hard Science

Multiple lines of evidence — physical, chemical, and biological — must converge for scientists to conclude that alien life has been found.
Life

How Venus flytraps give scientists insights on consciousness and anesthesia

Anesthesia causes animals and humans to lose consciousness. A study found it has a similar effect on Venus flytraps.
Up Next
The Present

Explore McLuhan’s theory on print culture and its influential hold over civilization.