A few months ago, James Hamblin made a splash when announcing he hadn’t showered or used much soap in five years. The physician, Yale public health lecturer, and staff writer at The Atlantic experimented on himself as research for his latest book, “Clean: The New Science of Skin.”

Hygiene rituals are as old as recorded civilization. While Muslims and Hindus created elaborate cleaning rituals, European Christians thought bathing increased your chances of falling ill thanks to miasma theory. For centuries, changing your linen shirt supposedly bestowed cleanliness—not soap and water. Many Christians during this era only had one bath in their entire lives: baptism.

While easy to shake your head in disbelief, Hamblin points out that many current hygiene and skincare rituals have moved us too far in the opposite direction. You certainly want to wash more than yearly, yet our expensive rituals may be more harmful than helpful.

Modern hygiene and skincare is also a time suck. As Hamblin points out, if you spend a half-hour showering and applying products every day, you’ll devote over two years to showering-related activities over the course of a century-long life.

In his previous book, “If Our Bodies Could Talk,” Hamblin investigated numerous body myths. In “Clean,” he focuses on our largest organ. Skin is an environment unto itself. What follows are six important lessons in his book, ranging from hygiene practices to capitalistic greed.

As Hamblin notes in the introduction, abandoning soap doesn’t apply to washing your hands, especially during a pandemic. As a physician, he performs this ritual multiple times a day.

In the quest to protect our children against bacteria, we might inadvertently create lifelong allergies. An uptick in peanut allergies is indicative of this trend. Our skin is the first line of defense against disease, and it knows how to protect itself. In fact, the organisms and bacteria that live on our skin are doing important work; the more we wash them away, the more susceptible we become to foreign invaders.

Nut allergies might only be one consequence of overwashing. Allergic rhinitis, asthma, and eczema might in part be caused (or provoked) by too many antibacterial soaps (or soap in general). As Hamblin writes, “Soaps and astringents meant to make us drier and less oily also remove the sebum on which microbes feed.”

Your skin is crawling with mites

Speaking of foreign invaders, skin science verifies an old Buddhist idea: there is no self. As Hamblin puts it, “Self and other is less of a dichotomy than a continuum.” In fact, “you” are a collection of organisms and bacteria, including Demodex. A half-millimeter in length, these “demon arachnids” are colorless and boast four pairs of legs, which they use to burrow into the skin on our face.

Yes, all of our faces.

While these mites were originally discovered in 1841, it wasn’t until 2014 that a group of researchers in North Carolina used DNA sequencing to understand their impact. Though you might recoil at the suggestion, it turns out that these critters potentially act as natural exfoliants. While housing too many of these mites results in skin disease, your face is their home. If not for them you might be even more susceptible to breakouts and infections.

Soap is chemically simple. Combine fat and alkali to create surfactant molecules. The fat can be animal- or plant-based—three fatty acids and a glycerin molecule create a triglyceride. Combine this mix with potash or lye, apply heat and pressure, and wait for the fatty acids to rush away from the glycerin. Potassium or sodium binds to fatty acids. That’s soap.

You actually pay for scent and packaging. In 1790, the first patent in history was approved for an ash processing method that produced soap. It wasn’t an immediate hit; the balance was off. Too much lye resulted in a lot of burnt skin. A century passed before companies convinced Americans regular washing was necessary. Thanks to ingenious marketing—we still have radio-inspired “soap operas” today, though barely—soap became a must-have. A luxury became a common good.

As with everything capitalism, a little doesn’t generate much revenue. Marketers convinced the public that a lot was needed. As Hamblin phrases it, “Capitalism sells nothing so effectively as status. And if a little bit was good, a lot would be better.” Soap infected mainstream consciousness. Soon, we needed a lot of everything, all thanks to simple chemistry. 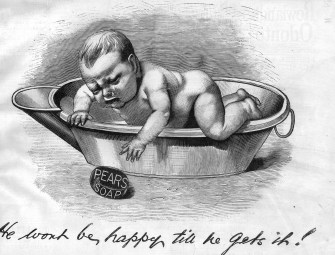 A little baby is reaching out of a bath tub to get at a tablet of Pear’s soap. The drawing is entitled ‘He won’t be happy till he gets it’! (1888)Photo by Hulton Archive/Getty Images

Hamblin tried another project for this book: he launched a skincare line. One day he went to Whole Foods and purchased raw ingredients: jojoba oil, collagen, shea butter, a few other things. After mixing them in his kitchen, he ordered glass jars and labels from Amazon. In total, he spent $150 (which included his company website) to launch Brunson + Sterling. He then posted two-ounce jars of Gentleman’s Cream for $200 (on sale from $300!).

Hamblin didn’t sell any jars, but that wasn’t the point. At an expo, he noticed one-ounce jars of SkinCeuticals’s C E Ferulic selling for $166, even though that topical acid is no more effective at improving health than eating an orange. Collagen is another hype machine. Drinking collagen does nothing for your skin as it’s broken down by enzymes in your digestive tract. Even still, plenty of companies claim it gives you glowing skin even though the charge is rubbish.

Even more incredibly, Hamblin didn’t have to report any ingredients to the FDA. He also didn’t need to note its effects or provide evidence of safety. He simply needed to apply for a business license. The FDA can’t even make him (or anyone) recall products. The government’s safety system relies on a code of honor—and there are plenty of businesses that are less than honorable.

Marketing and hype. Thanks, soap.

The ongoing joke about the happiness one derives from finding Clorox wipes in the supermarket will be with us for some time to come, as the CEO announced they won’t have enough supply until 2021. That said, do we need to Clorox everything? Probably not, Hamblin suggests. In fact, for Clorox to work, you have to leave it on the surface for about 10 minutes.

“The product isn’t ‘killing 99.9% of germs’ in the way that anyone actually uses it—a quick wipe-down.”

Hamblin suggests regularly wiping down your countertop with soap and water. Regularly killing germs isn’t the healthiest practice. Similar to antibiotics, overuse makes cleaning products ineffective. Hamblin continues, “some chronic conditions seem to be fueled by the fact that so many of us are now not being exposed to enough of the world.”

The takeaway: read beyond what’s posted in bright shiny letters on the cover of cleaning products. And consider using them less than you might think you need.

The soap advertisements that kicked off modern marketing relied on one concept: B.O. We think of body odor as a given, but that too is an invention. Our feet “smell” thanks to Bacillus subtilis. This bacteria has potent antifungal properties. Shoes weren’t available for most of history, a period in which smelly feet bestowed a strong evolutionary trait. As Hamblin writes, we didn’t evolve to smell, we evolved in harmony with protective microbes that we just happen to find unpleasant.

While a number of players in the wellness and skincare industries likely have good intentions, so much of what is sold is unnecessary, and even damaging. The marketing machine makes us feel “less than” in order to sell us products that complete us. As Hamblin concludes, evidence-based companies would take an opposite approach to skincare and hygiene: less is more. As that will never produce million-dollar companies, we continue to sacrifice health in the name of branding.

Tags
environmentevolutionhealthhygienemicrobessanitation
In this article
environmentevolutionhealthhygienemicrobessanitation
Related
The Present
Climate change is altering the chemistry of wine
Smoke taint from wildfires is gross, even to wine amateurs.
Life
Our antidepressant drugs are affecting animals and ecosystems
A toxicologist explains the impacts of antidepressants on fish — and no, they’re not getting any happier.
Life
Scientists use CRISPR to insert an alligator gene into a catfish
Disease kills off 40% of farmed catfish. This gene protects them.
13.8
Why the origin of life and the Universe itself might be forever unknowable
There might be a hard limit to our knowledge of the Universe.
Hard Science
200 years of exploring Antarctica
What we’ve learning from the world’s coldest, most forbidding, and most peaceful continent.
Up Next
Starts With A Bang
How To View Fragments Of Halley’s Comet In This Week’s Night Sky
Halley’s comet only visits every ~76 years, but its meteors arrive twice each year.The most famous comet of all — Halley’s comet — returns to our inner Solar System every ~76 years.Halley’s comet made its […]