To spare animals unnecessary pain and suffering, a German circus has replaced its real animals with stunningly realistic holograms.

The 40-year-old German performance group Circus Roncalli began phasing out animals in the 1990s, but recently retired all live animals in favor of sophisticated holograms displayed in a traditional circular ring. To display the holograms, the circus uses laser projectors and specialized lenses that allow all audience members around the 105-foot-wide ring to see the spectral creatures.

Some spectators said it reminded them of the traditional circus.

“I thought the hologram at the beginning was really great,” Janine Kunze, a German actress, said in a video. “You actually remember the circus, especially Roncalli, with horses and dogs, they always used to be part of it, and I think they really included it well. Also, in the beginning when they told the story in a new kind of way.”

Circus founder Bernhard Paul reportedly spent more than $500,000 to build and polish the hologram show, which has been seen by more than 600,000 people in the past year. The show stars a variety of (real-life) clowns and artists who incorporate the holographic animals into their performances.

Well this is incredible @CircusRoncalli thank you so much for your compassion and ingenuity #holograms #animalrights #AnimalCruelty #veganhttps://www.thedodo.com/in-the-wild/austrian-circus-holograph-animals …

“This is the future of circus — a performance everyone can enjoy and for which intelligent, sentient beings are not used and depicted as objects of entertainment,” Jan Creamer, president of Animal Defenders International, told The Dodo.

The new technology could help sustain an old-fashioned institution.

“Unfortunately, the ‘old’ circus has gotten a bit dusty, but this is how the circus can remain alive,” said German TV anchor Max Schautzer in a video. 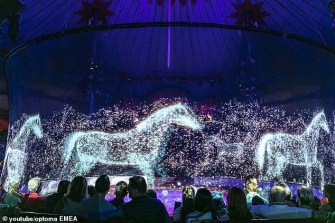 A ‘trend’ in banning circus animals

Circus animals can lead rough lives. Usually raised in captivity, they’re trained — sometimes violently — to do strenuous and unnatural tricks, and many are hauled on long-distance trips where they’re forced to perform in strange venues.

“In order to stay profitable, circuses must tour so intensely,” Jon Harmon, chief of staff for Cincinnati Councilman Chris Seelbach, told the Cincinnati Enquirer. “The moment the show is over animals are returned to their cages, which are so small, and put on a train and are traveling so long that they go out and do the show and go right back into the cage.”

Because of these cruel conditions, Cincinnati recently voted to ban exotic animals from circus performances, joining the likes of New Jersey, Hawaii, and California.

“Banning wild animals in circuses is right on trend with what’s going on around the country,” Rachel Mathews, of PETA, told Cincinnati’s WKRC.

Hint: It wasn’t always an asteroid.
The Present

Americans on average consumed about 58 pounds of beef and veal in 2019 – compared with a global average of 14 pounds.
The Past

Rock art in northern Australia depicts marsupial lions, giant kangaroos, and other megafauna that populated the Land Down Under long ago.
Up Next
The Present

Are we confusing money with well-being? New Zealand’s leaders believe so.

New Zealand’s recent budget policy puts the health and well-being of its citizens over economic growth.