Spending time in nature can bring you well-established health benefits, from lowered anxiety and depression, to reduced blood pressure and a stronger immune system. But how nature produces these effects remains unclear. Is it the awe you feel hiking through a centuries-old forest? Time spent away from screens? The physical exercise?

Recent research adds a new dimension to scientists’ understanding of how nature impacts wellbeing. The study, published in the Journal of Environmental Psychology, found that people who watched high-definition nature programs on TV or in virtual reality reported lower levels of boredom and other negative emotions.

For the study, researchers at the University of Exeter asked 96 participants to watch a video of a person describing their job at an office supply company. This was done to induce boredom.

The participants then watched or interacted with a nature program about a coral reef (which includes several scenes from the BBC’s “Blue Planet II” series) under one of three randomly assigned conditions: 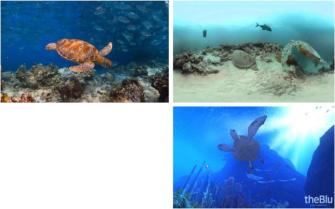 The results showed that watching the nature program under all three conditions lowered negative affect, including emotions like boredom and sadness. But only the group who experienced the program in interactive VR reported a boost in mood, and feelings of being more connected to nature.

“Our results show that simply watching nature on TV can help to lift people’s mood and combat boredom,” lead researcher Nicky Yeo told University of Exeter News. “With people around the world facing limited access to outdoor environments because of COVID-19 quarantines, this study suggests that nature programmes might offer an accessible way for populations to benefit from a ‘dose’ of digital nature.”

“Dose” is probably a keyword: The researchers didn’t compare the benefits of experiencing nature via TV or VR to experiencing it in person. But even beyond the pandemic, the findings suggest that experiencing nature via virtual reality could help people improve their mental wellbeing — a tool that could prove especially useful for people who don’t live near natural environments.

“Virtual reality could help us to boost the wellbeing of people who can’t readily access the natural world, such as those in hospital or in long term care,” co-author Mathew White told University of Exeter News. “But it might also help to encourage a deeper connection to nature in healthy populations, a mechanism which can foster more pro-environmental behaviours and prompt people to protect and preserve nature in the real world.”

High-end VR headsets remain prohibitively costly for many consumers. One of the cheapest models, the Oculus Quest 2, costs $300, while more advanced headsets can run upward of $1,000. Still, you can buy barebones devices, like Google Cardboard, for about $10. These don’t enable you to engage in fully interactive VR applications, but you could use them to view 360-degree virtual reality nature videos on YouTube.

Break into London Zoo? Illegal, but it would improve the London Circle Walk
Smart Skills

A clever neuroscience experiment shows that the “other-race effect” is likely due to a lack of experience and perceptual expertise rather than racism.
Up Next
Neuropsych

How confident are you in making decisions?

New research pinpoints the neurons responsible for your choices.