Somewhere between four and six percent of all flowering plants use some form of deception to lure in pollinators. For instance, they can appear to be a source of food or even a potential mate. The pollinators, being unable to detect the illusion, are drawn in and rewarded with little more than a dusting of pollen. Research into the deceptive nature of these plants and how they evolved isongoing.

One of these studies, recently published inFrontiers in Ecology and Evolution, sheds light on the deception strategy used by the plant Aristolochia microstoma. Uniquely, this flower lures pollinating insects by emitting the stench of dead invertebrates.

Insects head toward the smell of other dead insects 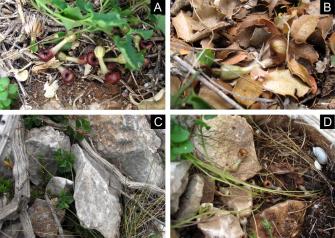 A. microstoma is a purple-brown flower found in Greece. It typically blooms close to the ground, as seen in the above image. This is unusual, as most Aristolochia species have bold and easily seen flowers well above the ground. Additionally, this flower tends to be horizontally oriented, as opposed to the more vertical structure of similar species’ flowers. A. microstoma is known to smell like decay, often to the displeasure of humans walking near it.

Pollinators stumble into the flower and — not unlike Hotel California — find themselves unable to leave. Their movements pollinate the plant. Later, they are covered in pollen from the male part of the flower before being released. The cycle then repeats as the insects fall for the same tricksagain.

To learn more about the flower’s strange traits and how that relates to its pollination, the authors collected 1457 flowers from three sites in Greece, two on the Peloponnese and one west of Athens. Of the samples, 72 percent were in the first, female stage of blooming. (These flowers go through two stages, first female, then male.) These samples contained 248 arthropods, but only a collection of Megaselia scalaris — also known as coffin flies — were found carrying pollen, suggesting that it is a typical pollinator of the flower.

How fitting, given the smell.

Before this study, it was presumed that A. microstoma was pollinated by ground dwelling pollinators, such as ants. It isn’t too surprising that flies would be a primary pollinator, though. After bees, flies are the second most important pollinator on theplanet. Many plants have scents and appearances that seem to be trying to attractflies. Unsurprisingly, few of them are known for smelling pleasant.

Fool me once, fool me twice

Between the smell and the location, it is possible the flower simulates a food source or breeding area for the flies well enough to fool them repeatedly.

Additionally, the researchers used gas chromatography to analyze the chemicals and compounds that give the flowers their unique scent. Sixteen compounds were found, including sulfur- and nitrogen-containing molecules, both likely contributors to the powerful odor of the plant.

These compounds included the alkylpyrazine 2,5-dimethylpyrazine. This compound has a unique aroma — decaying beetles, mouse urine, and roasted nuts — so it is unlikely to be used as a perfume. It also can be found in cigarettes and is occasionally used as a food additive for flavor purposes.

Study co-author Stefan Dötterl from the Botanical Gardens at the Paris-Lodron University of Salzburg explained, “Our results suggest that this is the first known case of a flower that tricks pollinators by smelling like dead and rotting insects rather than vertebrate carrion.”

The authors note that the next area of study is to see how fond potential pollinators are of this particular odor. Studies hoping to answer that question are already underway. Let us hope the bugs like it, as it seems nobody else does.

Tags
animalsbiomimicryinsectsplants
In this article
animalsbiomimicryinsectsplants
Related
The Present
Climate change is altering the chemistry of wine
Smoke taint from wildfires is gross, even to wine amateurs.
Life
Our antidepressant drugs are affecting animals and ecosystems
A toxicologist explains the impacts of antidepressants on fish — and no, they’re not getting any happier.
Thinking
Visual thinking: How to understand the inner lives of animals
Humans are good visual thinkers, too, but we tend to privilege verbal thinking.
Life
Scientists use CRISPR to insert an alligator gene into a catfish
Disease kills off 40% of farmed catfish. This gene protects them.
Hard Science
200 years of exploring Antarctica
What we’ve learning from the world’s coldest, most forbidding, and most peaceful continent.
Up Next
The Present
Work-from-home promises and corporate culture “BS” are just burning employees out
Many workers moved home on the promise or hope that they’d be able to keep working remotely at least some of the time after the pandemic ended.