As long as there’s profit in it — and as long as there are those who simply enjoy killing animals — we’re likely to continue losing elephants, and it’s a disturbing loss.

To see these endearing, intelligent creatures taken down by people — humans — is nothing short of heartbreaking. Today, new research, published in the July installement of Nature Geoscience, reveals their decimation isn’t just a moral issue — the loss of forest elephants damages the carbon-storage capacity of the central African forests in which they live.

The researchers write: “Large herbivores such as elephants, can have important effects on ecosystems and biogeochemical cycles.” 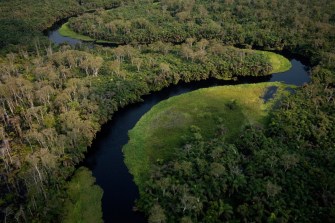 Led by ecologist Fabio Berzaghi of Climate and Environmental Sciences in France, researchers collected field measurements of forests in the Congo basin, comparing the tree densities and composition of areas in which elephants are still present, and areas in which they no longer live. It’s estimated that the animals’ overall population has been reduced 10 percent from historical levels.

What the analysis reveals is that forests in central Africa no longer home to elephants are characterized by a reduction in larger trees, and critically, fewer hard-wood trees. These trees have a more robust CO2 storage capacity than soft-wood trees.

The trick to working out the impact of losing elephants is that their influence on forest ecosystems plays out over a longer term — think 100 years — than the period for which data is available. To address this, the researchers developed computer simulations that exposed changes in the way different types of trees compete for nutrient, water, and light with and without elephants.

The researchers concluded that without the creatures, some three billion tons of carbon would no longer be captured by the forests — that amount is roughly equal to France’s total carbon emissions for 27 years. That’s about a 7 percent reduction in the forests’ ability to absorb the greenhouse gas.

Co-author Chris Doughty sums it up this way: “Our simulations suggest that if elephant loss continues unabated, central African forests may release the equivalent of multiple years of fossil fuel CO2 emissions from most countries, thus potentially accelerating climate change. Therefore, their loss could have a drastic impact both locally and on global climate.” 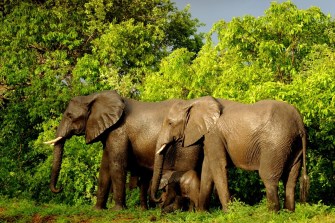 Experts already suspect this link, but the new study for the first time comprehensively quantifies it. Previous guesses about how elephants have such a striking effect on their habitats’ biomass have focussed on seed dispersal via defecation, generally moving things around, and stepping on and crushing small trees. All of these things seem to be true. Berzaghi says, “Forest elephants are natural forest-managers that thin forests by ‘pruning’ or removing small trees which increases the growth of large trees and the production of wood.” 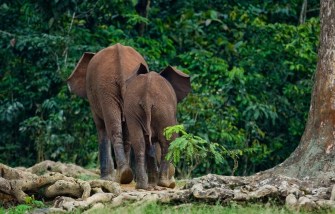 “Our study shows that even at high population densities, forest elephants continue to improve the carbon storage potential of central African forests, so there is no ecological concern for their comeback,” says Berzaghi. Increasing their population size in these forests carries with it no discernible risk.

Their resurgence would also confer benefits beyond better carbon storage. Study co-author Stephen Blake notes that “Forest elephants are the gardeners and guardians of biodiversity in the Congo Basin.” Their seed dispersal alone, according to the study authors, contributes to the germination of over 100 tree species that provide habitats for birds, primates, and insects.

Research sheds light on social behavior of these mysterious predators.
Up Next
The Present

The 2020 Democratic candidate’s plan to give Americans a universal basic income seems to include a special provision for truckers.