Like humans, some animals are capable of culture, including learning from one another. And the cockatoos of Sydney, Australia have learned a neat trick — well, neat for them, anyway. Homeowners with dumpsters might feel differently

Co-lead author of the study Barbara Klump of the Max Planck Institute of Animal Behavior in Konstanz, Germany says, “[C]ompared to humans, there are few known examples of animals learning from each other. Demonstrating that food scavenging behavior is not due to genetics is a challenge.”

An opportunity presented itself in a video that co-author Richard Major of the Australian Museum shared with Klump and the other co-authors. In the video, a sulphur-crested cockatoo used its beak to pull up the handle of a closed garbage bin — using its foot as a wedge — and then walked back the lid sufficiently to flip it open, exposing the bin’s edible contents.

Major has been studyingCacatua galerita for 20 years and says, “Like many Australian birds, sulphur-crested cockatoos are loud and aggressive.” The study describes them as a “large-brained, long-lived, and highly social parrot.” Says Major, “They are also incredibly smart, persistent, and have adapted brilliantly to living with humans.”

(Research regarding some of the ways in which wild animals adapt to the presence of humans has already produced some fascinating results and is ongoing.)

The researchers became curious about how widespread this behavior might be and saw a research opportunity. After all, says John Martin, a researcher at Taronga Conservation Society, “Australian garbage bins have a uniform design across the country, and sulphur-crested cockatoos are common across the entire east coast.”

Martin continues, “In 2018, we launched an online survey in various areas across Sydney and Australia with questions such as, ‘What area are you from, have you seen this behavior before, and if so, when?'” 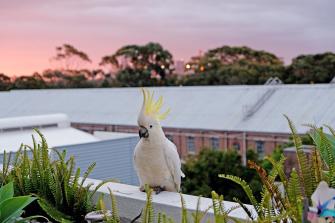 Although the cockatoos’ maneuver was reported in only three suburbs before 2018, by the end of 2019, people in 44 areas reported observing the behavior. Clearly, more and more cockatoos were learning how to successfully dumpster dive.

As further proof, says Klump, “We observed that the birds do not open the garbage bins in the same way, but rather used different opening techniques in different suburbs, suggesting that the behavior is learned by observing others.” One individual bird in north Sydney invented its own method, and the scientists saw it grow in popularity throughout the local population.

To track individual birds, the researchers marked 500 cockatoos with small red dots. Subsequent observations revealed that not all cockatoos are bin-openers. Only about 10 percent of them are, and they are mostly males. The other cockatoos apparently restrict their education to a different lesson: hang around with a bin-opener, and you will get supper.

Thanks to the surveys, the researchers consider the entire project to be a valuable citizen-science experiment. “By studying this behavior with the help of local residents, we are uncovering the unique and complex cultures of their neighborhood birds.”

Tags
animalsbirdscitiescockatoosculturediscoveryintelligencelearning
In this article
animalsbirdscitiescockatoosculturediscoveryintelligencelearning
Related
Life
Scientists use CRISPR to insert an alligator gene into a catfish
Disease kills off 40% of farmed catfish. This gene protects them.
Hard Science
200 years of exploring Antarctica
What we’ve learning from the world’s coldest, most forbidding, and most peaceful continent.
Neuropsych
The trouble with medicating mental illness
Has the “age of psychopharmacology” shrunk society’s sense of responsibility for mental health?
Strange Maps
The great European house cat migration
Ancient bones reveal that domesticated felines were at home in Pre-Neolithic Poland around 8,000 years ago.
Life
How artificial intelligence is helping us decode animal languages
Communication among cetaceans, like whales and dolphins, looks especially promising.
Up Next
The Present
Godzilla and mushroom clouds: How the first postwar nuclear tests made it to the silver screen
The few seconds of nuclear explosion opening shots in Godzilla alone required more than 6.5 times the entire budget of the monster movie they ended up in.