The migration of birds — and we didn’t even used to know that birds migrated; we assumed they hibernated; the modern understanding of bird migration was established when a white stork landed in a German village with an arrow from Central Africa through its neck in 1822 — draws us in the direction of having an understanding of the world. A bird is here and then travels somewhere else. Where does it go? It’s a variation on the poetic refrain from The Catcher in the Rye. Where do the ducks go? How many are out there? What might it encounter along the way?

While there is a yearly bird count conducted every Christmas by amateur bird watchers across the country done in conjunction with The Audubon Society, the Cornell Lab of Ornithology recently released the results of a study that actually go some way towards answering heretofore abstract questions: every fall, as per cloud computing and 143 weather radar stations, four billion birds migrate into the United States from Canada and four billion more head south to the tropics. 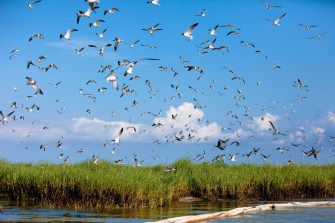 “In the spring,” the lead author Adriaan Dokter noted, “3.5 billion birds cross back into the U.S. from points south, and 2.6 billion birds return to Canada across the northern U.S. border.“

Part of the answer could be very well be what you might hear from a conservationist — only with numbers to back it up: the U.S. isn’t built for birds. As Ken Rosenberg, the other co-author of the study, notes: “Birds wintering in the U.S. may have more habitat disturbances and more buildings to crash into, and they might not be adapted for that.”

The other option is that birds lay more offspring in the U.S. than those who fly south for the winter. 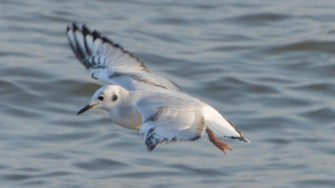 A Bonaparte’s Gull landing on the water.

What does observing eight billion birds mean in practice? To give myself a counterpoint to those numbers, I drove out to the Joppa Flats Education Center in Northern Massachusetts. The Center is a building that sits at the entrance to the Parker River National Wildlife Refuge and overlooks the Merrimack River, which is what I climbed the stairs up to the observation deck to see.

Once there, I paused. I took a breath. I listened. I looked out into the distance. Tiny flecks of Bonaparte’s Gulls drew small white lines across the length of the river and the wave of the grass toward a nearby city. What appeared to be flecks of double-crested cormorants made their way to the sea. A telescope downstairs enabled me to watch small gull-like birds make their way along the edges of the river, quietly pecking away at food just beneath the surface of the water. This was the experience of watching maybe half a dozen birds over fifteen-to-twenty minutes, which only served to drive home the scale of birds studied.

Tags
birdsnaturescienceSurprising Science
In this article
birdsnaturescienceSurprising Science
Related
The Well
The 3 “demons” that haunted legendary scientists
Darwin, Descartes, and Maxwell all believed in these science ‘demons.’
▸
7 min
—
with
Jimena Canales
Harvard professor debunks the biggest exercise myths
Exercise culture is crazy. But what you need to do is exceedingly simple.
▸
with
Daniel Lieberman
Videos
NASA astronaut explains humanity’s trajectory to Mars
The first human that isn’t an Earthling could be in our lifetime.
▸
5 min
—
with
Robert Curbeam
Videos
Are you developing Alzheimer’s?
Only 2% of Alzheimer’s is 100% genetic. The rest is up to your daily habits.
▸
9 min
—
with
Lisa Genova
Videos
Michio Kaku: “We need a second planet”
Humans won’t survive if we stay on Earth. Michio Kaku explains.
▸
7 min
—
with
Michio Kaku
Up Next
Health
How does alcohol affect your brain?
Explore how alcohol affects your brain, from the first sip at the bar to life-long drinking habits.