An international team of scientists have been on a quest. They have traveled to Africa, South America, and South East Asia. They have scaled cliff faces, explored shadow-stained caves, bushwhacked through sweltering jungles, and dodged dangerous wildlife. What treasure did they seek: a golden idol, an ancient codex, a city lost to time?

Nope. They endured all this to procure a blood-sucking parasite that most of us can’t wait to be rid of: bedbugs. For 15 years, these scientists traveled the world collected specimens of the family Cimicidae. Their goal was to create a molecular phylogeny — essentially a bedbug ancestral tree mapped through DNA analysis.What they found surprised them. 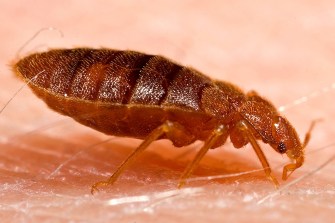 A bedbug ingests its bloody meal on a human host. Though we do all we can to be rid of them, bedbugs survived the extinction event that wiped out the dinosaurs. (Photo: CDC/Wikimedia Commons)

Bedbugs were previously thought to have evolved with bats, their most common, and long-assumed first, hosts. This origin story kick-starts the bedbug lineage roughly 50 million years ago.

To learn more about these infectious pests, researchers began collecting as many bedbug species they could. Natural history museums and colleagues donated some specimens, but others had to be obtained in the field.

Over the course of 15 years, the scientists traveled the world collecting bedbugs from their natural hosts. These travels took them in proximity to dangerous wildlife like buffalo and leopards, not to mention a few wadings through knee-high guano. In the end, they collected 34 Cimicidae species from 62 locations.

After mapping their molecular phylogeny, the team discovered that bedbugs evolved about 115 million years ago. This new lineage predates bats by about 50 million years, stretching back into the Cretaceous period. Bedbugs roamed the earth alongside dinosaurs such as Triceratops, Velociraptor, and Tyrannosaurs rex.

The team published their results in Current Biology earlier this month.

“To think that the pests that live in our beds today evolved more than 100 million years ago and were walking the earth side by side with dinosaurs was a revelation. It shows that the evolutionary history of bedbugs is far more complex than we previously thought,” Professor Mike Siva-Jothy, study co-author from the University of Sheffield’s Department of Animal and Plant Sciences, said in a release.

This also means that bedbugs survived the K-T extinction event, the cataclysmic end of the Mesozoic era that saw the extinction of approximately 70 percent of all species living at the time, including, of course, dinosaurs. This puts bedbugs in league with nature’s other K-T survivors and all-around badasses sharks, crocodiles, cockroaches, and the platypus.

Did bedbugs nosh on T-rex?

Probably not. While bedbugs evolved alongside the king of the thunder lizards, they likely didn’t feed on its blood or any other dinosaur species. As the researchers point out, bedbugs and their relatives favor hosts who have “homes”: birds with their nests, bats with their roosts, and humans with their beds. Dinosaurs likely employed a drifter lifestyle, and so wouldn’t have been a favored host.

But if neither bats nor dinosaurs were the bedbug’s original host, who was? We don’t know. The species original host remains elusive.

If that answer is unsatisfactory, take heart that avian dinosaurs — or, as they are commonly known, birds — remain a potential candidate.

Others believe bats, or a bat ancestor, are still in the mix. “The fossil record for [both bed bugs and mammals] are patchy…that makes it hard to make definitive statements,” Jessica Ware, an entomologist and evolutionary biologist at Rutgers University, told PBS. “It’s possible bats are older, and we’ve just underestimated.”

The researchers then used their data to explore the frequency at which bedbugs jump from one host to another. Broadly speaking, some bedbugs become specialized to a single host, but others are more generalized and able to jump between hosts.

The bedbugs that pester humans, Cimex lectularius and Cimex hemipterus, are just two of more than 100 Cimicidae species. These human-gorging bedbugs were thought to have diverged around the time our species entered the game of life — as is true of other human parasites such as lice.

However, the data showed that these bedbugs had evolved already, likely on bats. They opportunistically began snacking on slumbering humans when our species began using caves as dwellings. Throughout our shared history, a new bedbug species has jumped to human hosts about every 500,000 years. However, the way humans have reshaped our environments may speed up that pace.

“These species are the ones we can reasonably expect to be the next ones drinking our blood, and it may not even take half a million years, given that many more humans, livestock, and pets that live on earth now provide lots more opportunities,” Professor Klaus Reinhardt, study co-led and bedbug researcher at Dresden University, said in the same release.

According to Siva-Jothy, the team hopes their findings will allow us to better understand the history and abilities of these pests. Understanding their evolution may help us control their ability to spread and transmit diseases to humans.

Let’s hope that squid don’t evolve lungs and legs, or humanity might be in real trouble.
Up Next
Health

How opioid abuse is lowering our average life expectancy

Normally, life expectancy increases every year. For Americans, the opioid epidemic is changing that.