One of the most interesting natural organizations studied by scientists are microbial mats, communities of cyanobacteria (AKA, “blue-green algae”). These fascinating self-contained ecosystems are visible to the naked eye and can be found all over the place: in lakes and streams, in soil, and even in man-made environs such as gutters and drinking fountains. Given enough time — say two to three thousand years — microbial mats fossilize layer-by-layer into carbonized stromatolites, our oldest fossils. They’ve been doing this for about 3.7 billion years.

Scientists believe these ancient microbial photosynthesizers are responsible for the oxygen we breathe. Prior to their arrival, the planet’s atmosphere was only about 1 percent oxygen. What could they have been breathing for the first 1.5 billion years, and how did they execute photosynthesis without oxygen?

In a new study published in Communications Earth & Environment, researchers led by Pieter T. Visscher from the University of Connecticut present a convincing answer to the puzzle: The Earth’s early oxygen-producing microbes were breathers and photosynthesizers of arsenic, however poisonous to us that may be now.

Photosynthesis chiefly requires sunlight, water, and CO2. The CO2 gets broken down into carbon and oxygen — the plant uses some of this oxygen and releases the rest. Without oxygen molecules, though, how did this work?

There have been a few oxygen stand-ins proposed. Photosynthesis can work with iron molecules, but fossil-record evidence doesn’t support that idea. Hydrogen and sulphur have also been proposed, though evidence for them is also lacking.

The spotlight began to shift to arsenic in the first decade of the millennium when arsenic-breathing microbial mats were discovered in two hypersaline California lakes, Searles Lake and Mono Lake. In 2014, Visscher and colleagues unearthed indications of arsenic-based photosynthesis, or “arsenotrophic,” microbial mats deep in the fossil record of the Tumbiana Formation of Western Australia.

Still, given the ever-shifting geology of the planets, the fractured ancient fossil record makes definitive study of ancient arsenotrophic photosynthesis difficult. The fossil record can’t identify the role of the arsenic it reveals: was it involved in photosynthesis or just a toxic chemical that happened to be there?

Then, last year, arsenic-breathing microorganisms were discovered in the Pacific Ocean. A sulphur bacterium, Ectothiorhodospira sp. was also recently found to be metabolizing arsenic into arsenite in Big Soda Lake in Nevada. 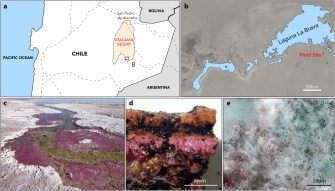 The study reports on Visscher’s discovery of a living microbial mat thriving in an arsenic environment in Laguna La Brava in the Atacama Desert in Chile. “We started working in Chile,” Visscher tells UConn Today, “where I found a blood-red river. The red sediments are made up by anoxogenic photosynthetic bacteria. The water is very high in arsenic as well. The water that flows over the mats contains hydrogen sulfide that is volcanic in origin and it flows very rapidly over these mats. There is absolutely no oxygen.”

The mats had not previously been studied, and the conditions in which they live are tantalizingly similar to those of early Earth. It’s a high-altitude, permanently oxygen-free state with extreme temperature swings and lots of UV exposure.

The mats that somewhat resemble Nevada’s purple Ectothiorhodospira sp. are going about their business of making carbonate deposits, forming new stromatolites. Most excitingly, those deposits contain evidence that the mats are metabolizing arsenic. The rushing waters surrounding the mats are also rich in hydrogen sulphide and arsenic.

Says Visscher, “I have been working with microbial mats for about 35 years or so. This is the only system on Earth where I could find a microbial mat that worked absolutely in the absence of oxygen.”

Not that Earth is the only place where this could happen. Visscher notes that the equipment they used for studying the Laguna La Brava mats is not unlike the system aboard the Mars Perseverance Rover. “In looking for evidence of life on Mars, they will be looking at iron, and probably they should be looking at arsenic also.”

A food safety researcher explains another way to know what’s too old to eat.
Health

The good news is that it can be countered with acne medication.
Health

There’s a fatal prion infection killing deer and elk across North America.
Up Next
Hard Science