The sooner you expose a baby to a second language, the smarter they’ll be

Just hearing two languages helps babies develop cognitive skills before they even speak. Here's how - and how you can help them develop those skills. 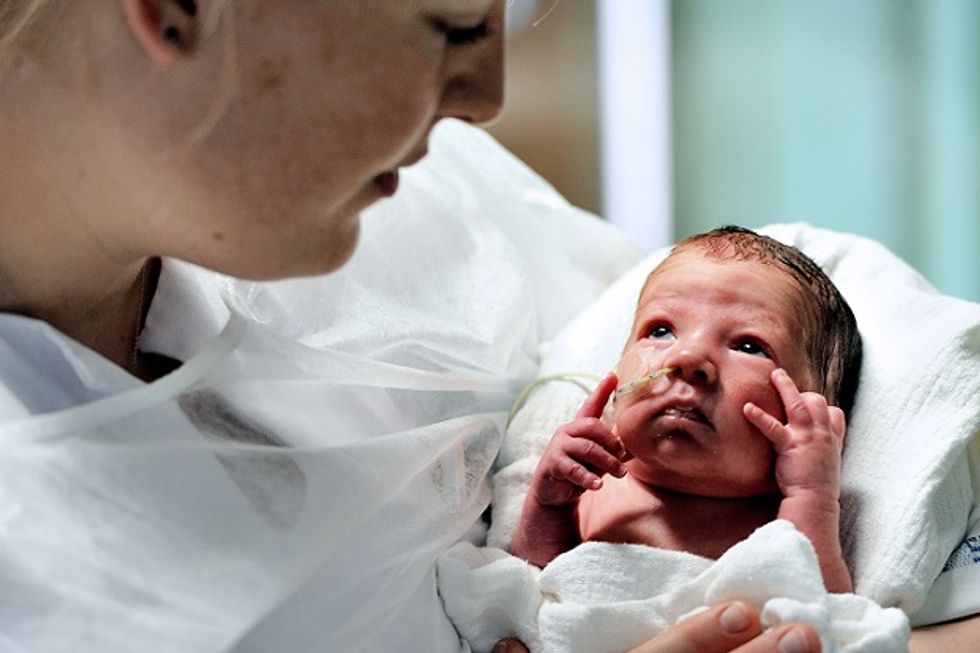 A new study shows that babies raised in bilingual environments develop core cognitive skills like decision-making and problem-solving -- before they even speak.

The study, out of the University of Washington, tested 16 babies. Half came from English-speaking households and half came from English- and Spanish-speaking households. The babies listen to a variety of speech sounds, from preverbal to English- and Spanish-specific sounds. Researchers monitored the babies' responses to the sounds using magnetoencephalography (MEG), which helped them clearly identify which parts of the brain were activated via electromagnetic activity. You will never see a more cuddly scientific setup:

The babies from English- and Spanish-speaking households had lots of activity in the prefrontal cortex and orbitofrontal cortex -- the regions of the brain responsible for executive functions, like decision-making and problem-solving. “Our results suggest that before they even start talking, babies raised in bilingual households are getting practice at tasks related to executive function," said lead author Naja Ferjan Ramírez in a press release. "Babies raised listening to two languages seem to stay 'open' to the sounds of novel languages longer than their monolingual peers, which is a good and highly adaptive thing for their brains to do," co-author Patricia Kuhl said in the same release.

That adaptive mechanism reaps enormous benefits for both babies and adults. Many studies, like this one out of the National Center for Biotechnology Information, have shown that bilingual adults have better executive brain functions than adults who only speak one language. That means bilingual adults are better able to switch focus between tasks, recall memories, and demonstrate higher-level problem-solving and planning skills. Bilingual kids demonstrate those skills, too. Plus, all of those executive brain functions are key to success in school, and academic success is a big indicator of long-term happiness. Learning another language can even help prevent or delay the onset of degenerative brain diseases like dementia or Alzheimer's for older adults.

Basically, there is no downside to being bilingual -- and the best time to start is early. “Our results underscore the notion that not only are very young children capable of learning multiple languages, but that early childhood is the optimum time for them to begin," Ferjan Ramírez concluded. Neuroscientist Sam Wang agrees with her:

The best part is that you can raise a bilingual child -- even if you're not bilingual. Here are some tips from the Linguistic Society:

If you're already bilingual, or part of a bilingual household, then try the “one parent, one language" method. Basically, clarify which parent speaks which language to the baby. That way, everyone knows what to expect - and your baby knows how to respond.

If you aren't already bilingual, that's okay! You can still expose your child to different languages. Lots of foreign words make their way into English. You can point out foreign foods every time you have them, or watch a bilingual show with your child. As long as you expose them to the foreign words in a consistent way with the same context, they'll reap the benefits.

Try using a Language Exchange community, where you and your child can speak another language with native speakers together. You'll both reap the benefits with constant practice.

Now get out there and reap those cognitive benefits!