Meet the 2016 Olympics Refugee Team That Will Inspire the World

One year ago, Syrian refugee Yusra Mardini was swimming for her life in the Mediterranean Sea, desperate to escape her war torn country. This week, she will swim for gold at the 2016 Olympic Games in Rio de Janeiro. 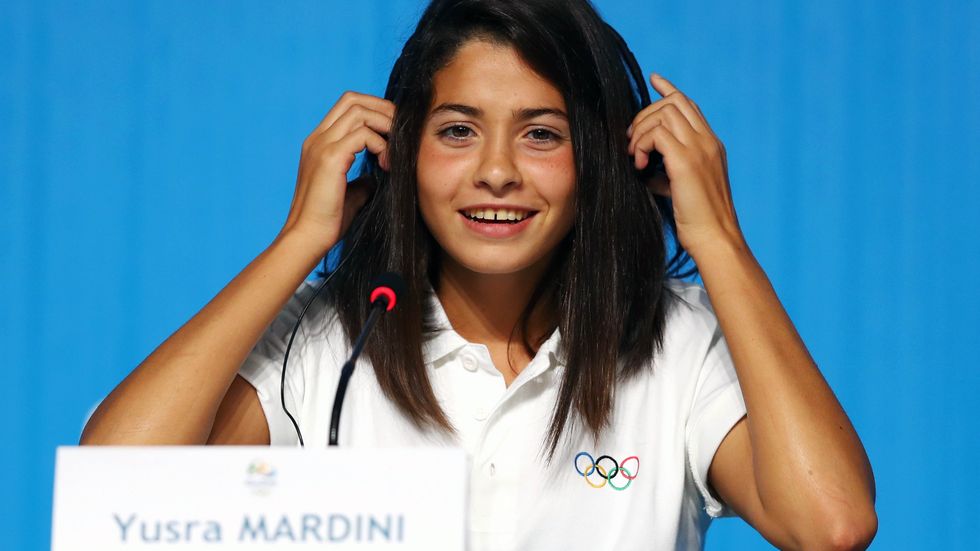 One year ago, Syrian refugee Yusra Mardini was swimming for her life in the Mediterranean Sea, desperate to escape her war torn country. This week, she will swim for gold at the 2016 Olympic Games in Rio de Janeiro, Brazil, not under the flag of her home country, but as part of the first-ever refugee team created by the Olympics’ governing board

Mardini is from Syria. Last August, Yusra and her sister Sarah fled Syria due to the violent ongoing war. Yusra was only 17. She and Sarah ran through Lebanon, Turkey, Greece, the Balkans, and Central Europe before settling safely in Germany. It took them a month, and they were lucky to escape capture and death at every single turn. Particularly when the dinghy they were sailing in with scores of other refugees began to sink. It was there, in the waters between Turkey and Greece, where Yusra and Sarah swam for their lives. They towed the dinghy and everyone on it to safety.

Yusra is 18 now and living happily in Germany with her family, according to The New York Times. She is grateful that she and Sarah were both competitive swimmers in Syria, and able to help that fateful day in the dinghy. But she is also the face of the newly formed Olympic Refugee Team - and only one story of extraordinary bravery.

The 10-person refugee athletic team, officially sanctioned by the International Olympic Committee, is the first of its kind. While refugee athletes have participated in past Olympic games, either on behalf of the country they resettled in or as part of a special "independent" category with no national identity, the 2016 team has a different mission. They want to represent the biggest flag in the world: the globe. Chosen from a pool of 43 candidates officially recognized by the United Nations as refugees, these are the 10 with the greatest Olympic potential, and their stories are just as powerful as Mardini’s:

Rami Anis is an internationally competitive swimmer originally from Syria. The 25-year-old also fled his homeland because of the war, but not because of the violence: he didn’t want to be forced into the army. He fled to Istanbul to live with his brother, but lives in Belgium now. "I'm very proud to be here,” he admitted in an IOC press conference this past Saturday. “But I feel a bit of sadness that I'm not participating as a Syrian.”

Popole Misenga is a 24-year-old Olympic Judoka. He is originally from Bukavu, the most war-torn part of the Democratic Republic of Congo. He was 9 when the civil war broke out and tried to flee with his family, only to get separated and spend 8 days hiding on his own in the jungle. He was rescued 8 days later, and ultimately fled to Brazil with fellow Judoka and teammate Yolande Bukasa Mabika. Misenga tearfully described the ordeal at the IOC press conference, saying "I have two brothers that I haven't seen for years. I don't remember their faces… I'm here in Brazil participating so that one day I can bring them to live with me here in Brazil."

Yolande Bukasa Mabika is another Olympic Judoka from the Democratic Republic of Congo. She is also from Bukavu and fled the DRC because of its violent civil war. Mabika began her training at age 10 and originally represented the DRC in international competitions, but when her training conditions became dangerous due to the war she and Misenga fled to Brazil.

Yiech Pur Biel is an Olympic runner originally from Nasir, South Sudan. He fled South Sudan with relatives to escape ongoing war, leaving his parents behind. He now lives in Kenya with those relatives and has never returned to his homeland.

James Nyang Chiengjiek is another Olympic runner originally from South Sudan. His father was a soldier who died at the beginning of the war in 1999. Chiengjiek fled South Sudan to avoid being drafted as a boy soldier, arriving at Kenya’s Kakuma refugee camp in 2002. He was supported by the United Nations High Commission for Refugees (UNHCR), and from there was able to go to school and join the Tegla Loroupe Foundation where he began his running career in 2013.

Yonas Kinde is an Olympic marathon runner originally from Ethiopia. He is very reserved about his past, but excited about his chance to compete on the world’s stage during the Olympics. He shares his story here:

Anjaline Nadai Lohalith is another Olympic runner originally from South Sudan. Like Chiengjiek, she landed in Kenya’s Kakuma refugee camp after fleeing her homeland with her aunt in 2002. She ran for many competitions in high school, but was encouraged to participate in the Tegla Loroupe Foundation last year. Her encouraging results catapulted her athletic career.

Rose Nathike Lokonyen is also originally from South Sudan. Like Lohalith, she is also a runner who trained in the Tegla Loroupe Foundation and used that opportunity to begin an athletic career. Lokonyen fled South Sudan with her family in 2002, but her parents went back in 2008.

Paulo Amotun Lokoro is also originally from South Sudan. Like Chiengjiek, he tended cattle in his homeland before being forced to flee the war. Like the other runners, he ended up at Kakuma and participated in the Tegla Loroupe Foundation’s athletics program. The 24-year-old athlete was reunited with his mother at the camp after being separated during their escape in 2004.

“We are representing people who have lost their human rights and are facing injustices," Anis said at the IOC press conference. That was not an understatement. In order for athletes to compete at the Olympics, they must belong to an International Federation, or republic with a history of competition for an official Olympic sport. These athletes, while highly qualified, were ineligible simply because they were no longer in their nation. However, the International Olympic Committee (IOC) made an exception this year and created the first ever refugee team.

”This will be a symbol of hope for all the refugees in our world,” said IOC President Thomas Bach in a statement on the IOC’s website, “and will make the world better aware of the magnitude of this crisis. It is also a signal to the international community that refugees are our fellow human beings and are an enrichment to society.”

“I hope you're going to learn from our story: that you have to move on, because life will never stop for your problems," Mardini said at the IOC press conference.

I think we already have, Yusra.