Mother Teresa: Are Saints As Perfect As They Used to Be?

Mother Teresa will be canonized this Sunday, September 4th. What does it take to become a saint, and is the Vatican mistaken to not address Mother Teresa's flaws? 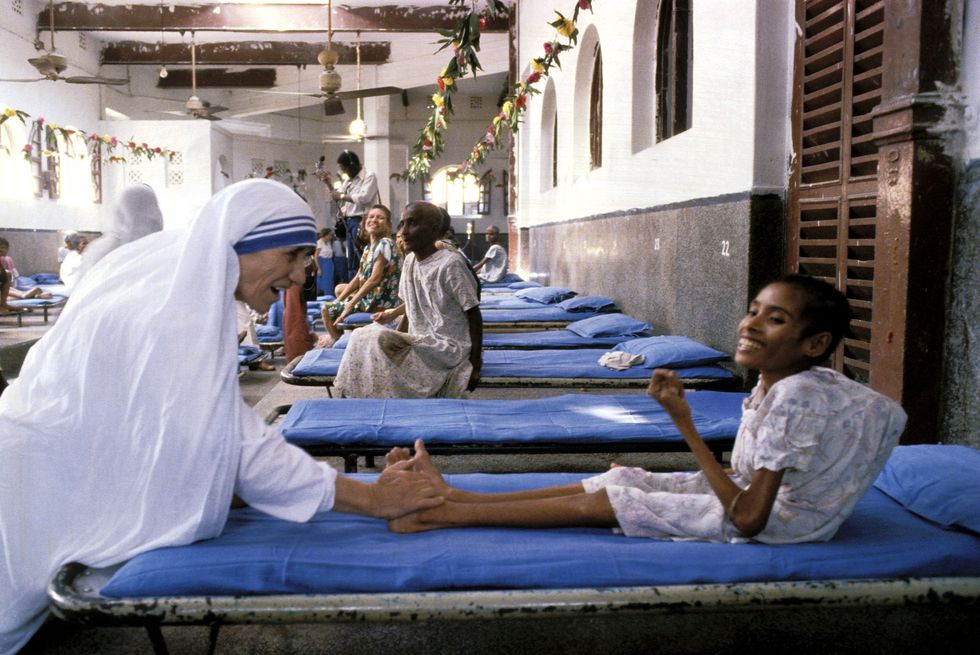 Mother Teresa and the poor in Calcutta, India in October, 1979. (Photo by Jean-Claude FRANCOLON/Gamma-Rapho via Getty Images)

Saints are the highest tier of role models. In the early days of the Roman Catholic Church, Biblical heroes like Noah, Moses, and John the Baptist were shoe-ins for sainthood because of their great acts of faith. Later Christian heroes like Stephen (who was the first Christian martyr), Augustine (whose writings largely influenced modern Christianity), and Patrick (the missionary who brought Catholicism to Ireland) also easily fit the criteria for sainthood. Their deeds were without reproach. But today? Either people simply aren’t as perfect, or information is more accessible. Take Mother Teresa.

According to The New York Times, on Sunday September 4th Mother Teresa will officially be recognized as a saint by Pope Francis. The nun and missionary is best known for her feeding and providing basic medical care to poor children in Kalkota (formerly Calcutta), India. She also founded religious orders in over 130 countries to continue helping the poor and has inspired people all over the world with her deeds. She certainly sounds like a saint.

However the process of canonization, or officially recognizing someone as a saint, is more complicated than that. There are three criteria candidates have to meet before being officially considered for sainthood by the church, according to Free Republic.

Candidates need to be dead for at least five years in order to let any contrary evidence come to light (Pope John Paul II waived that requirement for Mother Teresa, reports the Portland Press Herald)

Candidates can’t have been officially worshipped as a saint

Once those criteria are met, there are several steps to becoming a saint. I found the best summary of them here.

Venerable: After the Vatican Congregation for the Causes of Saints determines that the servant of God lived a life of heroic virtue, she is granted the title of venerable. Heroic virtue doesn’t mean a person was perfect or sinless, but that she worked aggressively to improve herself spiritually and never gave up trying to be better and grow in holiness.

Blessed: After the Church establishes one miracle, the venerable person’s cause is presented to the pope to see whether he deems her worthy of being called blessed. This step is called beatification and is the next-to-last step.

Saint: Another miracle and the blessed person’s cause is presented to the pope again for his judgment. If he determines that the evidence is clear and that contrary reports aren’t credible, he may initiate the canonization procedure. If all goes well, the candidate is publicly recognized as a saint

Mother Teresa has gone through the entirety of that process thanks to Reverend Brian Kolodiejchuk. Kolodiejchuk is a Canadian priest and member of the Missionary of Charity Fathers. Since her death in 1997, Kolodiejchuk has acted as her postulator, an advocate who gathers evidence and pleads the candidate’s case. “They’re quite strict on these things,” Kolodiejchuk explained in The New York Times piece cited above.

He was specifically referring to the miracle verification process, which is rigorous. “In the India case for Mother Teresa [her beatification miracle], there were 11 doctors consulted, and only one was Catholic. The rest were Hindu. You don’t ask the doctors whether they think it’s a miracle. You only ask them “Can you explain this medically?”” If the doctors can’t, then the church declares the act a miracle. Because both miracles need to be performed posthumously and verified independently, doctors’ opinions can make or break a case for sainthood. “In Brazil, a postulator I knew on another sainthood cause received the news that the miracle he had put forth was rejected,” Kolodiejchuck told The Times, “so it isn’t automatic.”

Both Mother Teresa’s miracles passed scrutiny, but she still has her detractors. One doctor who doesn’t quite believe her is Dr. Aroup Chatterjee, a Kolkata native who now lives in London. Growing up in Kolkata, he was “bothered by the narrative surrounding Mother Teresa, beginning with the city’s depiction as one of the most desperate places on earth, a “black hole”,” according to The New York Times. Dr. Chatterjee’s experience of the city was completely different, “cosmopolitan, even moneyed,” he told The Times. His later work in the city’s slums also didn’t reflect the image of servitude cultivated by Mother Teresa: “I never even saw any nuns in those slums I used to work in,” he told The Times. “I just thought that this myth had to be challenged.”

So he spent hundreds of hours doing his own research. That research culminated in the 2003 book Mother Teresa: The Final Verdict. His findings were upsetting. For starters, he wrote there was a “cult of suffering” in the homes run by Mother Teresa’s Missions of Charity organization, “with children tied to beds and little to comfort dying patients but aspirin,” reports The Times. “Mother Teresa took her adherence to frugality and simplicity in her work to extremes, allowing practices like the reuse of hypodermic needles and tolerating primitive facilities that required patients to defecate in front of one another.”

That research inspired Dr. Chatterjee to make a documentary about Mother Teresa’s work. Titled Hell’s Angel, the film would ultimately be a scathing exposé presented by renowned skeptic Christopher Hitchens. For the next year, Dr. Chatterjee traveled the world and conducted over a hundred interviews. The Times reports that “Dr. Chatterjee heard volunteers describe how workers with limited medical training administered 10- to 20-year-old medicine, and blankets stained with feces were washed in the same sink used to clean dishes.”

There are also reports that Mother Teresa befriended “dictators like Enver Hoxha in Albania and Jean-Claude Duvalier of Haiti,” in order to obtain funding for her operations, The Times reports. Kolodiejchuk and the Vatican Congregation investigated all those allegations. “We have to take them seriously,” Kolodiejchuk said in The Times piece. “But some of it is mistaken information. Mother never took any money from Duvalier.” The team also discovered that the visit to Enver Hoxha was protocol for all foreign visitors.

Regarding the unsafe medical practices permitted by Mission of Charity, Kolodiejchuk and the Vatican team interviewed Christopher Hitchens, referencing “his movie” Hell’s Angels. They did not speak to Dr. Chatterjee, who conducted the interviews and gathered the information. The Times piece gives no reason why.

Despite being ignored by Kolodiejchuk and the Vatican team, Dr. Chatterjee's persistence in voicing his criticisms is paying off. The Missions of Charity have been literally cleaning up their act. “Several nuns have undergone training to ‘spruce up their medical background’ and the general upkeep of facilities has improved,” reports The Times. “Speech therapists and physiotherapists are regularly consulted to look after patients with physical and mental disabilities. And nuns say they frequently take patients who require surgery and more complicated care to nearby hospitals.” The reuse of needles was eliminated after Mother Teresa’s death.

Still, that the Roman Catholic Church wants to hold Mother Teresa up as a role model for the ages without having spoken to her largest critic is troublesome. By focusing on Mother Teresa’s image of caretaker to the poor rather than publicly addressing her flaws, the church seems old-fashioned at best -- and outdated at worst. With attendance in worldwide decline according to Pew Research, the Catholic church could do more to inspire its congregation. Painting its role models as people who did great things despite being flawed would be a great start. They missed an opportunity with Mother Teresa. Hopefully, it won’t be the last opportunity they get.